Amidst a rash of officers' resignations during the Second Seminole War, President Jackson endorses a document outlining a succession plan 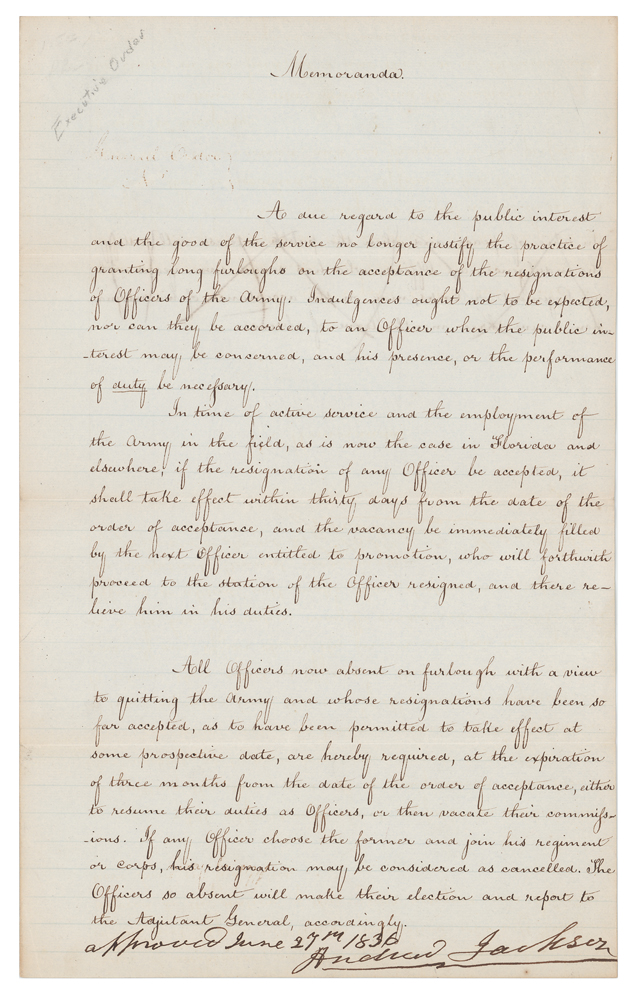 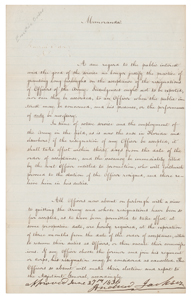 Amidst a rash of officers' resignations during the Second Seminole War, President Jackson endorses a document outlining a succession plan

Manuscript DS as president, signed "Approved, June 27th 1836, Andrew Jackson,” one page, 7.75 x 12.5, June 27, 1836. Draft of an official 'General Regulation' relative to the granting of leaves of absence, on the acceptance of the resignations of Officers of the Army, published as part of General Order No. 43 of 1836. In full: "A due regard to the public interest and the good of the service no longer justify the practice of granting long furloughs on the acceptance of the resignations of Officers of the Army. Indulgences ought not to be expected, nor can they be accorded, to an Officer when the public interest may be concerned, and his presence, or the performance of duty be necessary. In time of active service and the employment of the Army in the field, as is now the case in Florida and elsewhere, if the resignation of any Officer be accepted, it shall take effect within thirty days from the date of the order of acceptance, and the vacancy be immediately filled by the next officer entitled to promotion, who will forthwith proceed to the station of the Officer resigned, and there relieve him in his duties. All Officers now absent on furlough with a view to quitting the Army and whose resignations have been so far accepted, as to have been permitted to take effect at some prospective date, are hereby required, at the expiration of three months from the date of the order of acceptance, either to resume their duties as Officers, or then vacate their commissions. If any Officer choose the former and join his regiment or corps, his resignation may be considered as cancelled. The Officers so absent will make their election and report to the Adjutant General, accordingly." In fine condition.

In this significant executive document, President Jackson references the "employment of the Army in the field, as is now the case in Florida," where the United States was engaged in the Second Seminole War. Jackson had famously commanded troops in Florida during the First Seminole War, which led to the annexation of Florida from Spain; Jackson then served as Florida's first territorial governor. As president, Jackson aimed to force the Seminoles to leave Florida altogether and move to Indian Territory, as per the Indian Removal Act of 1830. During this period, an assignment to Florida was not at all appealing: poor pay, lack of advancement opportunities, tropical disease, and the capable enemy were factors that contributed to over 200 officers' resignations during the first three years of the war. By this document, Jackson provided directions so that the Army could deal with this rash of resignations, ensuring continuity of America's troops in Florida and elsewhere.