"The endless problems generated by our great FREEDOM MOVEMENT can only be compared to a river that never stops flowing"—a historical letter to Sammy Davis, Jr., praising the ground-breaking 1961 Carnegie Hall tribute show—punctuated with a handwritten postscript from King regarding a “letter to Frank Sinatra” 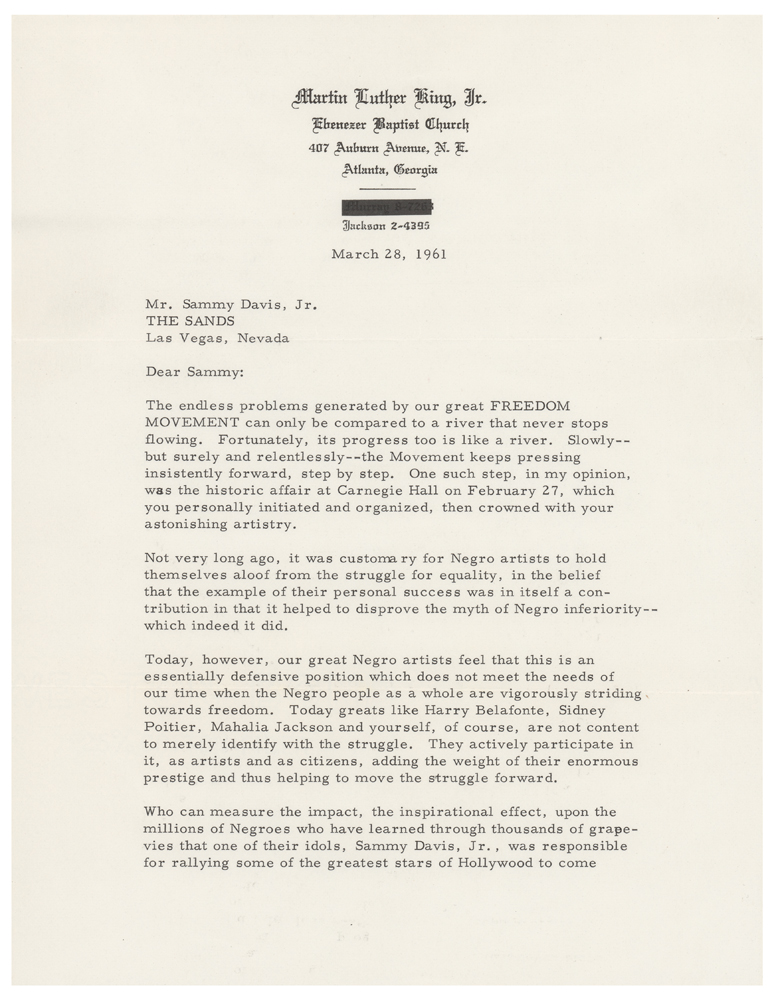 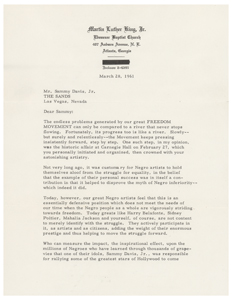 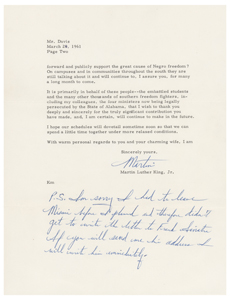 "The endless problems generated by our great FREEDOM MOVEMENT can only be compared to a river that never stops flowing"—a historical letter to Sammy Davis, Jr., praising the ground-breaking 1961 Carnegie Hall tribute show—punctuated with a handwritten postscript from King regarding a “letter to Frank Sinatra”

TLS signed “Martin,” two pages, 8.5 x 11, personal letterhead, March 28, 1961. Reverend King writes to legendary entertainer Sammy Davis, Jr., thanking him for organizing the successful Carnegie Hall benefit concert 'Tribute to Martin Luther King, Jr.," in full: "The endless problems generated by our great FREEDOM MOVEMENT can only be compared to a river that never stops flowing. Fortunately, its progress too is like a river. Slowly—but surely and relentlessly—the Movement keeps pressing insistently forward, step by step. One such step, in my opinion, was the historic affair at Carnegie Hall on [January] 27, which you personally initiated and organized, then crowned with your astonishing artistry.

Not very long ago, it was customary for Negro artists to hold themselves aloof from the struggle for equality, in the belief that the example of their personal success was in itself a contribution in that it helped to disprove the myth of Negro inferiority—which indeed it did.

Today, however, our great Negro artists feel that this is an essentially defensive position which does not meet the needs of our time when the Negro people as a whole are vigorously striding towards freedom. Today greats like Harry Belafonte, Sidney Poitier, Mahalia Jackson and yourself, of course, are not content to merely identify with the struggle. They actively participate in it, as artists and as citizens, adding the weight of their enormous prestige and thus helping to move the struggle forward.

Who can measure the impact, the inspirational effect, upon the millions of Negroes who have learned through thousands of grapevines [sic] that one of their idols, Sammy Davis, Jr., was responsible for rallying some of the greatest stars of Hollywood to come forward and publicly support the great cause of Negro freedom? On campuses and in communities throughout the south they are still talking about it and will continue to, I assure you, for many a long month to come.

It is primarily in behalf of these people—the embattled students and the many other thousands of southern freedom fighters, including my colleagues, the four ministers now being legally persecuted by the State of Alabama, that I wish to thank you deeply and sincerely for the truly significant contribution you have made, and, I am certain, will continue to make in the future. I hope our schedules will dovetail sometime soon so that we can spend a little time together under more relaxed conditions. With warm personal regards to you and your charming wife." King adds a crisp handwritten postscript: "P.S. I'm sorry I had to leave Miami before I planned and therefore didn't get to write the letter to Frank Sinatra. If you will send me his address I will write him immediately." In fine condition.

In the long history of the ongoing Civil Rights movement, the 'Tribute to Martin Luther King, Jr.,' at Carnegie Hall provided a momentous turning point in the New York winter of 1961. Widely deemed the most prestigious concert stage in the United States, Manhattan’s famed Carnegie Hall was a far cry from the SCLC’s normal fund-raising efforts held in modest Southern churches where money was collected but admission was free. Designed to appeal to a crowd where cost was of little issue, namely an upper-middle-class white audience, ticket prices to attend the star-studded event ranged from $3 to $200; for some, it was a small price to pay to see the hottest group in show business, the Rat Pack, at the most renowned concert hall in America.

The celebrity support of Sammy Davis, Jr., and Frank Sinatra was integral to the tribute’s rousing, record-breaking success, which resulted in the SCLC netting $22,000 -- one quarter of what King and his organization had hoped to raise all year. Moreover, the night’s effect on the public perception reverberated across the country, elevating Rev. King from a little-known figure to a household name overnight. This change was in large part due to the promotion of Rat Pack members Sammy Davis, Jr., who organized the event and served as its tireless emcee, and Frank Sinatra, who at the time was arguably the most influential man in America.

Interestingly, King’s lengthy postscript, in which he opts to discard the middleman and write to Sinatra personally, is in itself quite telling: “I'm sorry I had to leave Miami before I planned and therefore didn't get to write the letter to Frank Sinatra. If you will send me his address I will write him immediately.” This message seems to reveal King’s relative indifference to the Sinatra or celebrity ‘glow,’ while placing himself square on the crooner’s level by asking for his personal address. Still, the postscript is not without gratitude, and both King and Sinatra, two icons of the 20th century, would in the future join forces on behalf of Civil Rights. The leadup to their first collaboration, however, was not without a certain amount of complication.

While Davis focused on the King tribute, Sinatra was busy organizing an inauguration gala for John F. Kennedy, whose recent role in the release of King from an Atlanta jail in late October helped him secure the black vote and, in turn, the 1960 presidential election. Three days before the Kennedy gala, Davis and his new wife, Swedish actress May Britt, were asked not to attend the festivities; Kennedy’s counsel, ostensibly his father, Joseph Kennedy, believed the presence of a mixed-race couple would potentially offend the attending Southern Democrats. The snub and all of its political hypocrisy hurt Davis deeply, of this King himself was undoubtedly aware; his brief valediction, “warm personal regards to you and your charming wife,” reads with a genuine warmth and understanding of the trials the couple endure.

The event, which Davis cited ‘as one of the most magnificent things I have ever done,’ not only helped expand the SCLC’s fund-raising operation, but the star-studded homage effectively made King one himself, an opportunistic position that he would not squander. This turn of events, bolstered by King’s increase in speaking engagements, transformed the SCLC from an organization-in-waiting to a strong political force. A superb, historically significant letter between famous friends and Civil Rights champions, men who forever helped shape our modern world.