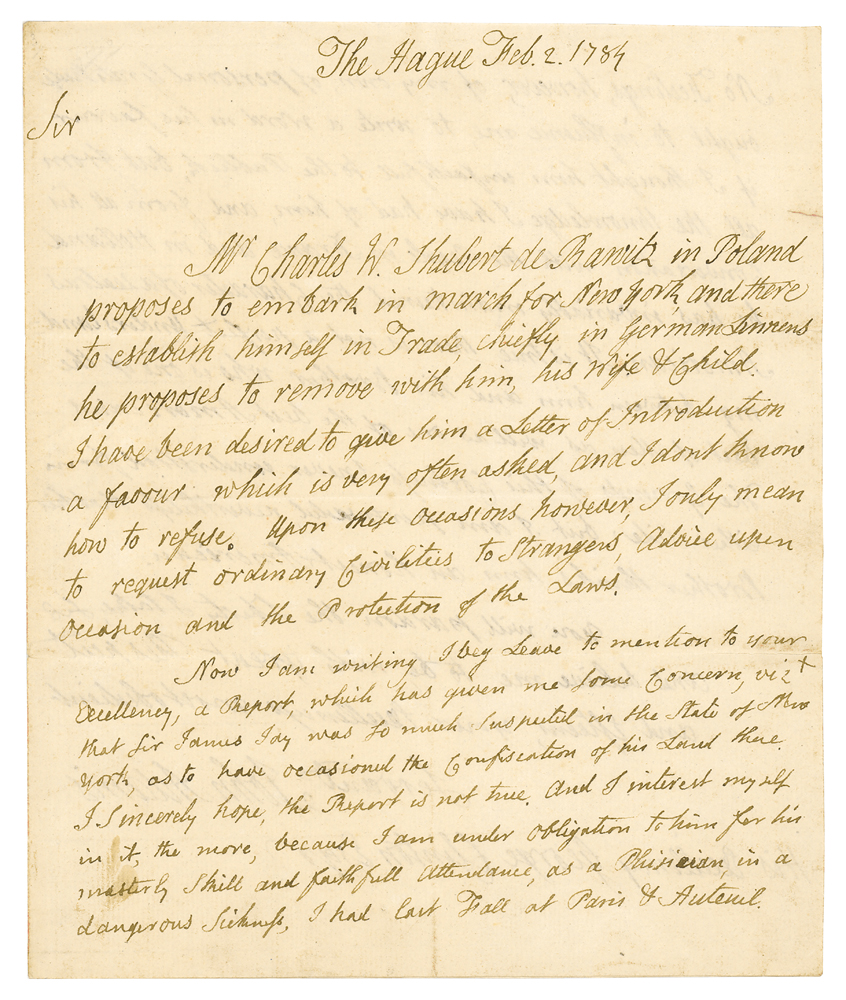 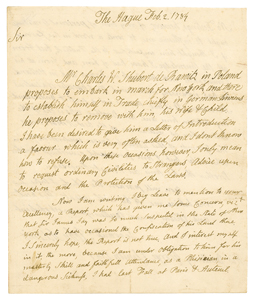 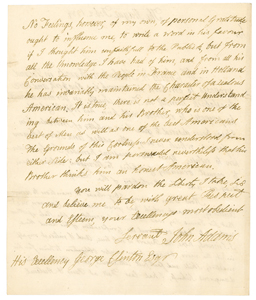 Significant ALS, one page both sides, 7.25 x 8.75, February 2, 1784. Letter written from The Hague while serving as first US Minister to the Netherlands, to Governor George Clinton of New York, in defense of James Jay, the brother of John Jay. In full: "Mr. Charles W. Shubert de Rawitz in Poland proposes to embark in March for New York, and there to establish himself in Trade, chiefly in German linens. He proposes to remove with him, his wife & child. I have been desired to give him a Letter of Introduction, a favour which is very often asked, and I don't know how to refuse. Upon these occasions however, I only mean to request ordinary civilities to strangers, advice upon occasion and the Protection of the Laws.

Now I am writing I beg leave to mention to your Excellency, a Report, which has given me some concern, viz that Sir James Jay was so much suspected in the state of New York, as to have occasioned the confiscation of his Land there. I sincerely hope, the Report is not true and I interest myself in it, the more, because I am under obligation to him for his masterly skill and faithful attendance, as a Physician, in a dangerous sickness, I had last Fall at Paris & Auteuil.

No Feelings, however, of my own, of personal gratitude ought to influence me, to write a word in his favour if I thought him unfaithful to the Publick, but from all the knowledge I have had of him, and from all his conversation with the People in France and in Holland he has invariably maintained the character of a zealous American. It is true, there is not a perfect understanding between him and his Brother, who is one of the best of Men as well as one of the best of Americans. The grounds of this coolness I never understood from either side: but I am persuaded nevertheless that his Brother thinks him an honest American." In fine condition.

Initially a supporter of American independence alongside his more famous brother, James Jay later changed his views and became a Loyalist hoping for reconciliation. In 1782, he purposely allowed himself to be captured by the British so that he could present a plan for peace. British commander Guy Carleton freed him and allowed him to go to England, where he lived in exile for two years. Although he had alienated his brother with his political views, by 1784, James Jay hoped to return to America and resume life as a doctor in New York. Called upon to intervene, John Adams performed admirably: writing to New York's governor, he testifies to Jay's skill as a physician and his renewed commitment to the American cause. When Governor Clinton replied—over a year later—he wrote: 'I am happy to have it in my Power to refute the unfavourable accounts you had received respecting Sir James Jay. It is true there were some unlucky Circumstances attending his Capture which were so represented as to have excited Jealousies and Suspicions in the minds of some rather Injurious to him; but they never made such Impression as to become matter of Public discus̃ion.' By then, Jay had already made his successful return to New York and had resumed his practice of medicine. A fantastic letter from John Adams, connecting his diplomatic skill to one of America's 'Founding Families.'