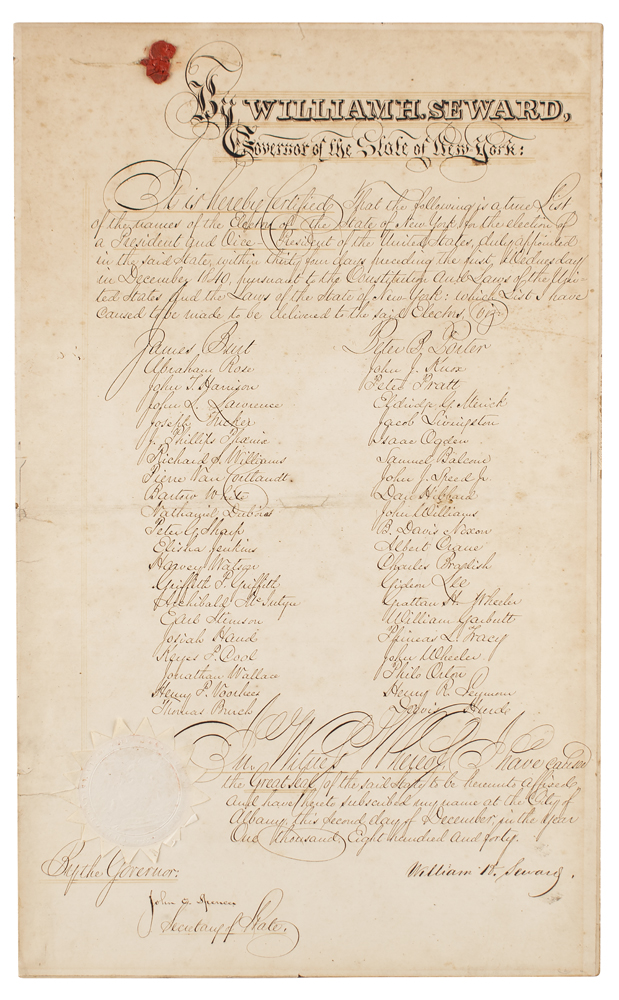 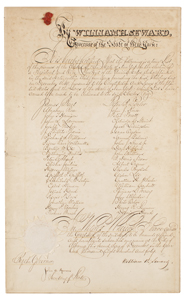 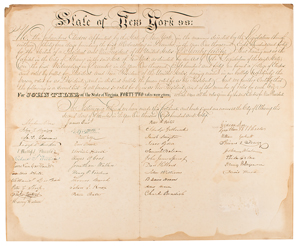 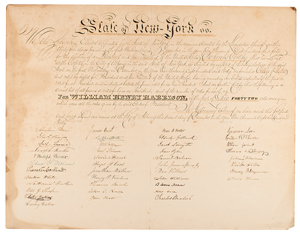 Three important electoral college documents certifying the votes of New York's electors for the William Henry Harrison-John Tyler ticket in the 1840 presidential election, all dated December 2, 1840. First is a 22.25 x 17.25 document signed by New York state's 42 electors—including Pierre Van Cortlandt Jr., Peter Buell Porter, John L. Lawrence, Elisha Jenkins, and Gideon Lee—in part: "We the Subscribers, Electors appointed by the State of New York, in the manner directed by the Legislature thereof…formed a College of Electors and voted by ballot for President and Vice President of the United States…And we further Certify that the following is a correct list of all persons so voted for by us as President, and of the number of votes for each, wiz: For William Henry Harrison, of the State of Ohio, Forty-Two votes were given which were all the votes given by said Electors for President."

Second is a similar document, measuring 21 x 17.25, signed by the same 42 electors, certifying that "the following is a correct list of all persons so voted for by us as Vice President, and of the number of votes for each, viz: For John Tyler, of the State of Virginia, Forty-Two votes were given."

Third is a document signed by William Seward as governor of New York, 10.75 x 17.75, certifying the list of the state's 42 electors as accurate, with the "Great Seal" of the State of New York applied to the lower left corner; countersigned by New York Secretary of State John C. Spencer. All three are affixed to same-side cardstock mounts. In very good to fine condition, with soiling and staining to all three documents.

As the incumbent Van Buren's home state, and the holder of the most electoral votes at 42, New York was a pivotal player in the 1840 election. Harrison took the state by three points, en route to a decisive victory—the Harrison-Tyler ticket collected 234 electoral votes while Van Buren earned a meager 60. The vice presidential pick proved to be as important as the presidential one, as Tyler took office upon Harrison's death just 31 days into his term. John Canfield Spencer, who here signs as New York's Secretary of State, would be promoted to Tyler's cabinet as Secretary of the Treasury in 1843; Governor Seward would go on to become Lincoln's Secretary of State. An intriguing and historically significant set of electoral documents.