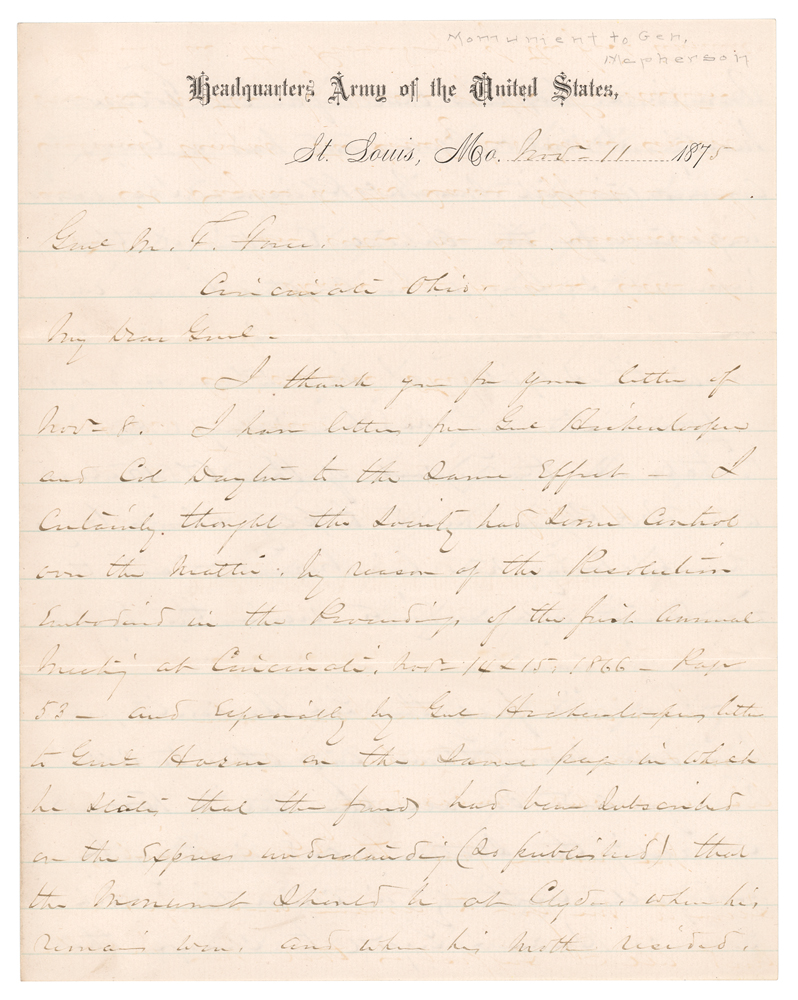 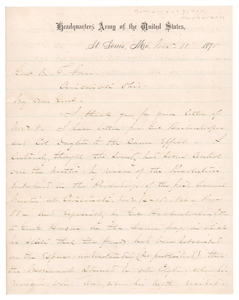 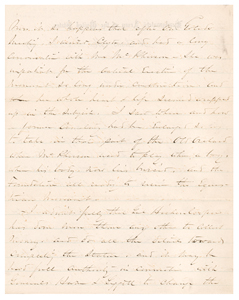 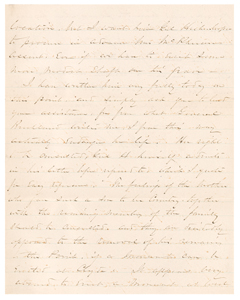 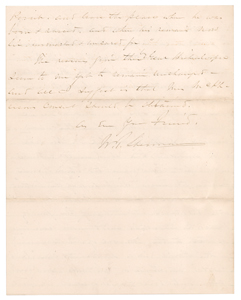 ALS signed “W. T. Sherman,” four pages on two adjoining sheets, 7.75 x 9.75, Headquarters Army of the United States letterhead, November 11, 1875. Letter to General Manning Ferguson Force, in part: "I thank you for your letter of Nov. 8. I have letters from Genl. Hickenlooper and Col. Dayton to the same effort. I certainly thought the society had some control over the matter by reason of the Resolution embodied in the Proceeding of the first annual meeting at Cincinnati, Nov. 14 & 15, 1866…and especially by Genl. Hickenlooper's letter to Genl. Horne…in which he states that the funds had been subscribed on the express understanding (so published) that the monument should be at Clyde, where his remains were and where his mother resided. Now it so happens that after our Toledo meeting I visited Clyde and had a long conversation with Mrs. McPherson. She was impatient for the actual erection of the monument so long under construction and her whole heart & life seemed wrapped up in the subject. I saw where and how a former cemetery had been enlarged so as to take in that part of the Old Orchard where McPherson used to play when a boy, where his body now lies buried, and the foundation all ready to receive the Equestrian Monument." In fine condition. Accompanied by a mailing envelope for another letter addressed by Grant to Force.

Grant, Force, Lewis Mulford Dayton, and Andrew Hickenlooper were all members of the Society of the Army of the Tennessee, with the latter two serving as club secretaries, and each of them instrumental in the erection of a monument dedicated to General James B. McPherson. Created by sculptor Louis Rebisso of Cincinnati, the nine-foot-high bronze statue was dedicated on July 22, 1881 at the McPherson Cemetery in Clyde, Ohio. The ceremony was attended by twenty thousand people, including President Rutherford B. Hayes and Civil War Generals Ulysses S. Grant and William T. Sherman. Five years earlier on October 18, 1876, on the 11th annual reunion of the Army of the Tennessee, an equestrian statue of the general had been installed in McPherson Square in Washington, D.C. by the Society of the Army of the Tennessee.