Rockne on his famed 1924 Notre Dame squad: "For real athletes you have to hand it to the old Four Horsemen team" 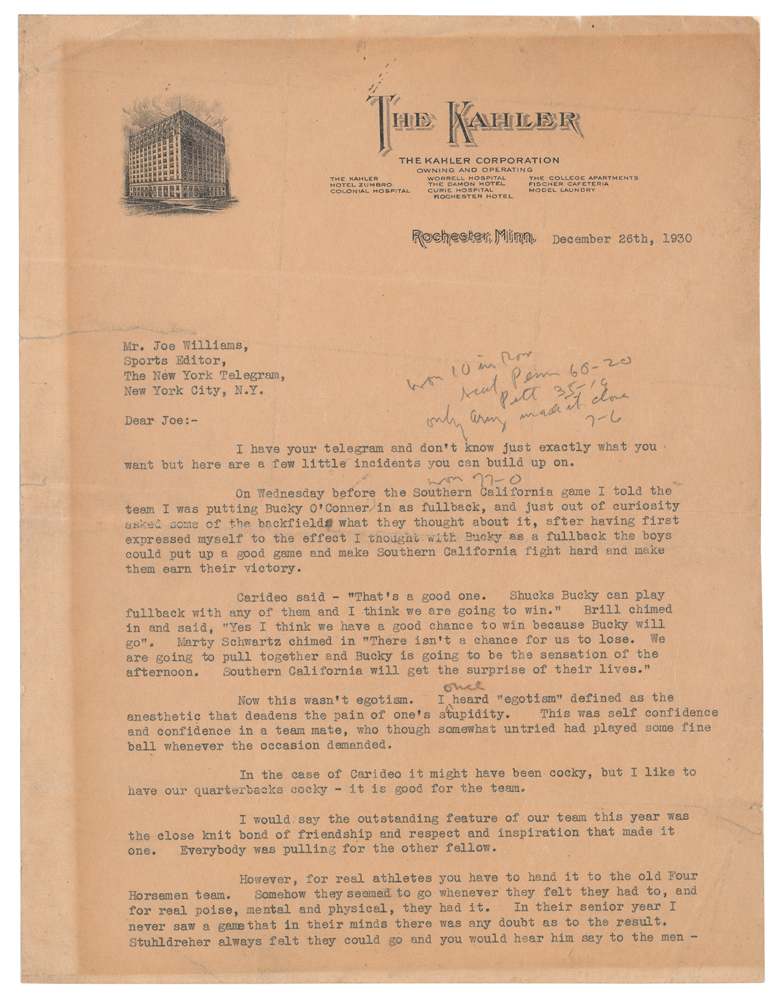 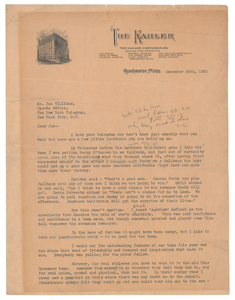 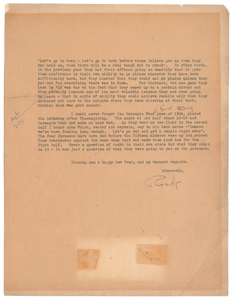 Rockne on his famed 1924 Notre Dame squad: "For real athletes you have to hand it to the old Four Horsemen team"

TLS signed “Rock,” two pages, 8.25 x 11, December 26, 1930, The Kahler letterhead. Letter to Joe Williams, the sports editor of the New York Telegram, in part: “I would say the outstanding feature of our team this year was the close knit bond of friendship and respect and inspiration that made it one. Everybody was pulling for the other fellow. However, for real athletes you have to hand it to the old Four Horsemen team. Somehow they seemed to go whenever they felt they had to, and for real poise, mental and physical, they had it. In their senior year I never saw a game that in their minds there was any doubt as to the result. Stuhldreher always felt they could go and you would hear him say to the men—'Let’s go to town—let’s go to town before these fellows get an idea they can hold us, then there will be a real tough nut to crack.’ In other words, in the previous year they had their offense going so smoothly that it gave them confidence in their own ability to go places whenever they bore down sufficiently hard, but they learned that they could not go places unless they put out for everything there was in them. For instance, the one game they lost in '23 was due to the fact that they eased up to a certain extent and they probably learned one of the most valuable lessons they are ever going to learn—that in spite of ability they could achieve results only when they enthused and rose to the heights where they were clicking at their best. Nothing else was good enough.

I shall never forget the Carnegie Tech game of 1924, final 40-19, played the Saturday after Thanksgiving. The score at the half stood 13-13 and Carnegie Tech had made us look bad. As they went on the field in the second half I heard Adam Walsh, center and captain, say to his team mates—'Come on we've been fooling long enough. Let’s go out and get a couple right away.’ The Four Horsemen bore down and before the fifteen minutes were up had scored four touchdowns against the same team that had made them look bad for the first half. Never a question of doubt in their own minds but what they could do it—it was just a question of when they were going to put on the pressure." Rockne adds a few handwritten lines to the text. In very good condition, with irregular toning, corner creasing, and a tear to each page, repaired and reinforced by complete silking to the reverse. A fantastic football letter from the famed Fighting Irish coach, in which he discusses his present-day team and reminisces about his vaunted Four Horsemen backfield, a group that carried Notre Dame to the national championship just six years earlier.