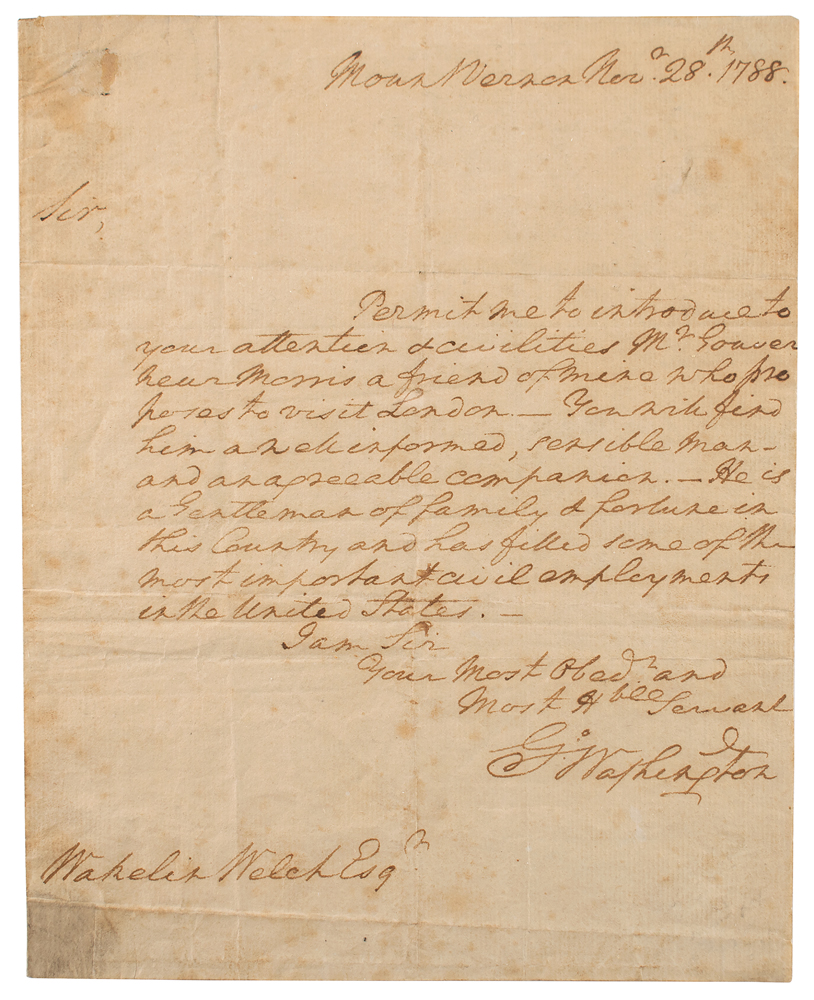 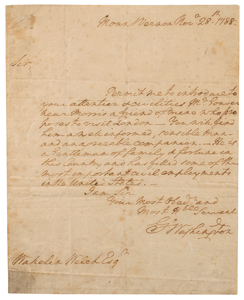 Beautifully penned ALS signed “Go: Washington,” one page, 7.25 x 9, November 28, 1788. Written from Mont Vernon, a letter to Wakelin Welch, in full: "Permit me to introduce to your attention & civilities M'r Gouverneur Morris a friend of mine who proposes to visit London. You will find him a well informed, sensible man, and an agreeable companion. He is a Gentleman of family & fortune in this Country and has filled some of the most important civil employment in the United States. I am Sir, Your Most Obed't and Most H'ble Servant." In very good to fine condition, with multiple folds, scattered light foxing, and an old repair to the bottom of the hinge. An outstanding handwritten letter from Washington penned roughly two weeks before the first quadrennial presidential election—magnificent in both presentation and association, the letter’s clean crisp penmanship is perhaps only overshadowed by its eloquent recommendation of a fellow founding father.

To ensure the success of Morris’s international venture, Washington, on November 28, 1788, penned letters to some of Europe’s most influential figures: he wrote to Thomas Jefferson, then the Minister to France; the Marquis de Lafayette; his friend, Irish politician Sir Edward Newenham; the Comte de Rochambeau, the commander-in-chief of the French Expeditionary Force sent by France in order to help the American Continental Army fight against British forces; Francois-Jean de Chastellux, the principal liaison officer between the French commander in chief and Washington during the war; and Arthur Young of England, one of the first experts to publish widely on English farming practices and encourage experimentation in agriculture.

Gouvernour Morris, by 1788, had already forged for himself a robust career defined by both his talents as a lawyer and his sagacity as a statesman. A signatory to the Articles of Confederation and the United States Constitution, for which he wrote the latter’s iconic preamble, Morris likewise served as a key delegate at the Continental Congress in 1778, when his decisive tie-breaking vote fractured the Conway Cabal’s attempt to remove George Washington as Commander-in-Chief of the Continental Army. He aligned himself further with Washington when, as a Pennsylvania delegate to the Constitutional Convention in 1787, he debated in favor of a strong centralized government.

As a business agent for Robert Morris and William Constable, he left for Europe, where, in pursuit of business, diplomatic duties and recreational travel, he remained for nearly a decade. Arriving in Paris in February 1789, Morris witnessed the start of the French Revolution and, with the departure of Thomas Jefferson later that year, became the most influential American in the city. In June 1792, President Washington named Morris as the Minister Plenipotentiary to France at the onset of the Reign of Terror. Morris’s diaries during that time have become a valuable chronicle of the French Revolution, capturing much of the turbulence and violence of that era.

Wakelyn Welch was a London-based merchant and the business partner of Robert Cary, the head of the large mercantile house Robert Cary & Company to which Washington, as a determined Virginia tobacco planter, shipped his crops overseas to sell throughout the 1760s and part of the 1770s. During the Revolutionary War, two of the partners of the firm, Cary and John Moory, died, which left Welch as the sole surviving partner. Although Washington ceased listing items imported by Cary in his plantation ledgers by 1773, research shows that Washington and Welch continued a regular correspondence.