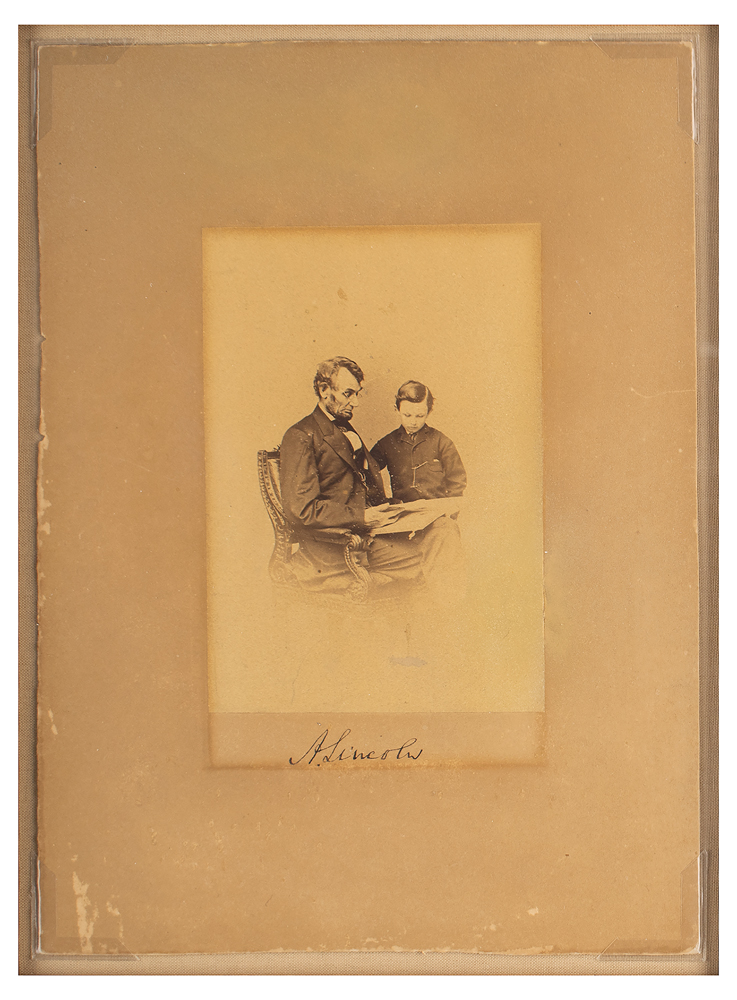 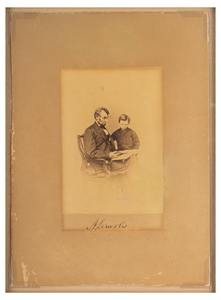 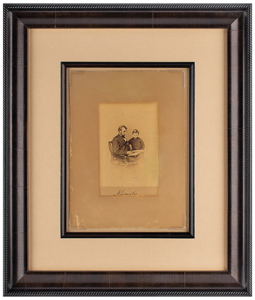 Original albumen 3.75" x 5.25" photograph of President Abraham Lincoln with his son Tad, taken by Mathew Brady on February 9, 1864, on its original 7.375" x 10" mount, beautifully signed on the mount in ink, “A. Lincoln.” Archivally mounted, cloth-matted, and framed behind UV-protective acrylic to an overall size of 15.75" x 18.25". In very good to fine condition, with museum-quality conservation to an area far away from the image, and not affecting the bold signature; the repair is virtually indiscernible and leaves this photo in superb appearance. Accompanied by a full letter of authenticity and grading from PSA/DNA, evaluating the autograph as a "9."

This intimate and poignant image of father and son is one of the most popular of President Abraham Lincoln. This rare, large-format signed copy of a timeless image is simply one of the finest Lincoln photographs in existence.

This exceptionally large example, unlike the more common cartes-de-visite (2.5" x 4", one of which recently fetched over $90,000), is one of only three known specimens of this particular size and pose. Of the other two, one is in an institution, and the other sold for $325,000 in 2002 as part of the Forbes Collection.

Inscription on the Verso (photographed prior to framing):
"This autograph is genuine. It was procured by me at the White House in June 1864.
F. W. Pitcher."

Historical Background
On February 9, 1864, portrait painter Francis B. Carpenter arranged for President Lincoln to sit for a series of photographs at Matthew Brady’s Washington D.C. gallery. Carpenter, the President, and Lincoln’s youngest son Tad walked to Brady’s studio at 3 p.m.

Since Brady’s eyesight was beginning to fail, he asked his superintendent, Anthony Berger, to photograph Lincoln. Berger took at least seven poses of the President, both alone and with ten-year-old Tad. The images taken that day have formed the basis for Lincoln’s image on the penny and both the old and new $5 bills.

In this image, Lincoln holds “a big photograph album which the photographer, posing the father and son, had hit upon as a good device to use in this way to bring the two sitters together.” Lincoln later feared that the public would view this pose as “a species of false pretense” because most viewers would assume the book was a large clasped Bible. When they learned that it was a photograph album, they might think Lincoln was “making believe read the Bible to Tad.” Just as Lincoln feared, after his death some versions were carefully retouched in order to make the album appear to be a large Bible.

This image became the most popular of the President and his youngest son, and it was frequently reproduced in various sizes by Brady and copied by unauthorized photographers. In 1865, Berger copyrighted a version he produced in India ink that made at least two changes. He added background and changed the chair to make it appear that the setting was the White House, and he changed the volume to make it look like a Bible printed in double columns. Harper’s Weekly used Anthony’s revised image as the basis for its May 6, 1865 cover to memorialize the assassinated President. The image was also copied by many artists and lithographers, both authorized and unauthorized. In 1984, the United States Postal Service issued this image on a stamp with the ironic caption, “A Nation of Readers,” to promote literacy.

Berger went on to photograph Lincoln again, this time at the White House, on April 26. Artist Francis B. Carpenter wanted photographs of Lincoln posed exactly where Lincoln had read the preliminary emancipation proclamation to his Cabinet—by the table in his office, so Berger took at least two photographs, one of Lincoln seated at the end of the table, and another of him standing. They are the only photographs of Lincoln in the White House. Berger also made photographs of Cabinet members in specific poses. Carpenter used these images for his monumental oil painting The First Reading of the Emancipation Proclamation of President Lincoln, which now hangs in the U.S. Capitol.


Thomas “Tad” Lincoln (1853-1871) was the fourth son of Abraham and Mary Lincoln. At the time of his birth, the Lincolns had already lost their second-born son, Edward, in 1850. The family mourned third-born son, Willie, in 1862. “Tad,” nicknamed by his father because he had a large head on a small body and wriggled like a tadpole, largely had free rein of the White House. He did not attend school and was the bane of many tutors. After Lincoln’s assassination, he, eldest son Robert T. Lincoln (1843-1926), and Mary Lincoln (1818-1882) lived in Chicago, until 1868. Mary and Tad lived in Europe for the next three years. Tad, known for his devotion to his mother, died of heart failure in Chicago at the age of 18.

Anton/Anthony Berger (1832-after 1897) was born in Frankfurt, Germany and studied art at the Städelsches Kunstinstitut art museum and art school in Frankfurt. He immigrated to the United States in 1854 and filed a declaration of intent to become an American citizen in December 1854 in New York. By 1855, he was working for Matthew Brady, preparing oil paintings from photographs for wealthy clients. In May 1861, he became a naturalized U.S. citizen. By 1863, he was the manager of Matthew Brady’s Washington, D.C. studio. A few days after the Battle of Gettysburg, Berger traveled with fellow Brady employee David Woodbury to take photographs of the battlefield and returned in November to take photographs of the cemetery dedication, when Lincoln delivered the Gettysburg Address. He returned to Brooklyn after the war and worked as an artist and photographer. In 1897, he lived in New York City and received a U.S. passport. He declared his intention to return with his wife to the United States after a visit to Europe. In 1900, his “celebrated oil painting of Abraham Lincoln” exhibited in the Frankfurt Art gallery was transferred to the U.S. consulate in Berlin.

Franklin Wayland Pitcher(1833-1923) was born near Bangor, Maine, and attended Maine Wesleyan Seminary. After working as a bookkeeper and clerk in Boston and in Maine, he went to Cuba for a year as the representative of a Maine lumber shipping firm. In 1860, he was a merchant living in Bangor, Maine. His younger brother Major William L. Pitcher of the 4th Maine Volunteer Infantry had been killed at the Battle of Fredericksburg in December 1862. In May 1863, Franklin W. Pitcher married Sarah March (1838-1865), but she died two and a half years later. In 1867, he married Mary Frances Stevens (1843-1923), with whom he had four children. Pitcher founded a ship supply and commission business in Boston, which lasted for five years, before he became the Boston representative of Newfoundland lumber interests and continued in the lumber business until 1875. That year, he went to Wisconsin and began his own lumber business. He returned to Boston in 1882 and became involved in the rubber manufacturing industry, in which he became nationally known. In 1882, Pitcher was an incorporator of the Minneapolis Rubber Company. He served as the treasurer and later the president of the Revere Rubber Company of Chelsea, Massachusetts. In 1891, he became the treasurer of the Easthampton Rubber Thread Company, and later became its general manager, a position he held until his death.