"This fratricide war not only opens coffers which never oped before but hearts as well,—dark shadows lie upon the hearthstones, but if, in contrast, the fading embers of humanity and brotherly love glow with a new radiance, it shall not at last, have been all in vain" 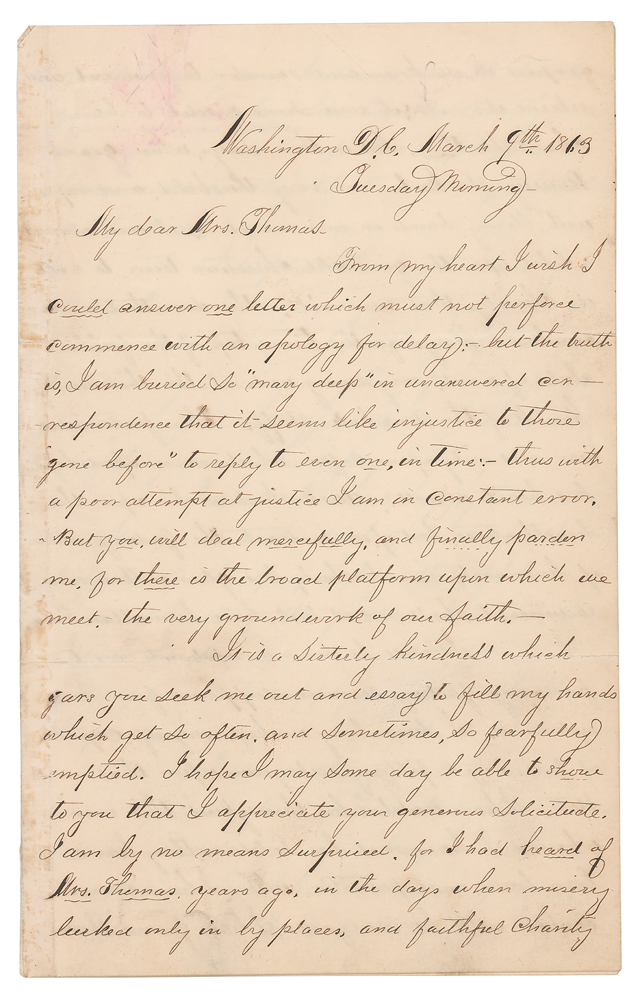 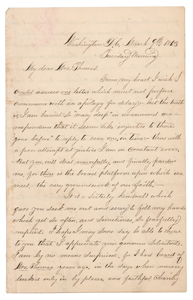 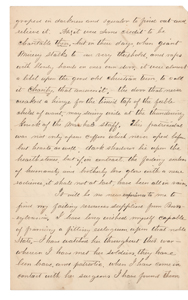 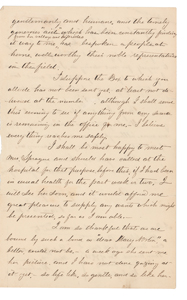 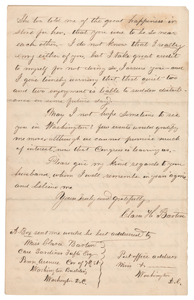 "This fratricide war not only opens coffers which never oped before but hearts as well,—dark shadows lie upon the hearthstones, but if, in contrast, the fading embers of humanity and brotherly love glow with a new radiance, it shall not at last, have been all in vain"

Civil War-dated ALS signed “Clara H. Barton,” four pages on two adjoining sheets, 5 x 8, March 9, 1863. A lengthy, poetical, and neatly penned letter written from Washington, D.C., addressed to a Pennsylvania woman, in part: “From my heart I wish I could answer one letter which must not perforce commence with an apology for delay:—but the truth is I am buried ‘so many’ deep in unanswered correspondence that it seems like injustice to those ‘gone before’ to reply to even one, in time:—thus with a poor attempt at justice I am in constant error. But you will deal mercifully, and finally pardon me, for there is the broad platform upon which we meet, the very groundwork of our faith.

It is a sisterly kindness which [bids] you seek me out and essay to fill my hands which get so often, and sometimes, so fearfully emptied. I hope I may some day be able to show to you that I appreciate your generous solicitude. I am by no means surprised, for I had heard of Mrs. Thomas years ago, in the days when misery lurked only in by places, and faithful charity groped in darkness and squalor to find out and relieve it. Ah, it were some credit to be charitable then, but in these days, when giant misery stalks to our very threshold, and raps with bloody hands on ones own door, it were almost a libel upon the good old Christian term, to call it charity, that answers it,—the door that never creaked a hinge for the timid tap of the feeble child of want, may swing wide at the thundering knock of the Marshal's staff. This fratricide war not only opens coffers which never oped before but hearts as well,—dark shadows lie upon the hearthstones, but if, in contrast, the fading embers of humanity and brotherly love glow with a new radiance, it shall not at last, have been all in vain.

It will be no new experience to me to find my failing resources supplied from Pennsylvania. I have long wished myself capable of framing a fitting eulogium upon that noble state,—I have watched her throughout this war—wherever I have met her soldiers they have been brave, and patriotic When I have come in contact with her surgeons I have found them gentlemanly and humane, and the timely generous ‘aid’ which has been constantly finding its way to me from her valleys and hillsides has bespoken a people at home well worthy their noble representatives in the field.

I suppose the Box to which you allude has not been sent yet, at least not delivered at teh number, although I shall send this evening to see if anything from any service is remaining in the office for me.—I believe every thing reaches me safely.” Barton incorporates her signature into a postscript: “A box sent me would be best addressed to / Miss Clara Barton, care Gardiner Tufts Esq., Penn. Avenue Cor. of 7th St., Washington Building, Washington, D.C.” In very good to fine condition, with partially-repaired nearly-complete separation along the hinge.