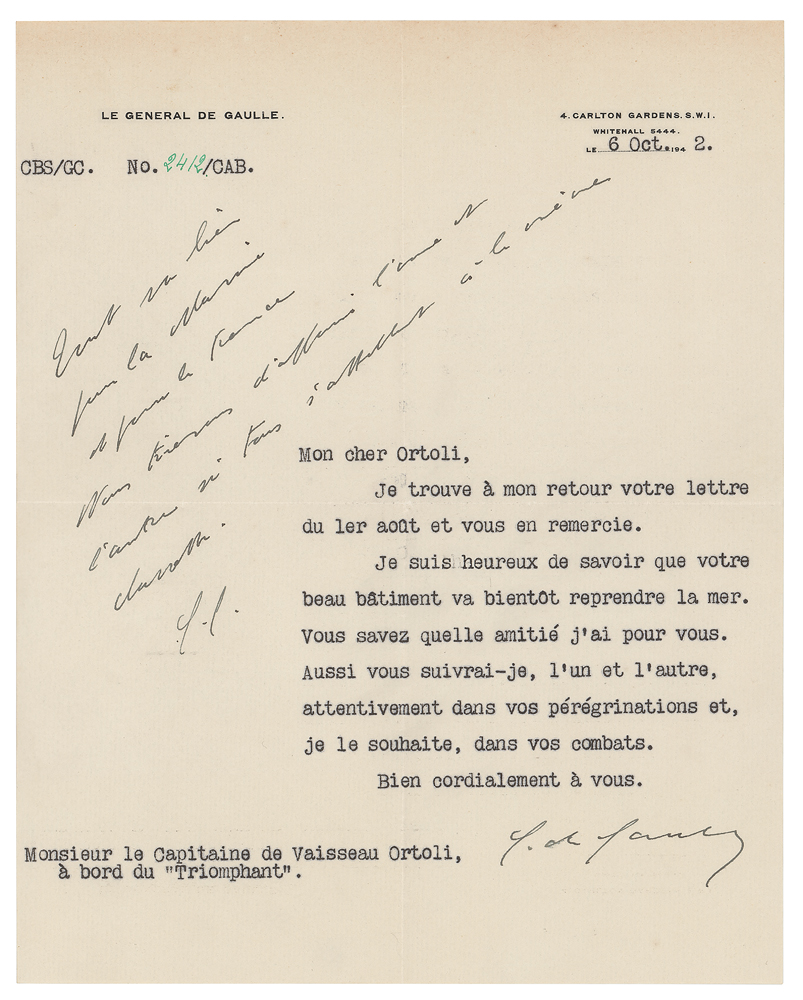 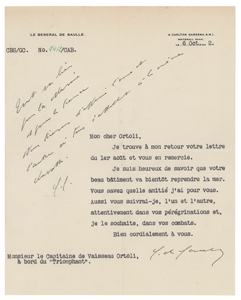 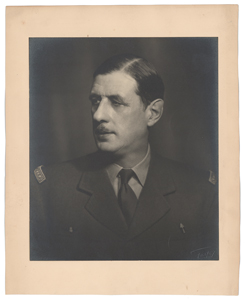 World War II-dated TLS in French, signed "C. De Gaulle," one page, 8 x 10, personal letterhead, October 6, 1942. Letter to Captain Vaisseau Ortoli on board the Triumphant, in part (translated): "Your beautiful building will soon resume the sea. You know what friendship I have for you. So you follow I, one and the other, carefully in your travels, and I hope, in your battles." In the upper left, de Gaulle adds a handwritten postscript which reads, (translated): "All is well for the Navy and for France. We will take the case of one or the other if all are striving to the same cart. C. G." In fine condition, with central horizontal and vertical folds. Accompanied by a handsome matte-finish 9.5 x 11.25 photo of de Gaulle by the Fayer Studio, which is signed in the lower right in white pencil, "Fayer." The photo is affixed to the original studio mount, which bears a "Fayer, Camera Portraits" stamp on the reverse.

As the world divided into the Axis and Allied forces of World War II, Charles de Gaulle's primary focus was on reinstating the French nation in resistance of the occupation; disputing the legitimacy of Philippe Petain's reign of the newly formed Vichy regime, which had signed an armistice with Nazi Germany, he relocated to London and organized the Free French forces as the government-in-exile. Despite his brash and haughty attitude, which most leaders found unbearable, de Gaulle gained the support of Churchill and, eventually, most of the other Allies. Continuing to build support for his cause, he sent Captain Paul Ortoli, who had been the head of his personal staff for the past year, to Australia-strong supporters of the Allied forces, and strong defenders of the British Empire-on board the Triumphant. With heartfelt wishes for success and the bold declaration that "All is well for the Navy and for France," this is an excellent war-dated letter from the controversial French naval commander.