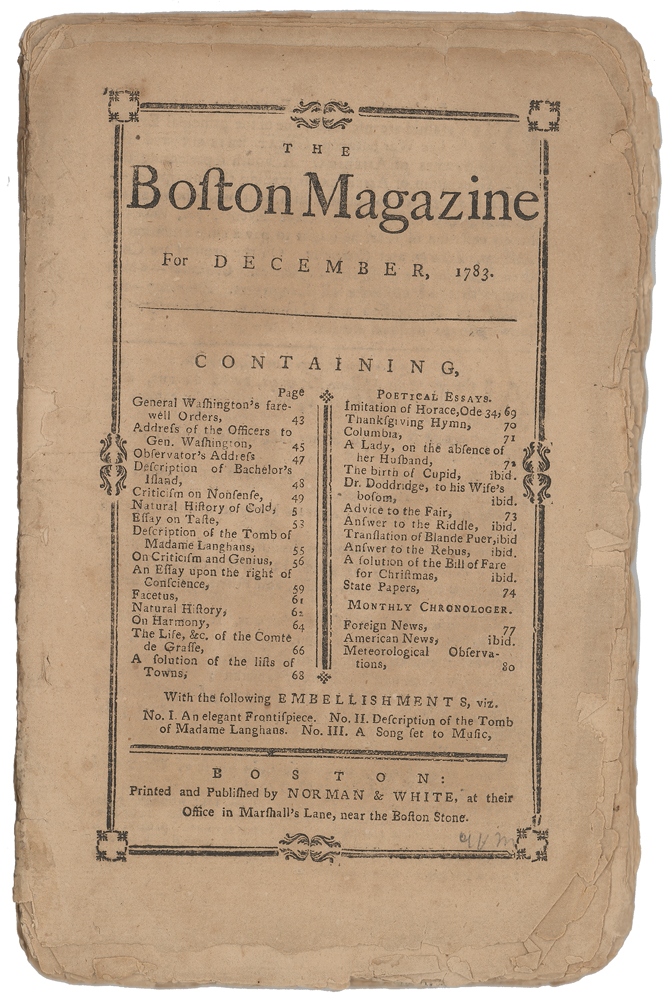 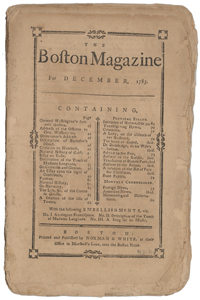 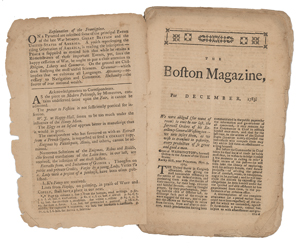 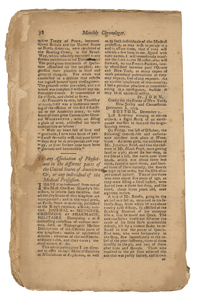 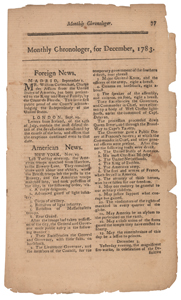 Issue of The Boston Magazine from December 1783, 5.5 x 8.75, 37 pages, containing "General Washington's farewell Orders to the Armies of the United States" and the "Address of the Officers to Gen. Washington." Issued at Rocky-Hill, near Princeton, on November 2, 1783, Washington's farewell orders praised the unselfishness and discipline of his troops during the Revolutionary War: "Every American Officer and Soldier must now console himself for any unpleasant circumstances which may have occurred, by a recollection of the uncommon scenes in which he has been called to act, no inglorious part; and the astonishing Events of which he has been a witness—Events which have seldom, if ever before, taken place on the stage of human action, nor can they probably ever happen again. For who has before seen a disciplined army formed at once from such raw materials? Who that was not a witness could imagine, that the most violent local prejudices would cease so soon, and that men who came from the different parts of the continent, strongly disposed by the habits of education, to despise and quarrel with each other, would instantly become but one patriotic band of brothers? Or who that was not on the spot can trace the steps by which such a wonderful revolution has been effected, and such a glorious period put to all our warlike toils?"

The "Monthly Chronology" at the back of the booklet also makes note of a military parade in New York, and quotes General Washington's farewell address at Fraunces Tavern: "At Frances's [sic] tavern, last Thursday at noon, there was a numerous meeting of the officers of the first distinction in the American army, to take leave of their great Commander George Washington; who, on filling a glass of wine, addressed his brave compatriots as follows: With an heart full of love and gratitude, I now take leave of you: I most devoutly wish that your latter days may be as prosperous and happy, as your former ones have been glorious and honourable." In very good condition, with staining, edge chipping, and damage to the spine.