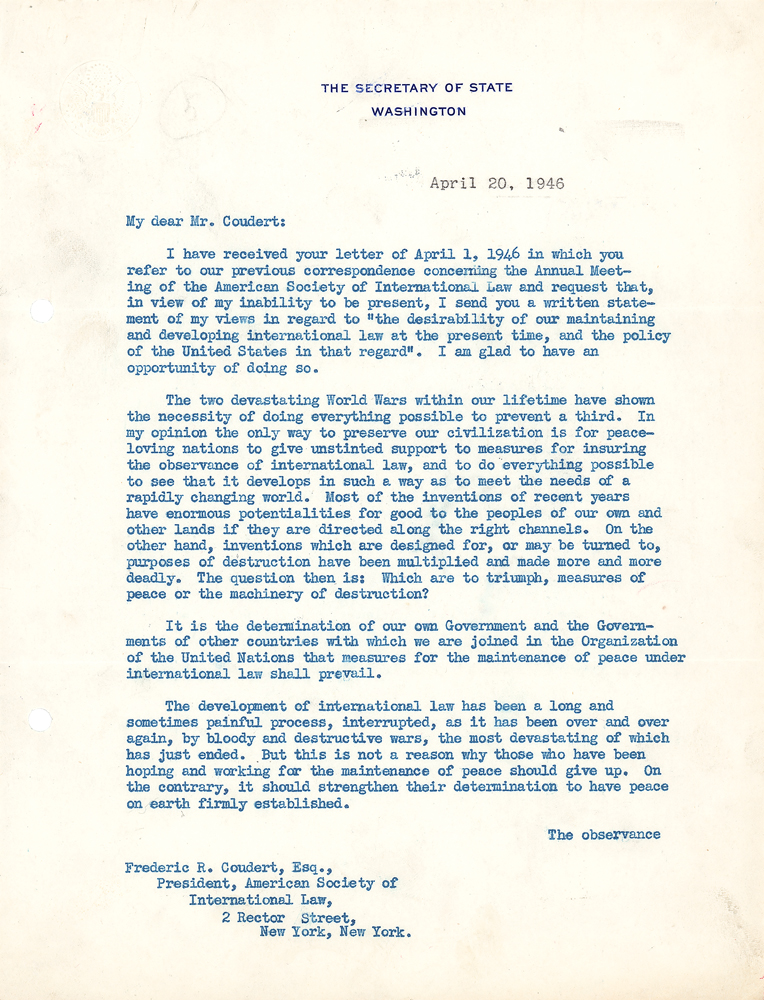 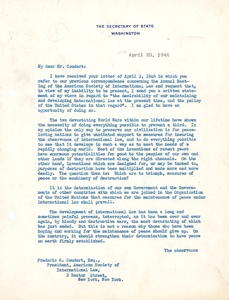 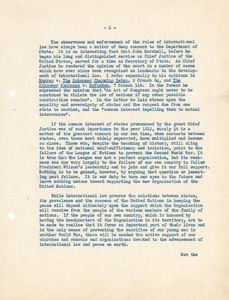 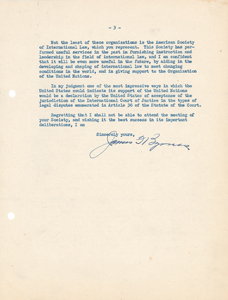 American judge and politician from South Carolina (1882-1972) who served the state as a congressman, senator, and as its 104th governor; additionally, he also served as a Supreme Court Justice and later as Secretary of State, making him one of the very few politicians to have served in the highest levels of all three branches of the American federal government while also being active in state government. TLS as secretary of state, three pages, 8 x 10.5, Secretary of State letterhead, April 20, 1946. Lengthy and fascinating letter to Frederic R. Coudert, the president of the American Society of International Law, in full: "I have received your letter of April 1, 1946 in which you refer to our previous correspondence concerning the annual meeting of the American Society of International Law and request that, in view of my inability to be present, I send you a written statement of my views in regard to ‘the desirability of our maintaining and developing international law at the present time, and the policy of the United States in that regard.’ I am glad to have an opportunity of doing so.

The two devastating World Wars within our lifetime have shown the necessity of doing everything possible to prevent a third. In my opinion the only way to preserve our civilization is for peace loving nations to give unstinted support to measures for insuring the observance of international law, and to do everything possible to see that it develops in such a way as to meet the needs of a rapidly changing world. Most of the inventions of recent years have enormous potentialities for good to the peoples of our own and other lands if they are directed along the right channels. On the other hand, inventions which are designed for, or may be turned to, purposes of destruction have been multiplied and made more and more deadly. The question then is: Which are to triumph, measures of peace or the machinery of destruction?

It is the determination of our own Government and the Governments of other countries with which we are joined in the Organization of the United Nations that measures for the maintenance of peace under international law shall prevail.

The development of international law has been a long and sometimes painful process, interrupted, as it has been over and over again, by bloody and destructive wars, the most devastating of which has just ended. But this is not a reason why those who have been hoping and working for the maintenance of peace should give up. On the contrary, it should strengthen their determination to peace on earth firmly established.

The observance and enforcement of the rules of international law have always been a matter of deep concern to the Department of State. It is an interesting fact that John Marshall, before he began his long and distinguished service as Chief Justice of the United States, served for a time as Secretary of State. As Chief Justice he rendered the opinion of the court in a number of cases which have ever since been recognized as landmarks in the development of international law. I refer especially to his opinions in Murray v Schooner Charming Betsy, 2 Cranch 64, and The Schooner Exchange v McFaddon, 7 Cranch 116. In the former he expressed the opinion that ‘An Act of Congress ought never to be construed to violate the law of nations if any other construction remains.’ In the latter he laid stress upon the equality and sovereignty of states and the respect due from one state to another, and the ‘common interest impelling them to mutual intercourse.’

If the common interest of states pronounced by the great Chief Justice was of such importance in the year 1812, surely it is a matter of the greatest concern in our own time when contacts between states, even those most widely separated, have multiplied and become so close. Those who, despite the teaching of history, still cling to the idea national self-sufficiency and isolation, point to the failure of the League of Nations to prevent the Second World War. It is true that the League was not a perfect organization, but its weakness was due very largely to the failure of our own country to follow President Wilson's leadership and to join and give it our full support. Nothing is to be gained, however, by arguing that question or lamenting past failure. It is our duty to turn our eyes to the future and leave nothing undone toward supporting the Organization of the United Nations.

While international law governs the relations between states, its prevalence and the success of the United Nations in keeping the peace will depend ultimately upon the support which the Organization will receive from the people of the various members of the family of nations. If the people of our own country, which is honored by having the headquarters of the Organization in its territory, are to be made to realize that it forms an important part of their lives and is the only means of preventing the sacrifice of our young men in another World War, there will be needed the active support of our churches and schools and organizations devoted to the advancement of international law and peace on earth.

Not the least of these organizations is the American Society of International Law, which you represent. This Society has performed useful in the past in furnishing instruction and leadership in the field of international law, and I am confident that it will be even more useful in the future, by aiding in the developing and shaping of international law to meet changing conditions in the world, and in giving support to the Organization of the United Nations.

In my judgment one of the most impressive ways in which the United States could indicate its support of the United Nations would be a declaration by the United States of acceptance of the jurisdiction of the International Court of Justice in the types of legal disputes enumerated in Article 36 of the Statute of the Court.

Regretting that I shall not be able to attend the meeting of your Society, and wishing it the best success in its important deliberations.” In fine condition.