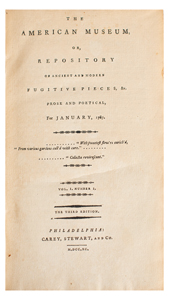 Highly desirable complete run of The American Museum in twelve leatherbound volumes, originally published in Philadelphia by Mathew Carey from January 1787-December 1792. These volumes contain mixed editions, with third editions of Volume 1, No. 1-3 (January-March 1787); second editions of Vol. I, No. 4-6 (April-June 1787), Vol. 2, No. 1-6 (July-December 1787), and Vol. 3, No. 1-6 (January-June 1788); and first editions of the rest (Vol. 4-Vol. 12). The fold-out plates (e.g. the map of the Gulf Stream and Plan of African Ship's Lower Deck) are absent. Also includes Carey's The American Museum for the Year 1798; or Annual Register of Fugitive Pieces, Native and Modern, in a matching binding. In overall good to very good condition, with heavy wear to spines, partially missing spine labels, flaking to leather, cracked joints, and staining and toning to textblocks.

Published by Mathew Carey in Philadelphia, the American Museum was one of the first successful literary magazines in the United States: it published poetry, political columns, and news on affairs international and domestic. Included on the subscriber lists published herein are names like Benjamin Franklin, Thomas Jefferson, James Madison, and George Washington, all of whom were also contributors. The September 1787 magazine (represented here as a second edition), included the first periodical printing of the United States Constitution. Early printings of the Federalist Papers were published in the American Museum, and in it reported the proceedings of the first Congress, along with the debates over the adoption of the Bill of Rights in 1789.