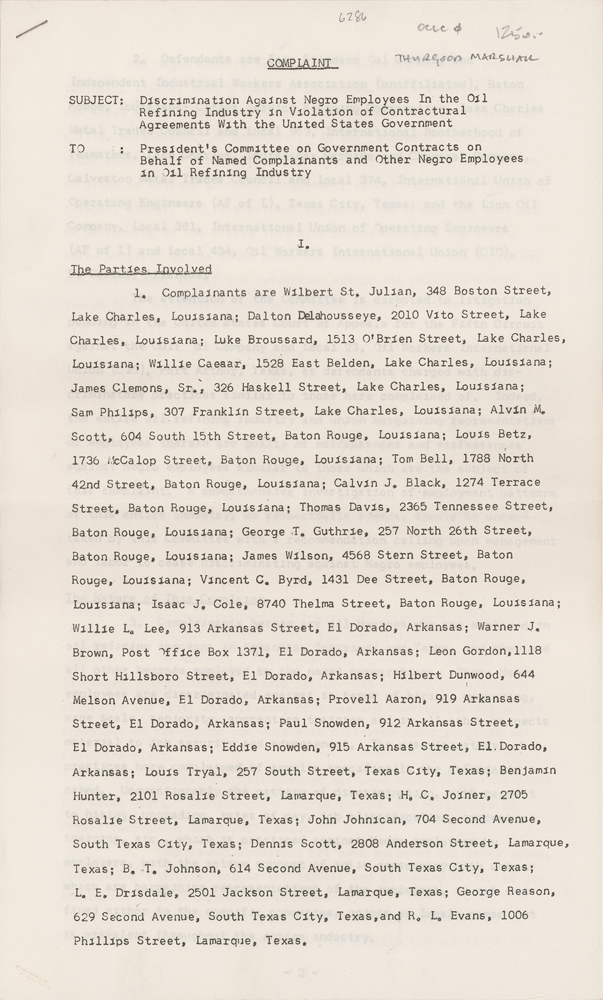 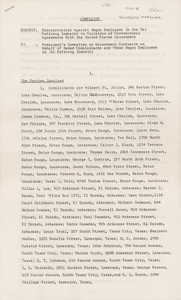 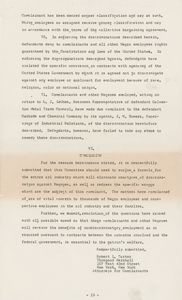 Important Civil Rights legal complaint submitted by Thurgood Marshall and Robert Lee Carter, 19 mimeographed pages, 8.5 x 14, New York, [1955]. Complaint on the subject of "Discrimination Against Negro Employees In the Oil Refining Industry in Violation of Contractual Agreements With the United States Government," submitted to the "President's Committee on Government Contracts." Representing 31 African-American oil workers from Louisiana, Arkansas, and Texas, Marshall and Carter charge that Esso, Cities Service, and several trade unions have engaged in a "pattern of discrimination, with respect to hiring, upgrading, rates of pay, job classification, apprentice training, etc….against Negro employees." They point out that "all Negro workers are hired as 'laborers' without regard to training, skill, work history or potential, and all white workers are hired at some higher classification." Furthermore, "Negro workers can never obtain the necessary experience or training in grade to advance." The complaint goes on to describe the experiences and work histories of the 31 complainants, and concludes with a request that the Committee "seek to evolve a formula for the entire oil industry which will eliminate practices of discrimination against Negroes." In fine condition, with the last page detached and toned at center.

This important case found both Marshall and Carter in the middle of important legal careers: Marshall, serving as chief counsel for the NAACP, had won the landmark Brown v. Board of Education case a year earlier; Carter, his legal assistant and successor as NAACP chief counsel, had presented part of the oral argument in Brown v. Board to the Supreme Court

This complaint is discussed in 'Hotspots in a Cold War: The NAACP's Postwar Workplace Constitutionalism, 1948-1964' by Sophia Z. Lee: 'In April 1955 Carter, with Thurgood Marshall’s co-signature, filed a complaint with the PCGC, arguing that multiple oil companies and unions had not only violated the terms of their collective bargaining and government contracts, but had also 'deprived complainants and all other Negroes employed of rights and privileges guaranteed to them by the Constitution and laws of the United States.' The complainants sought changes in the five named companies, but also urged that “[a] comprehensive investigation of employment patterns of this entire industry…should be undertaken by this Committee.” Then, in June, the NAACP filed an additional eight NLRB complaints on behalf of thirty-one workers at Louisiana, Texas, and Arkansas refineries. The complaints accused employers as well as unions and asserted black workers’ constitutional rights. In the oil industry, the NAACP used administrative law and agencies to make its most concerted constitutional attack on workplace discrimination.'