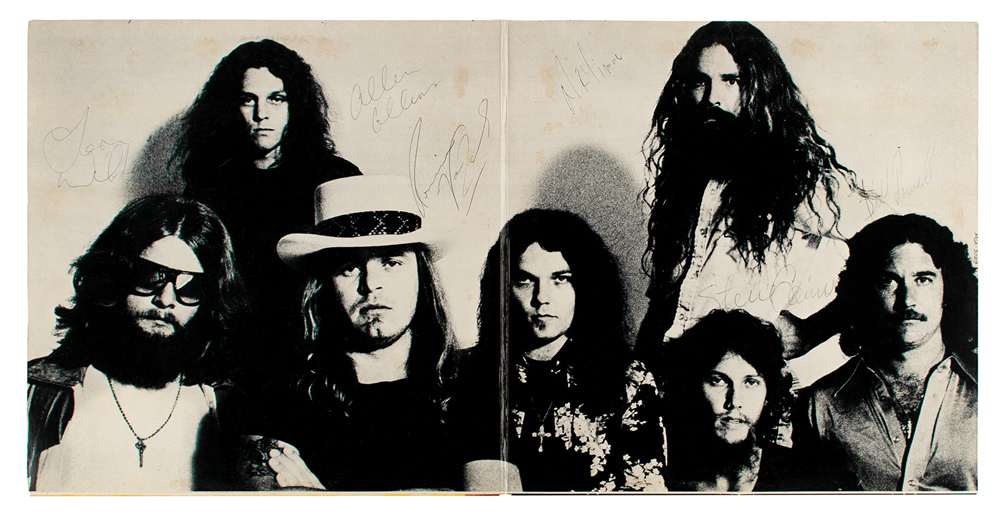 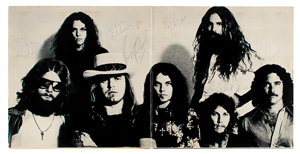 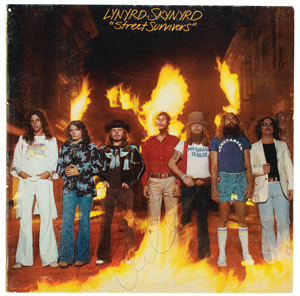 Rare and desirable Street Survivors album signed on the inner gatefold in ballpoint by all seven pictured members: "Ronnie Van Zant," "Steve Gaines," "Allen Collins," "Gary Rossington," "Bill Powell," "Leon Wilkeson," and "Artimus [Pyle].” The front cover bears an enormous second signature of Collins, nearly 10" in length. In fine condition, with some scattered light stains to the gatefold, and light scuffing and some trivial surface loss to the back cover and ends of the spine. The vinyl is not included.

This album was obtained at a signing at the Altamonte Springs Mall in Altamonte Springs, Florida, on its release day, October 17, 1977, and just three days before Lynyrd Skynyrd’s ill-fated flight bound for Baton Rouge, Louisiana. The resulting crash took the lives of Ronnie Van Zant, Steve and Cassie Gaines, assistant road manager Dean Kilpatrick, and pilots Walter McCreary and William Gray. Collins, Powell, and Wilkeson are since deceased, leaving Rossington and Pyle as the band’s only surviving original members.

With only a three day window between the date of its release and the date of the tragic plane crash, fully signed Street Survivor albums are few and far between. This beautiful, highly displayable example is only the second we have ever offered, and it will likely be years before we see another.