First edition of The Vegetable, signed on the play's opening night by F. Scott Fitzgerald and its leading man 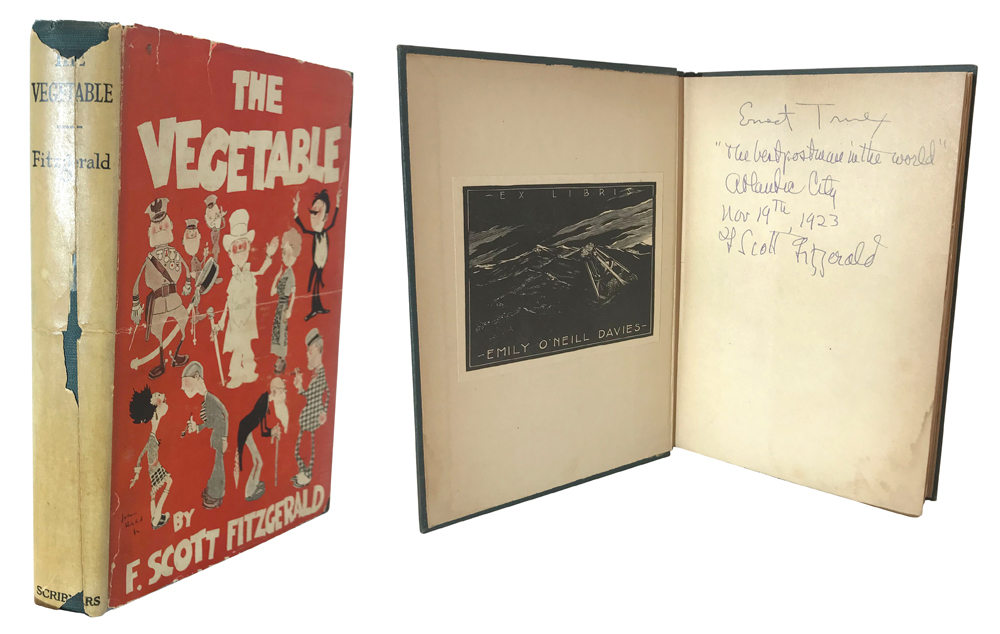 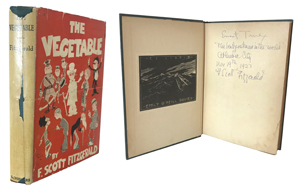 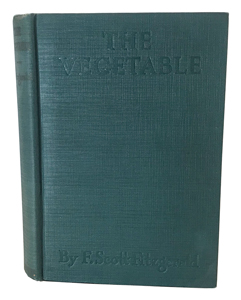 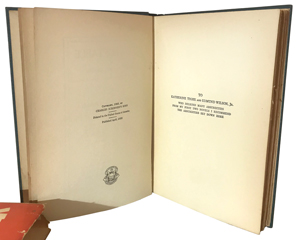 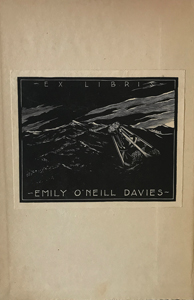 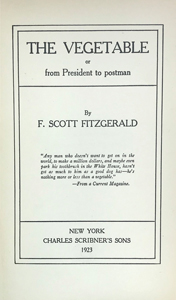 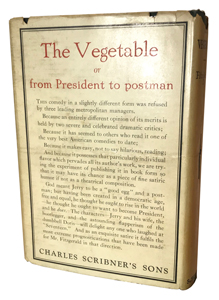 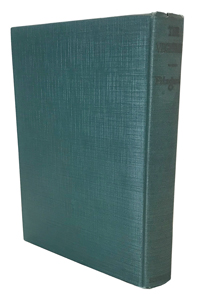 First edition of The Vegetable, signed on the play's opening night by F. Scott Fitzgerald and its leading man

Signed book: The Vegetable by F. Scott Fitzgerald. First edition, first printing. NY: Charles Scribner's Sons, 1923. Hardcover with first issue original dust jacket, 145 pages. Signed on the first free end page in exceptional almost lavender fountain pen on the play's opening night by the lead actor, "Ernest Truex," and by the author, "'The best postman in the world,' Atlantic City, Nov. 19th, 1923, F. Scott Fitzgerald." The play premiered on this date at Nixon's Apollo Theatre in Atlantic City. Fitzgerald attended with his wife Zelda, who later observed: 'In brief, the show flopped as flat as one of Aunt Jemina's famous pancakes—Scott and Truex and Harris were terribly disappointed and so was I as I had already spent the first week's N.Y. royalty for a dress to wear to the opening night.' Affixed to the front pastedown is the personal bookplate of Emily O'Neill Davies. Bruccoli A 10.I.a Publication date: April, 27, 1923; 7,650 copies in first edition.

Dust jacket condition: complete and original price of “$1.50” is still on front flap; dust jacket was once folded over and tucked inside book; several tiny chips at corners, otherwise dust jacket in impressive condition except for sunned spine with chips at head and tone, and loss of a thin 2 inches of paper near spine center.

Emily O'Neill Davies Vanderbilt Thayer Whitfield had many names. Her birth name was Emily O'Neill Davies. She was the daughter of Frederick Martin Davies, a New York banker, broker, and noted horseman, who raised his family in a large private house at 20 E. 82nd Street. Her mother, also named Emily O'Neill Davies, was the daughter of Daniel O'Neill, the editor and owner of the Pittsburgh Dispatch. Shortly after Daniel O'Neill died in 1877, leaving a fortune valued at $8,000,000, his wife Emma (nee, Seely) married his brother, Eugene M. O'Neill, who resumed control of the Dispatch.

Frederick Martin Davies was the cousin of Bradley and Townsend Martin, as well as best friend of Alfred Gwynne Vanderbilt. Ironically, Davies died the day before Vanderbilt set sail on the ill-fated Lusitania. It seemed a fitting twist of fate that in a fairy-tale wedding at Grace Church in Manhattan in 1923, Davies' beautiful young daughter Emily would marry Vanderbilt's son, William Henry Vanderbilt III—the same year Fitzgerald’s The Vegetable was published and first staged.