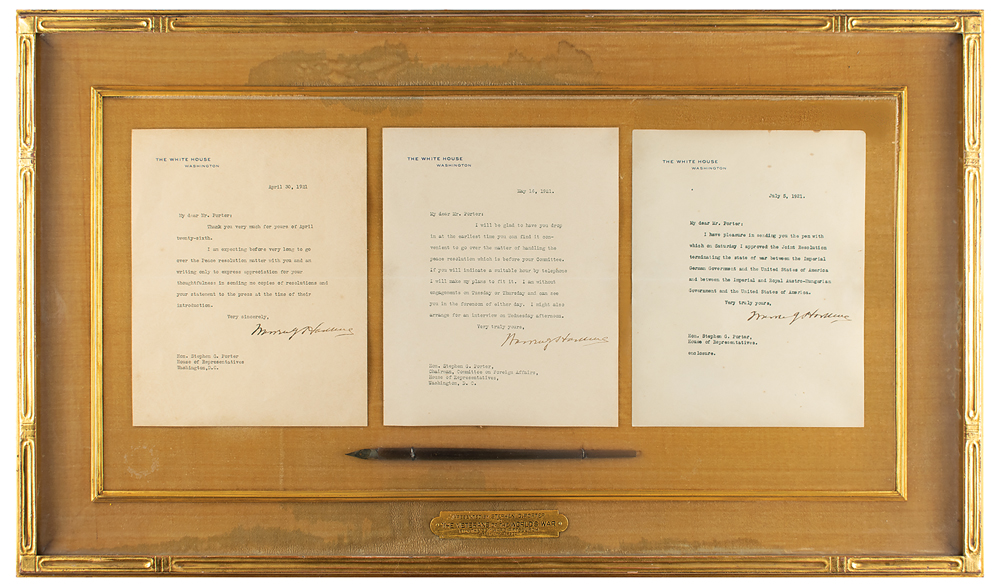 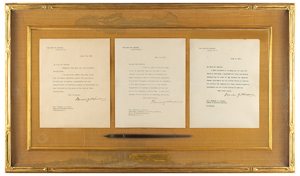 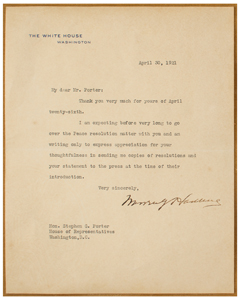 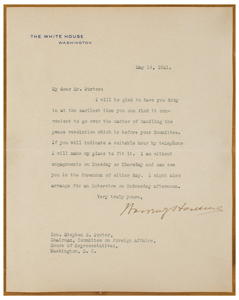 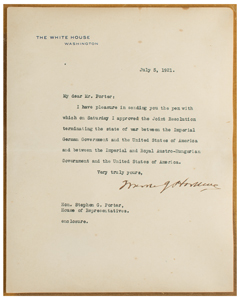 Extraordinary World War I archive comprising the bill signing pen used by President Harding to adopt the 'Knox-Porter Resolution' on July 2, 1921, terminating US involvement in WWI; plus three TLSs as president, each one page, 7 x 8.75, White House letterhead, April 30-July 5, 1921, all to the Hon. Stephen G. Porter, Chairman of the Committee on Foreign Affairs, who introduced the bill in the House of Representatives. The bill-signing pen is a simple dipping pen, measuring 8.75″ long, exhibiting ink blotches on the nib.

April 30, 1921, in part: "I am expecting before very long to go over the Peace resolution matter with you and am writing only to express appreciation for your thoughtfulness in sending me copies of resolutions and your statement to the press at the time of their introduction."

May 16, 1921, in part: "I will be glad to have you drop in at the earliest time you can find it convenient to go over the matter of handing the peace resolution which is before your Committee. If you will indicate a suitable hour by telephone I will make my plans to fit it."

The pen and letters are mounted on a suede backing and framed with an engraved plaque, "Presented by Stephen G. Porter to The Veterans of the World's War from the 26th Ward Pittsburgh, February 20, 1922," and framed to an overall size of 29 x 17. The letters and pen are all in fine condition; the old cloth matting is stained and worn, in no way affecting the items themselves.

On July 2, 1921, President Harding signed the 'Knox-Porter Resolution' into law at the Frelinghuysen estate in Raritan, New Jersey, officially declaring an end to the state of war between the United States and the Imperial German Government. On the next day, the Nashville Banner reported on the simple ceremony: 'Harding sat at an old mahogany table. He used a small, black-handled pen, which will be presented to Representative Porter, who drafted the final form of the resolution...[He] carefully adjusted his glasses and affixed his signature, remarking to those crowded about him: 'That's it.'' The Pittsburg Daily Headlight further noted that the simple pen had been provided by Senator Frelinghuysen, and that after signing 'the ink dripped from the pen and made a blot the size of a 5-cent piece on the page, almost effacing the 'G.' of the President's signature.'

The joint resolution of the US Congress was derived from two separate resolutions drafted by Senator Philander Knox and Representative Stephen Porter, both Republicans from Pennsylvania. By declaring peace, the United States hoped to consolidate its power in the postwar world and play a prominent role in the treaty-making process.