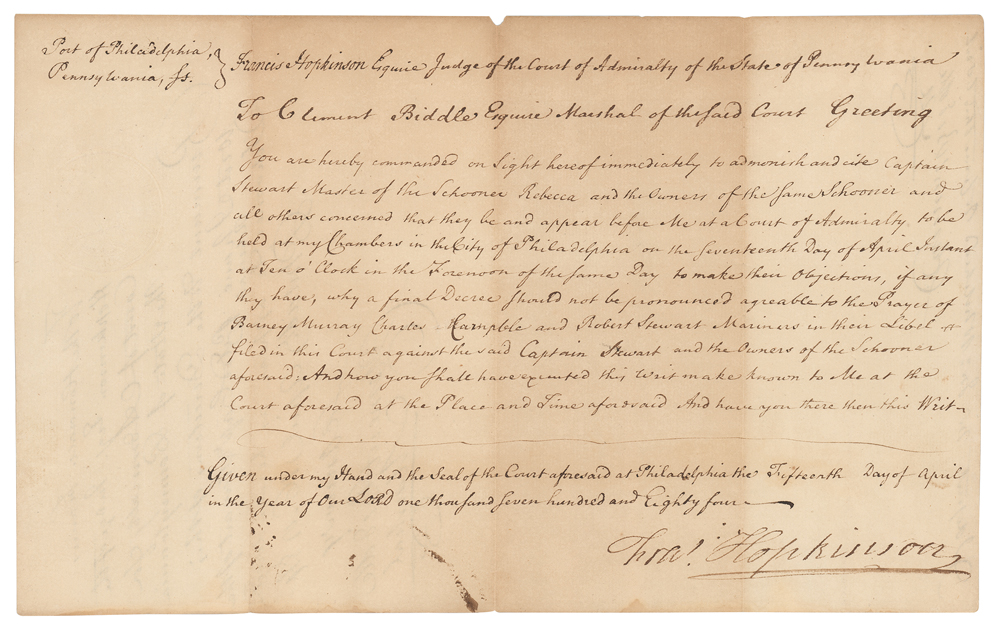 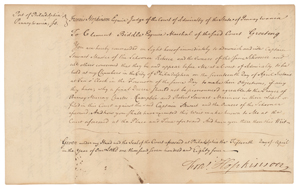 Signer of the Declaration of Independence from New Jersey (1737-1791) who is also known as the designer of the first official American flag. Manuscript DS, signed “Fra's Hopkinson,” one page, 12 x 7.5, April 15, 1784. As judge of the Court of Admiralty, Francis Hopkinson orders Marshal Clement Biddle to summon Captain Stewart and the owners of the schooner Rebecca to court to respond to the complaint of three sailors for their wages in assisting in salvaging a part of the rigging and sails of a wrecked ship. Signed at the conclusion in ink by Hopkinson, and endorsed on the reverse by Biddle. In fine condition, with toning to the center, and a small edge chip.

In February, the Rebecca had sailed from Jamaica to Havana, Cuba. On March 18, the Rebecca came upon the English ship Mercury, which had run aground on Jardin’s reef with a cargo of sugar bound for Bristol. The crew had abandoned the Mercury, and although newspapers reported that the Mercury was 'an entire wreck,' the crew of the Rebecca apparently salvaged a portion of its tackle and sails. The Rebecca then sailed on to Philadelphia, where it arrived by April 12. The court evidently resolved this case quickly, as the Rebecca with Stewart as master left Philadelphia by April 28 for Jamaica.

In 1792, Hopkinson published forty-nine of his decisions from the Admiralty Court in the third volume of his Miscellaneous Essays and Occasional Writings. Although this case was not among those published, approximately one quarter of those Hopkinson included involved seamen who were suing for their wages. Hopkinson generally sided with aggrieved sailors, and in Patrick Mahoon et al. v. the Brig Glocester, Hopkinson held that 'Mariners are generally engaged on shore, and always sue for their wages in this court. In the one case the mariners are paid monthly wages, or by the run, in the other by a share of the booty taken. There is the same reason in both cases. But I am of opinion that the articles are not the true foundation of a seaman’s claim. If one or more mariners should enter on board a vessel, with the knowledge and consent of the master, should receive his orders and perform the duties of the station, they would be entitled to customary wages, or a proportion of the booty taken in common with the rest of the crew, although they had signed no articles at all, the right is not founded in the articles, but in the service.'