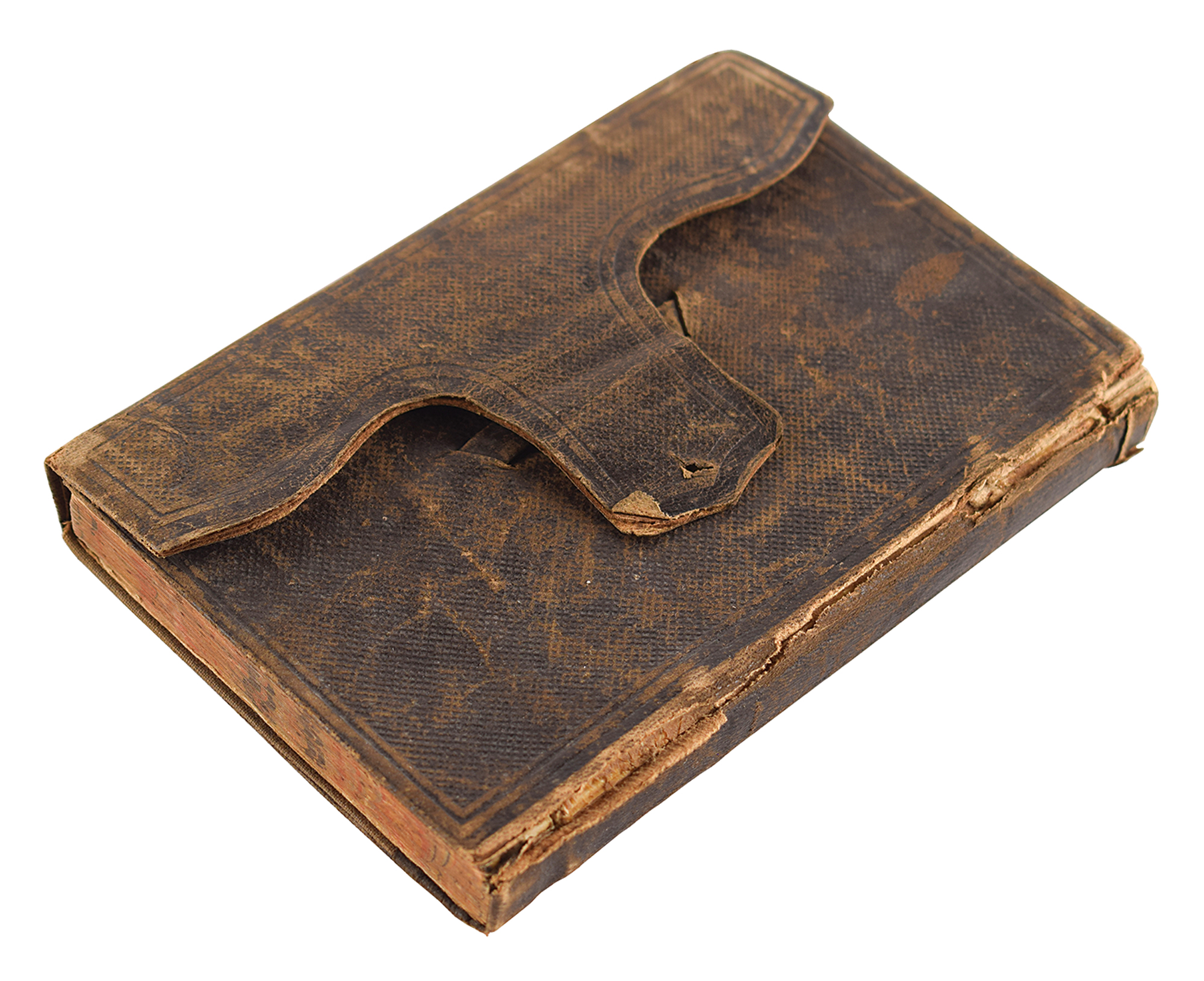 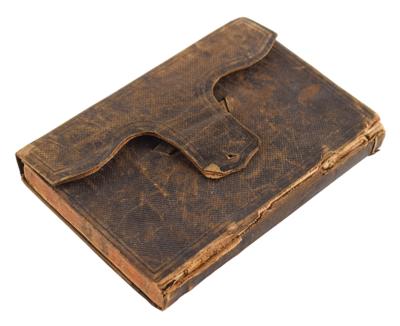 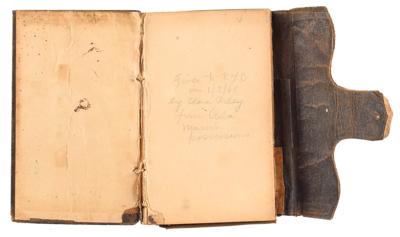 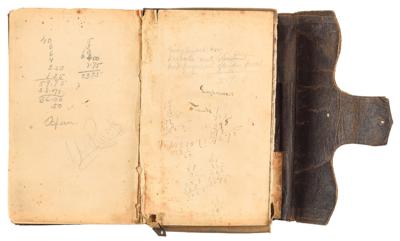 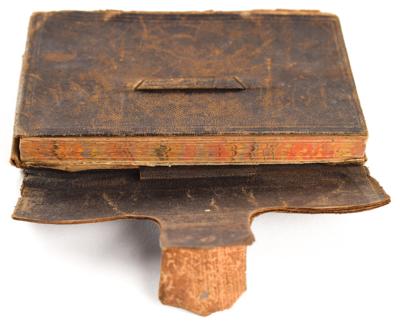 January 9: “Placed under arrest for not having out fatigue party.”

February 11: “Went on another scout. Searched the house of a Mr. Church, supposed to aid rebels. Slept there during the night. Snow”

February 12: “Started to secure the sloop belonging to Farrell. Fell overboards. Searched house of a Mr. Young. Remained at a Dr. Linton’s during the night.”

February 24: “Heavy storm of wind which blew down my tent & nearly all in the Camp”

March 9: “Feb. 15 The Rebels evacuate Bowling Green [KY], their strongest position in the West, styled by themselves the western Sebastopol.

March 17: “Went to Washington to arrange the sending home of Jacob Norris”

Jacob Norris died on March 16, 1862, at the Regimental Hospital of “Inflammation of the Bowels contracted in line of duty, by reason of exposure to wet and cold.” After his death, his mother Mary Norris received a pension of $8 per month for his service.

May 12: “John McQuaid of our Co. died at Regimental Hospital”

Private John McQuaid of Company A mustered in with Ruoff on July 26, 1861, and died at Washington, D.C.

May 18: “Received orders to hold ourselves in readiness to March at a moments notice”

Begun in 1839 by Alvin Adams, a produce merchant ruined by the Panic of 1837, the Adams Express Company began in Massachusetts and rapidly expanded its delivery service of money, mail, and packages throughout the nation. Together with Wells Fargo and American Express, Adams Express was one of the major express companies operating at the time Civil War.

June 30: “Started for the seat of action, destination supposed to be Richmond”

The Peninsula Campaign of March to July 1862 was a Union offensive against the Confederate capital of Richmond, led by Major General George B. McClellan. More than 100,000 Union soldiers traveled by steamboat to the Virginia Peninsula formed by the York and James Rivers and moved northwestward toward Richmond. General Joseph E. Johnston initially commanded the Confederate defenders, but when he was wounded on May 31, the more aggressive General Robert E. Lee took command and attacked the Union forces, forcing McClellan’s retreat down the peninsula and eventually back to Washington.

July 5: “Started at 4 o’clock & arrived at Harrisons Landing in Afternoon and started to Join Kearny Division”

General Philip Kearny Jr. (1815-1862) was a career army officer, veteran of the Mexican War, and commander of the 3rd Division of the III Corps during the Peninsula Campaign. He was killed on September 1, 1862, at the Battle of Chantilly.

July 8: “Reviewed by President Lincoln, who pronounced the Regiment a fine one.”

President Abraham Lincoln arrived at Harrison’s Landing on the James River at 6 p.m. on July 8 and reviewed the army by corps and division until 9 p.m. Soldiers cheered him as he rode by waving his stovepipe hat. He left to return to Washington in morning of July 9, stopping at Fortress Monroe to visit batteries and review troops.

July 15: “Sick all day with Diarrhea Brigade drill in the Afternoon but owing to my sickness I did not go out with the Company”

August 1: “12 M. Awoke from sleep by the noise of heavy firing in the direction of the Landing which proved to be our gun-boats shelling the Rebels opposite. Lasted one hour.”

Confederate batteries consisting of forty-three guns at Coggins Point on the south side of the James River fire over a thousand shells at the Union camp but inflict minimal damage. In response a small Union force crosses the river to break up gun emplacements and discourage further bombardment.

August 5: “Rec’d orders to hold ourselves in readiness to march with two days rations in our haversacks.”

August 6: “The above order countermanded”

August 11: “Rec’d orders to hold ourselves in readiness to march Rec’d a box from home. Knapsacks sent away”

August 13: “Left Harrison’s Landing about 4 o’clock A.M. and marched about 12 miles to the Chickahominy; our Regt ordered across the creek as picket & our Co. A ordered out as scouting party; scouted about 3 miles, returned and found that the reg’t had been ordered back about a mile.”

August 18: “Marched down to the wharf after passing through Yorktown, expecting to embark on steamboat for Alexandria, but had to lay over all night.”

August 22: “Disembarked and after marching through Alexandria got on cars of Orange & Alex R.R. and went to Warrenton Junction where we camped for the night”

August 23-26: “Marched a short distance and the rest of the time laid in Camp, where I was taken sick with Dys[entery]”

August 28: “Having heard that Jackson the Rebel Gen. was in our rear the army was ordered to move towards Manassas where he was; but, being too sick to walk I was obliged to get into the ambulance in which I remained until the morning of the 29th when the army, having come up with the Rebels, I had to get out in the neighborhood of the battle ground while the ambulances went to the battle field for the wounded.”

August 30: “Got into a wagon to be taken to a hospital which was near Centreville; there not being sufficient room in the tents I was obliged to lay out in the open air, in a heavy rain storm.”

August 31: “Was put into an ambulance with three wounded men & started for Washington where we arrived on the afternoon of the 1st of Sept. and were put in the Mt Pleasant Hospital.”

September 3: “Was visited by my Brother who had seen my name in the papers as having been wounded.”

September 24: “I am still in the Hospital, though thanks to God, I am now able to walk about, though still very weak and very much reduced.”

October 13: “Was examined at Hospital for my discharge papers.”

November 5: “Received a box from home and a letter from sister Mary. Visited by Capt. Wright of our Regt.”

John H. Ruoff / Ruff (1841-1900) was born in Philadelphia to German immigrant parents. His father was a master baker, who owned $15,000 in real estate in 1860. John H. Ruoff enlisted on July 26, 1861, as a sergeant in Company A of what became the 99th Pennsylvania Volunteer Infantry and served until he was discharged due to illness late in 1862. He returned to Philadelphia, worked as a clerk, and married Ella V. Johnson (1844-1930) in 1867, with the couple having at least three children. In 1870, he worked as a clerk at a meat house in Philadelphia, and by 1880, he was an accountant and was wealthy enough to have a servant. He was a member of local groups of the Grand Army of the Republic, the Masons, the Odd Fellows, the Knights of the Golden Eagle, and other fraternal organizations.

99th Pennsylvania Volunteer Infantry Regiment was organized at Philadelphia from July 26, 1861 through January 18, 1862, as the 32nd Pennsylvania Infantry. On August 8, 1861, the three companies that had been raised were ordered to Washington, and additional companies joined them as they were raised. In February 1862, two companies from the disbanded 65th Pennsylvania Infantry joined the regiment bringing it to full strength. It served in the defenses of Washington, D.C. until October 1861, when it became part of the Army of the Potomac until February 1862. It served in the Military District of Washington again until June 1862, when it became part of the III Corps of the Army of the Potomac. It remained in the III Corps in different brigades and divisions until March 1864, when the regiment became part of the II Corps. The 99th Pennsylvania Infantry was mustered out on July 1, 1865. During its service, the regiment participated in the following battles: the Second Battle of Bull Run, Fredericksburg, Chancellorsville, Gettysburg, the Wilderness, Spotsylvania, Cold Harbor, and the Siege of Petersburg, among others. It was present at the surrender of the Army of Northern Virginia in April 1865, and participated in the Grand Review of the Armies on May 23. The regiment lost 235 men during service, 122 killed or mortally wounded, and 113 of disease.