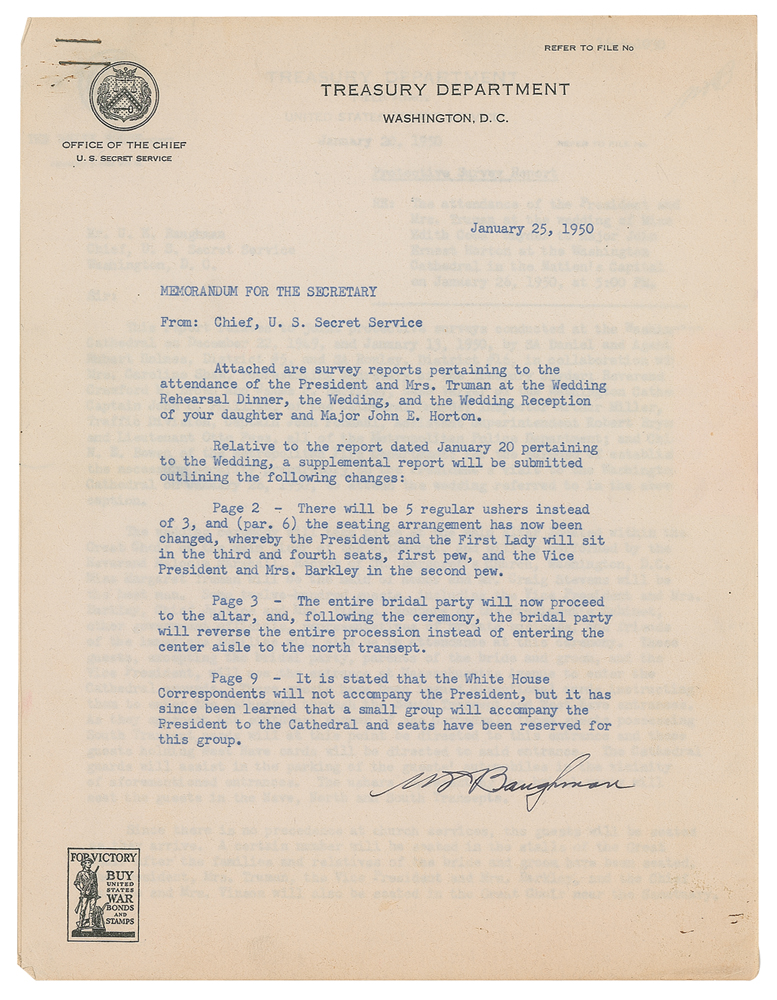 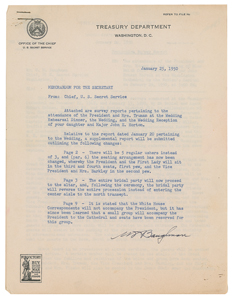 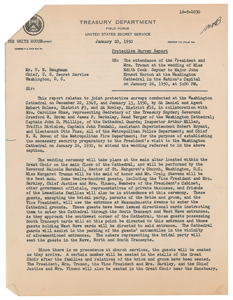 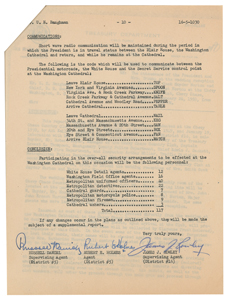 Fascinating 25-page packet of Treasury Department material related to the protection of President Harry S. Truman prior to his attendance at the wedding events of John Ernest Horton and Edith Cook Snyder, the daughter of Secretary of the Treasury John Wesley Snyder. The stapled packet, 8 x 10.5, leads with a typed memorandum from the Chief of the U.S. Secret Service to John Snyder, dated January 25, 1950, which reads, in part: “Attached are survey reports pertaining to the attendance of the President and Mrs. Truman at the Wedding Rehearsal Dinner, the Wedding, and the Wedding Reception of your daughter and Major John E. Horton,” which is signed at the conclusion by U. E. Baughman. The following 24 pages consist of a “Protective Survey Report” for the wedding ceremony, the wedding reception ((January 26th), and the rehearsal dinner (January 24th), with first page of each report initialed at the top by Baughman. Each report offers detailed breakdowns of guests, times, locations, and protocol related to the wedding, with sections titled “Itinerary,” “Security,” “Post Assignments,” “Instructions to Agents,” “Cars,” “Press and Photographers,” “Protective Research,” “Communications,” and “Conclusion,” which lists a total of 117 members of security for the ceremony, 90 for the reception, and 42 for the rehearsal, with the first two reports signed at the conclusion by various attending agents. In fine condition. That same year, a pair of militant Puerto Rican pro-independence activists, Oscar Collazo and Griselio Torresola, raided the Blair House, the residence of the Trumans during the renovation of the White House, with the aim of killing the president. Both men were stopped before gaining entry to the house, with Torresola mortally wounding White House Police officer Leslie Coffelt, who killed him in return fire, and secret service agents wounding and capturing Collazo.