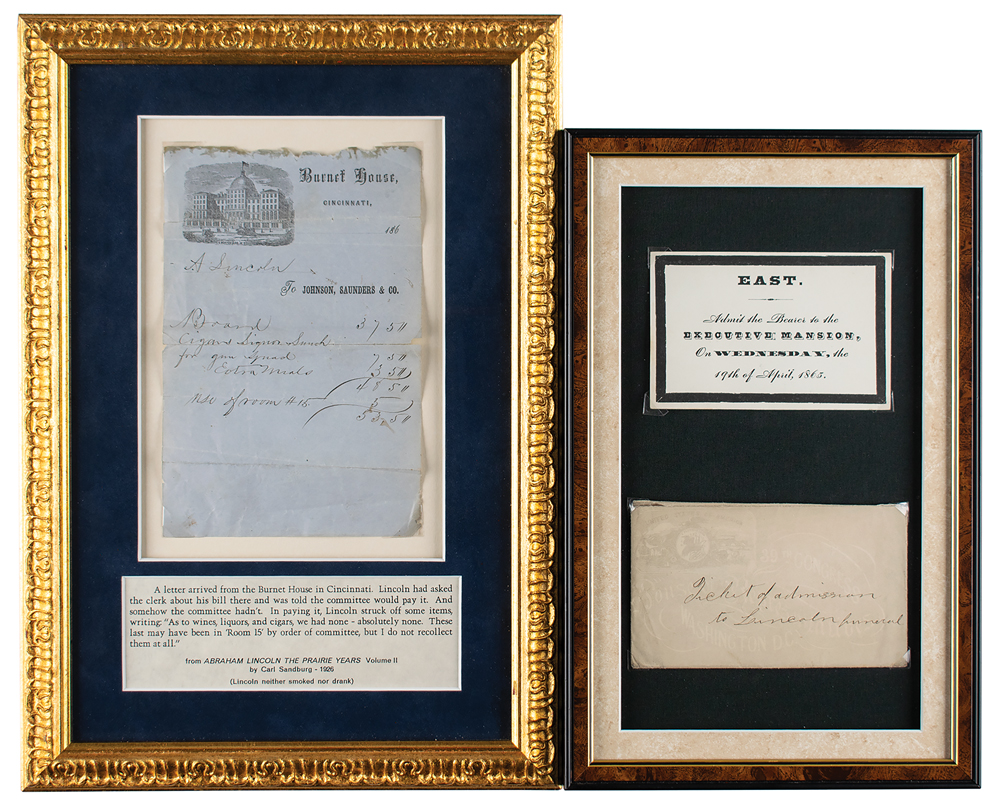 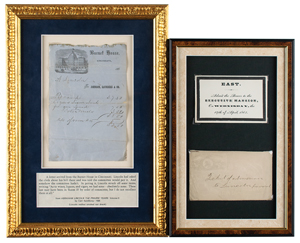 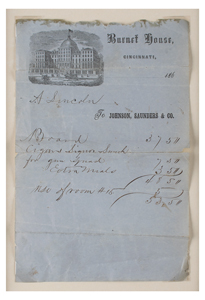 Remarkable pairing of items, representing the absolute beginning and end of Abraham Lincoln's presidency: a bill representing his stay in Cincinnati in September 1859, where he was beginning his presidential campaign; and an admission pass for Lincoln's White House funeral.

The one-of-a-kind manuscript, being a reissued bill for outstanding charges from the Burnet House in Cincinnati, is one page, 5.25 x 8, circa June 1860, sent to the Ohio Republican Committee and charging to "A. Lincoln" a total of $53.50 for "Board," "Cigars, Liquor & Lunch," "Extra Meals," and "Use of room #15" during his visit in September 1859. Lincoln went to Cincinnati to discuss his potential nomination with influential Ohio Republicans, and gave early campaign speeches to gain exposure for his presumed presidential bid. Part of the bill from his stay went unpaid—it was supposed to have been taken care of by a Republican committee that included future Ohio Congressman Benjamin Eggleston—and the hotel invoiced Lincoln again in June 1860, after he received the Republican nomination. Confused by the charges—Lincoln neither smoked nor drank—he inquired about it to Cincinnati judge William M. Dickson, noting his suspicion of the bill: 'As to wines, liquors & cigars, we had none—absolutely none…I can and will pay it if it is right; but I do not wish to be diddled!' Dickson looked into the matter, and replied that the charges had been made by members of the Ohio State Republican Committee Richard M. Corwine and Benjamin Eggleston: they had ordered the liquor and cigars for the musicians, and the extra suppers were for some of them too. Dickson explained that he took care of the bill, and would share the expense with his Republican friends. The episode is documented in Volume II of Carl Sandburg's 'Abraham Lincoln: The Prairie Years,' and in Lincoln's collected letters. The present document was evidently submitted to Eggleston for remuneration; the consignor's husband’s father’s sister married George Eggleston Malone, and this document has descended through the family. Corner-mounted, matted, and framed with a caption from Sandburg's book to an overall size of 11.25 x 16.25. This bill has just surfaced—it has never been publicly seen nor sold before.

The rare pass to the White House funeral for the fallen President Abraham Lincoln is printed on a heavy white 5 x 3.25 card with black mourning border, and reads: "East. Admit the Bearer to the Executive Mansion, On Wednesday, the 19th of April, 1865." Includes a contemporary envelope with "39th United States Congress" watermark, annotated: "Ticket of admission to Lincoln funeral." Corner-mounted, matted, and framed together to an overall size of 8.5 x 13.5.

In overall very good to fine condition, with overall creasing to the Burnet House bill.