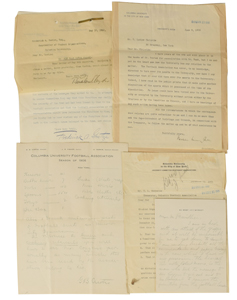 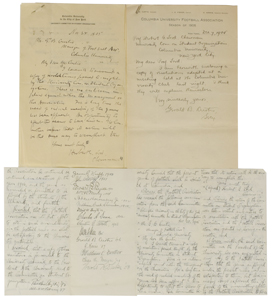 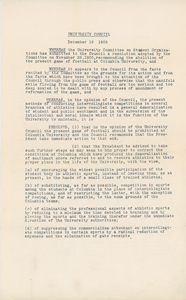 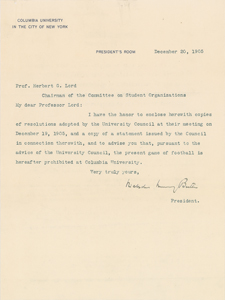 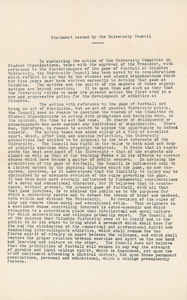 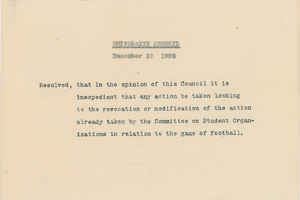 TLS by Nichols Murray Butler, one page, December 20, 1905, to Professor Herbert G. Lord, the chairman of the Committee on Student Organizations, in part: “I have the honor to enclose herewith copies of resolutions adopted by the University Council…and a copy of a statement issued by the Council in connection therewith, and to advise you that, pursuant to the advice of the University Council, the present game of football is hereafter prohibited at Columbia University.” The enclosed resolutions are present, which states, in part: “The manifold evils flowing from the game of football are too serious and too deep seated to be dealt with by any process of amendment or reformation of the game…the present game of football should be prohibited at Columbia University.” Butler’s other three TLSs concern the disposition of assets held by Columbia’s “Football Association.” Other correspondence related to the association and its assets is included, from the likes of Herbert G. Lord, T. L. Chrystie, and Frederick A. Goetze.

Three letters are from concerned citizens to Herbert G. Lord, commending him on his efforts to ban football. One, in part: “The thanks of all parents are due your committee for your action on Foot Ball…May the time return when scholarship and not brutal athletics be the winning advertisement of American schools.” Another, in part: “You are entitled to the thanks of all college graduates for the action of your committee on the football question…I am personally a graduate of Harvard College, I consider it a disgrace to my university that she was not the first to take this action.” Includes various other materials, several other pieces of correspondence, two related issues of the Columbia Spectator, and a Columbia athletics booklet. In overall very good to fine condition.

In 1905, the clamor surrounding the ‘football question’ was reaching a fever pitch. Football’s detractors cited the sport’s violence as abhorrent, and injuries were a growing concern—the Chicago Tribune reported that during the 1905 collegiate football season, 18 players had been killed and 159 had been seriously injured. Furthermore, academics were concerned with the increasing commercialization of college football. Even President Theodore Roosevelt became involved in the controversy as an advocate for reform. Columbia resolved to abolish the sport, becoming the first major university to do so. Ultimately, a rules commission, led by Harvard, was convened, and the rules of the game were revised. The meeting of the rules committee had two lasting impacts—it codified the forward pass as a legal play, and it was from this commission that the NCAA arose. Nevertheless, Columbia maintained the ban on football for two years before permitting the sport again for the 1908 season.