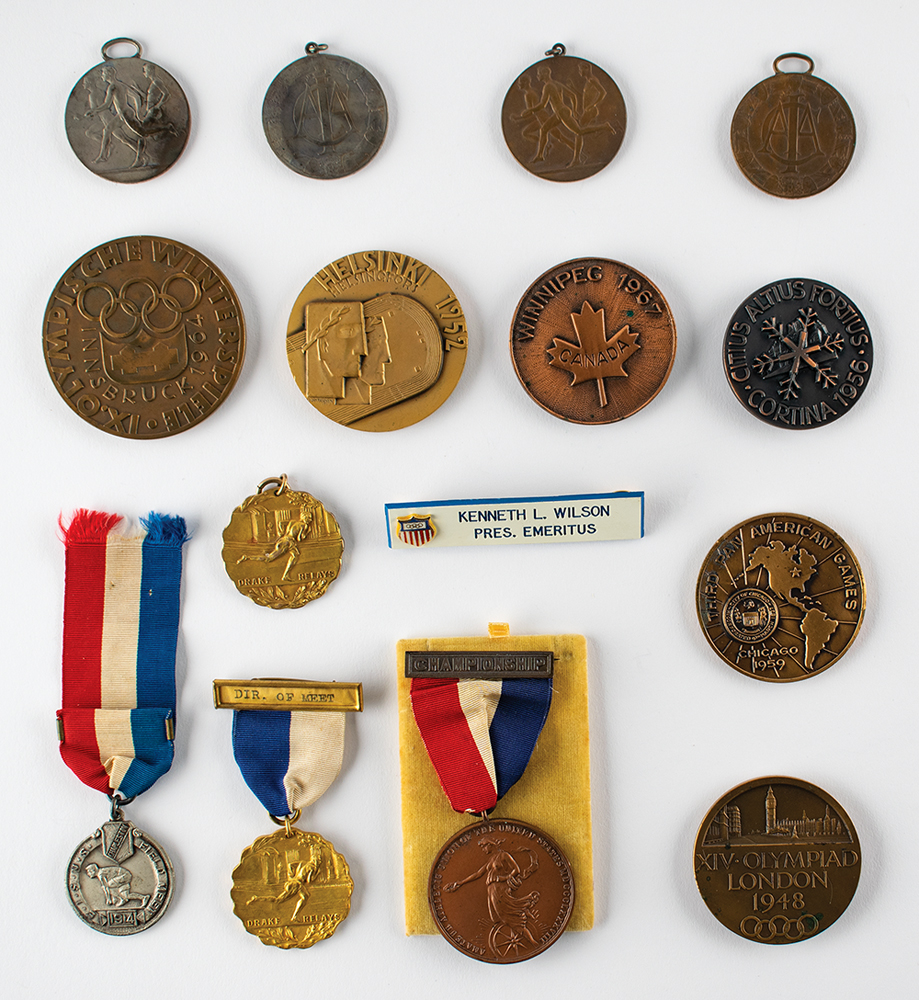 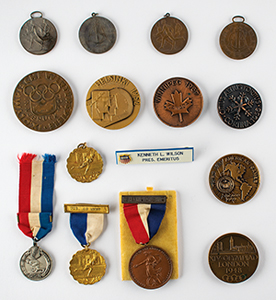 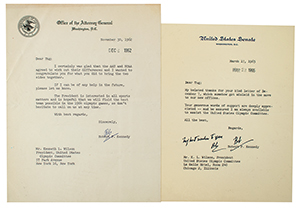 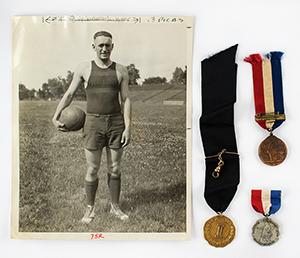 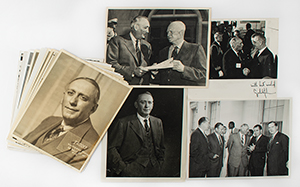 Exceptional archive of material from the personal estate of Tug Wilson, which contains various medals, correspondence, and photographs related to his careers as an athlete at the University of Illinois, the athletic director and head track coach at Drake University, the second commissioner of the Big Ten Conference (1945 to 1961), and as the president of the United States Olympic Committee (1953 to 1965).

Of particular interest are three typed letters from Robert F. Kennedy, with two signed “Bob” and one signed in autopen, dated to 1962, 1964, and 1965, with the earliest letter, on Attorney General letterhead, reading: “I certainly was glad that the AAU and NCAA agreed to work out their differences and I wanted to congratulate you for what you did to bring the two sides together. If I can be of any help in the future, please let me know. The President is interested in all sports matters and is hopeful that we will field the best team possible in the 1964 olympic games, so don’t hesitate to call on us at any time.” The second TLS, United States Senate letterhead, in part: “Your generous words of support are deeply appreciated—and be assured I am always available to assist the United States Olympic Committee.” Kennedy signs a brief handwritten postscript: “My very best wishes to you, Bob.”

The archive features a total of 18 medals awarded to Wilson over the span of six decades, which cover his careers as a track-and-field athlete, an up-and-coming sporting official, and then ultimately as the head of the NOC. The medals, listed chronologically, are as follows:

A bronze 1913 medal with ribbon for an athletic competition at the Eastern Illinois State Normal School, with reverse engraved: “Hammer Throw.”

A bronze-tone AAU medal from 1920 with ribbon and “Championship” bar, and the reverse engraved: “Javelin Throw, 1920.”

A gold-tone “Athletic Attainment” medal with ribbon from the University of Illinois (circa 1920), engraved on the reverse: “Kenneth L. Wilson.”

A silver-tone 1921 medal with ribbon from the Central Association A.A.U. Championship, with revere engraved: “Javelin Throw, 1921.”

A gold-plated 1924 “Official” medal from the Drake University relays, with ribbon and name bar, “Dir. of Meet,” and reverse of medal engraved: “1924, Official.” Accompanied by a program for the 1923 Drake Relays.

A gold-tone “Official” medal (Jostens) with ribbon from the “60th Annual Junior & Senior National A.A.U. Track & Field Championships,” which were held at Marquette University on July 2-3, 1948, which is accompanied by a page from the official program depicting Wilson.

Commemorative medals from the Pan American Games held in Chicago (1959) and Winnipeg (1967).

Also included are a group of 19 vintage photos of Wilson, matte-finish and glossy, ranging in size from 6.5 x 3.75 to 10 x 8, with several showing him with other notable figures of the day, including: Dwight D. Eisenhower, Lyndon B. Johnson (bearing a secretarial autograph), Prince Philip, Duke of Edinburgh, Richard Nixon, Knute Rockne, Stan Musial, Ray Schalk, and Freddie Lindstrom. One particularly early photo shows Wilson as the captain of the Fighting Illini basketball team. Several photos bear notations to borders and to the reverse. In overall fine condition.