Documented by the Edgar Allan Poe Society, a rare letter on the autographs of his ancestors, "Gen: David Poe" and "David Poe Jr."—"Owing to peculiar circumstances, I have in my possession no autograph of either" 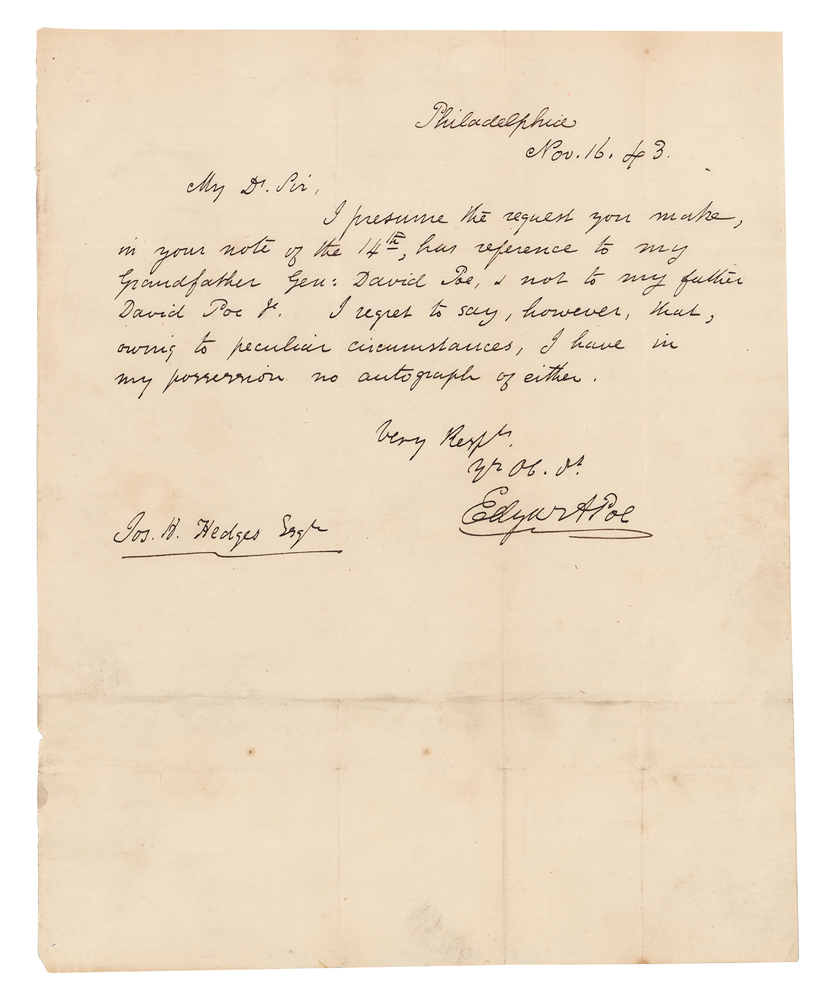 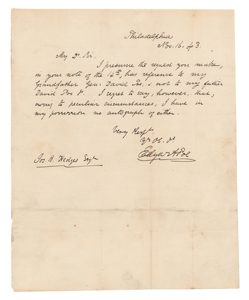 Documented by the Edgar Allan Poe Society, a rare letter on the autographs of his ancestors, "Gen: David Poe" and "David Poe Jr."—"Owing to peculiar circumstances, I have in my possession no autograph of either"

Remarkable ALS signed “Edgar A. Poe,” one page, 8 x 9.75, November 16, 1843. Letter to Joseph H. Hedges, in full: "I presume the request you make, in your note of the 14th, has reference to my grandfather Gen: David Poe, & not to my father David Poe Jr. I regret to say, however, that, owing to peculiar circumstances, I have in my possession no autograph of either." In fine condition, with light show-through at the left edge from an old tape fragment on the reverse.

The recipient, Joseph H. Hedges (ca. 1828-1905) was an early collector of autographs in Philadelphia, clearly seeking the signature of the author's ancestor: either David Poe, Sr., a quartermaster during the American Revolution, or David Poe, Jr., a little-known stage actor. Poe ponders the possibility of both, concluding that his grandfather—who contributed his personal wealth to the patriot cause, earning the esteem of the Marquis de Lafayette and the honorary title of 'General'—would have been more well known to the public.

The "peculiar circumstances" of Poe's upbringing resulted in his having none of their papers. His father, David Poe, Jr., abandoned the family when Edgar was an infant, and died shortly thereafter. His mother, Elizabeth Arnold Hopkins Poe, died just before he turned three, and the three Poe children were split up into three separate households. Young Edgar, taken in by John and Frances Allan (and christened with their surname as his middle name), would have had little in the way of family heirlooms.

By the time he penned this letter, Poe, then a magazine editor living in Philadelphia, had already written some of his best-known horror and mystery tales, including 'The Fall of the House of Usher,' 'The Masque of the Red Death,' and 'The Pit and the Pendulum'; in the same year, he wrote his timeless cryptological classic, 'The Gold Bug.' Boldly penned and boasting a large, clean signature, this is a stunning example of an autograph letter by America's master of the macabre.

This letter has been documented by the Edgar Allan Poe Society of Baltimore.