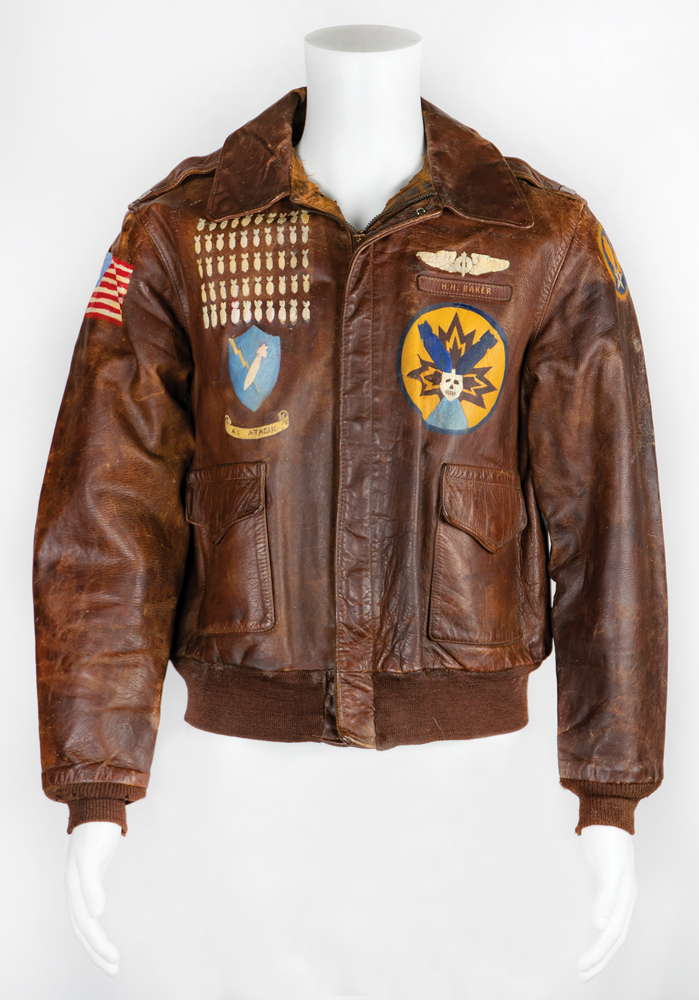 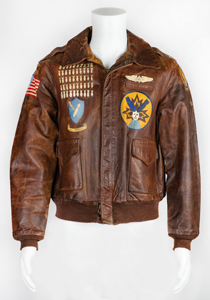 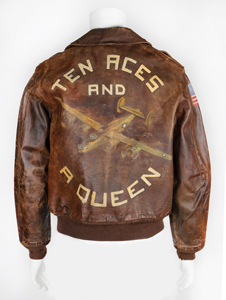 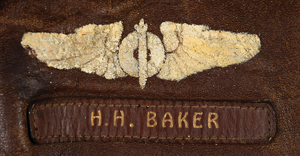 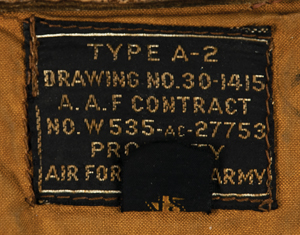 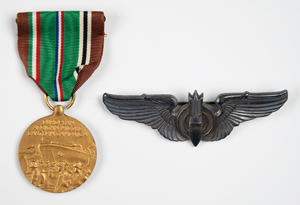 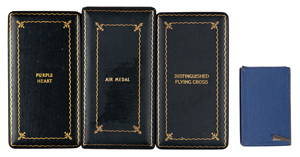 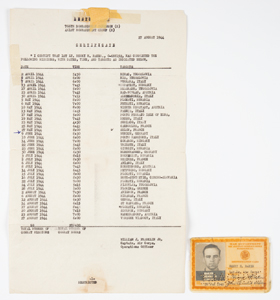 Tremendous archive from the career of First Lieutenant Henry H. Baker, a bombardier in the 15th Air Force, 461st Bomb Group, and 766th Bomb Squadron, which operated on the Italian front during World War II. The collection is highlighted by his leather A-2 bomber jacket, size 42, which is adorned with numerous painted-on symbols and insignia: the right chest features a cluster of 50 white bombs, signifying his 50 flown missions, and the blue emblem of the 461st Bomb Group; the left chest bears his leather name patch, “H. H. Baker,” between bombardier wings and the emblem for the 766th Bombardment Squadron; the right shoulder displays the American flag, the left shoulder bears the Fifteenth Air Force emblem, and both shoulders feature silver 1st Lt. bars. Painted prominently to the back section is a large portrayal of a B-24 in flight between bold white text, “Ten Aces and a Queen,” a reference to the 10-man crew and the aircraft as their queen. The collar retains its original tag, which reads: “Type A-2, Drawing No. 30-1415, A.A.F. Contract, No. W535, AC, 27753, Property Air Forces, U.S. Army.”

The archive also features several of Baker’s military decorations: a cased Distinguished Flying Cross Medal with pin and color bar; a cased Purple Heart Medal with pin and color bar; a cased Air Medal; and a European campaign medal. Also included: Baker’s laminated military I.D. card issued by the War Department on June 26, 1945; his bombardier wings; and an original “Restricted” military certificate listing all 50 of Baker’s completed bombing missions from April 2, 1944 to August 27, 1944, which amounts to 279 combat hours over countries like Italy, Yugoslavia, Hungary, Austria, France, Germany, Czechoslovakia, and Romania. In overall fine condition, with expected wear to jacket from use, age, and storage. Accompanied by extensive research material related to the 461st Bombing Group, the 766th Bomb Squadron, and the mission’s Baker flew; these were obtained from the USAF Historical Research Section in Montgomery, Alabama.