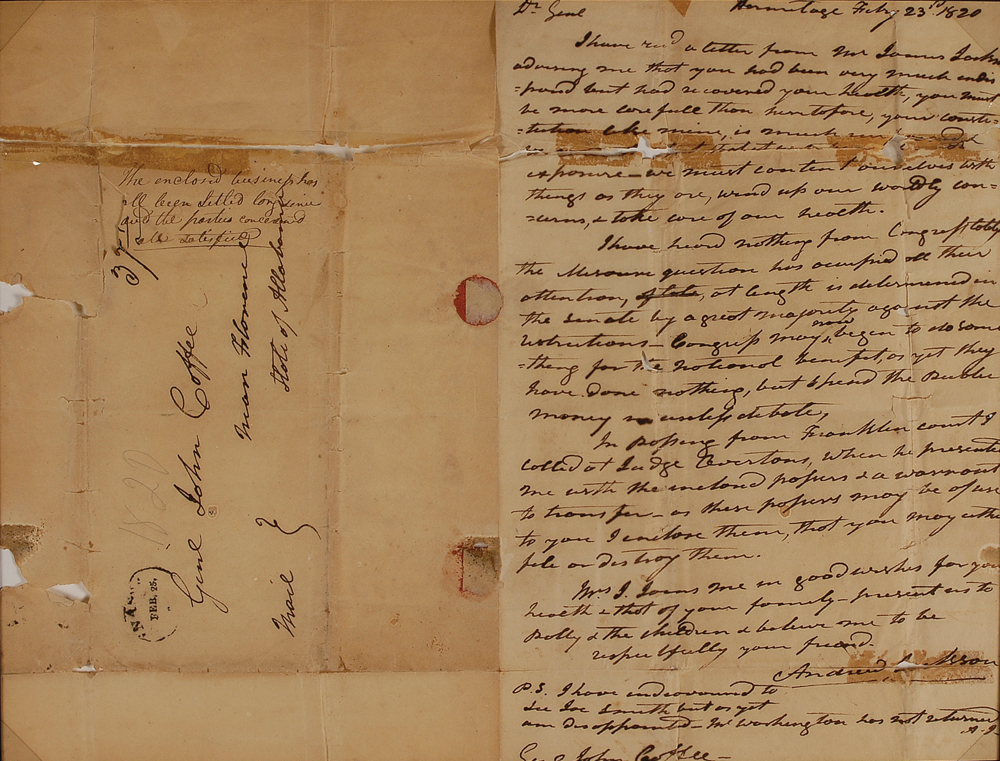 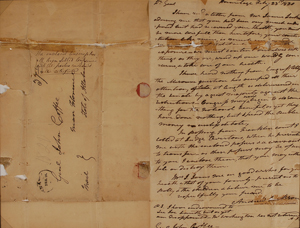 ALS, one page, 7.5 x 11.5, February 23, 1820. Letter to General John Coffee, in part: "I have recd a letter from Mr. James Jackson advising me that you had been very much indisposed but had recovered your health, you must be more carefull than heretofore, your constitution, much like mine…exposure - we must content ourselves with things as they are, wind up our worldly concerns, & take care of our health.

I have heard nothing from Congress…the Misouri question has occupied all their attention, of late, at length is determined in the Senate by a great majority against the instructions. Congress may soon begin to do something for the national benefit, as yet they have done nothing, but spend the public money in useless debate. In passing from Franklin court I called at Judge Overtons, when he presented me with the enclosed papers & a warrant to transfer, as these papers may be of use to you I enclose them, that you may either file or destroy them."

At the bottom, Jackson adds a brief postscript, "P.S. I have endeavored to see Joe Smith but as yet am disappointed. Mr. Washington has not returned. A. J." Reverse of second integral page bears an address panel in another hand and is docketed by Coffee, "The enclosed business has all been settled long since and the parties concerned all satisfied." Double-suede-matted and framed to an overall size of 20.5 x 17. In good to very good condition, with clear tape repairs to the integral address leaf, old tape stains and repairs to the main body of the letter, an areas of paper loss affecting some of the text, as well as the signature.

Jackson expresses disdain for the protracted congressional negotiations that would result in the Missouri Compromise, an agreement between pro- and anti-slavery lawmakers limiting the expansion of slavery in new states admitted to the Union. The agreement admitted Missouri as a slave state and Maine as free, but would exacerbate the growing North-South tensions that led to the Civil War. Both Coffee and Jackson owned slaves, and as president from 1829 to 1837, Jackson showed no interest in abolishing or reforming the peculiar institution.

John Coffee (1772-1833) was a fellow Tennessean who became Jackson's business partner, military associate, confidant, adviser, and fearless friend. Coffee served under Jackson during the Creek War, during which he was promoted to brigadier general, and at the Battle of New Orleans. When Jackson wrote this letter, Coffee was serving as surveyor general of public lands in Alabama. Jackson alludes to his own frequently poor health; on at least one occasion during his presidency, his family questioned whether he would survive a bout of illness. Jackson also mentions John Overton, a Tennessee judge and friend who later became an important advisor to Jackson as president. An exceptionally frank letter in which the future president airs his views on the most contentious issue in nineteenth century American politics.