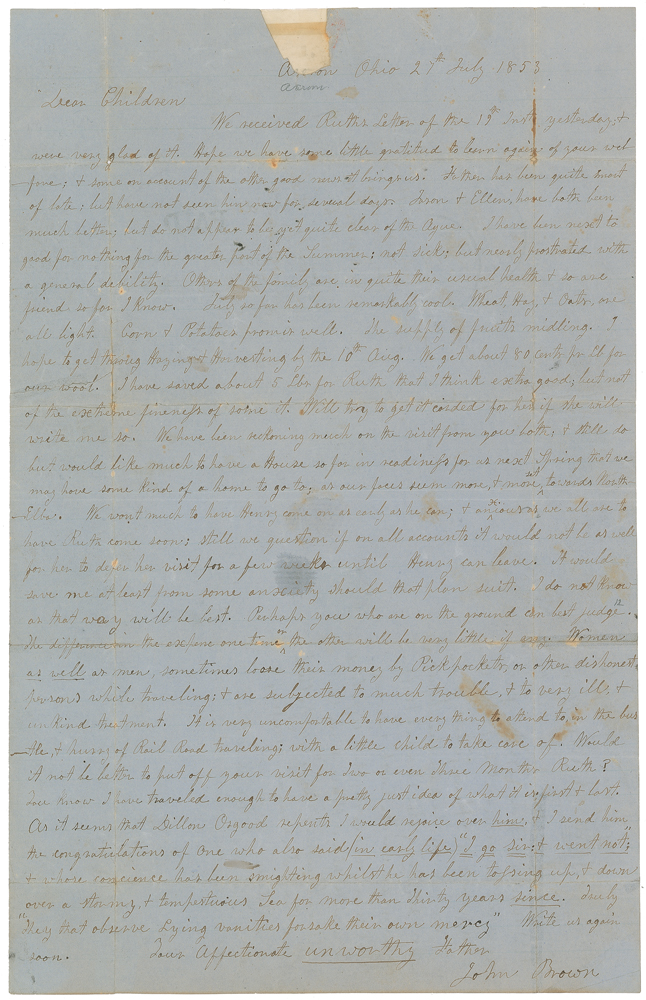 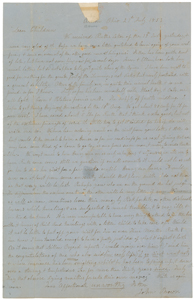 ALS signed “Your Affectionate Unworthy Father, John Brown,” one page, 8 x 12.5, July 27, 1853. Written from Akron, Ohio, a letter to his daughter Ruth, and her husband Henry Thompson, in full (spelling and grammar retained): “We received Ruth’s letter of the 19th inst. yesterday & were very glad of it. Hope we have some little gratitude to learn again of your welfare; & some of the other good news it brings us. Father has been quite smart of late; but have not seen him now for several days. Jason & Ellen, have both been much better; but do not appear to be yet quite clear of the Ague. I have been next to good for nothing for the greater part of the Summer: not sick; but nearly prostrated with a general debility. Others in the family are in quite their usual health & so our friend so far I know. July so far has been remarkably cool. Wheat, Hay, & Oats, are all light. Corn & Potatoes promis well. The supply of fruits midling. I hope to get throug Haying & Harvesting by the 10th Aug. We get about 80 cents pr Lb for our wool. I have saved about 5 Lbs for Ruth that I think extra good; but not of the extreme fineness of some it. Will try to get it corded for her if she will write me so. We have been reckoning much on the visit from you both; & still do but would like much to have a House so for in readiness for us next Spring that we may have some kind of a home to go to; as our faces seem more, & more set towards North-Elba.

We want much to have Henry come on as early as he can; & anxious as we all are to have Ruth come soon; still we question if on all accounts it would not be as well for her to defer her visit for a few weeks until Henry can leave. It would save me at least from some anxiety should that plan suit. I do not know as that way will be best. Perhaps you who are on the ground can best judge. The difference in the expence one time or the other will be very little if any. Women as well as men, sometimes loose their money by Pickpockets, or other dishonest persons while traveling; & are subjected to much trouble, & to very ill, & unkind treatment. It is very uncomfortable to have everything to attend to, in the bustle, & hurry of Rail Road traveling; with a little child to take care of. Would it not be better to put off your visit for two or even three months Ruth? You know I have traveled enough to have a pretty just idea of what it is first & last. As it seems that Dillon Osgood repents I would rejoice over him, & I send him the congratulations of one who also said (in early life) ‘I go sir: & went not’; & whose conscience has been smighting whilst he has been tossing up, & down over a stormy, & tempestuous Sea for more than thirty years since. Truly ‘they that observe lying vanities forsake their own mercy.’ Write us again soon.” Reverse bears a central mailing panel addressed in Brown's own hand, with lower portion annotated in ink by original owner John Croker, "This autograph letter of John Brown was kindly presented to me by Mrs. Ruth (Brown) Thompson, Captain Brown's eldest daughter and wife of Mr. Henry Thompson who was wounded in the shoulder while fighting the Border Ruffians of Kansas with Capt. Brown and who, as his devoted wife told me, would have never shared in the perils of Harper's Ferry, 'but for these said the brave woman pointing to her children.'" In very good to fine condition, with seal-related paper loss to the top edge, and old mounting remnants and old clear tape repairs to fold splits on the reverse.

A reputed expert in fine sheep and wool, Brown entered into a partnership with Colonel Simon Perkins in January 1844, tending to the farmer's flocks of sheep and renting a frame house in Akron, Ohio. After failed attempts to sell the Perkins wool in Springfield, Massachusetts, and then in Europe, Brown moved his family to the Adirondacks of northeastern New York. He purchased 244 acres from local abolitionist Gerrit Smith, who hoped to make the land a refuge for former black slaves, and then settled his family at a remote farm in North Elba in June 1849. Brown’s financial difficulties and unfinished business with Perkins forced him and his family to once more move back to Akron in March 1851, with Ruth and Henry Thompson staying behind at North Elba. Brown viewed the Ohio situation as temporary, noting that “our faces seem more, & more set towards North-Elba.” In 1855 Brown and his family returned to upstate New York, remaining there a short time before the patriarch embarked on a mission that would earn him a place in history. While much of the letter relates to mundane topics like health and weather, the closing portion sheds light on Brown’s strong Calvinist Christian faith, and is highlighted by his selection of Jonah 2:8, “they that observe lying vanities forsake their own mercy.”