Taft weighs in on the "real strength of Coolidge" before the 1928 election: "Principles for him are real rules of action, and not mere planks of a party platform" 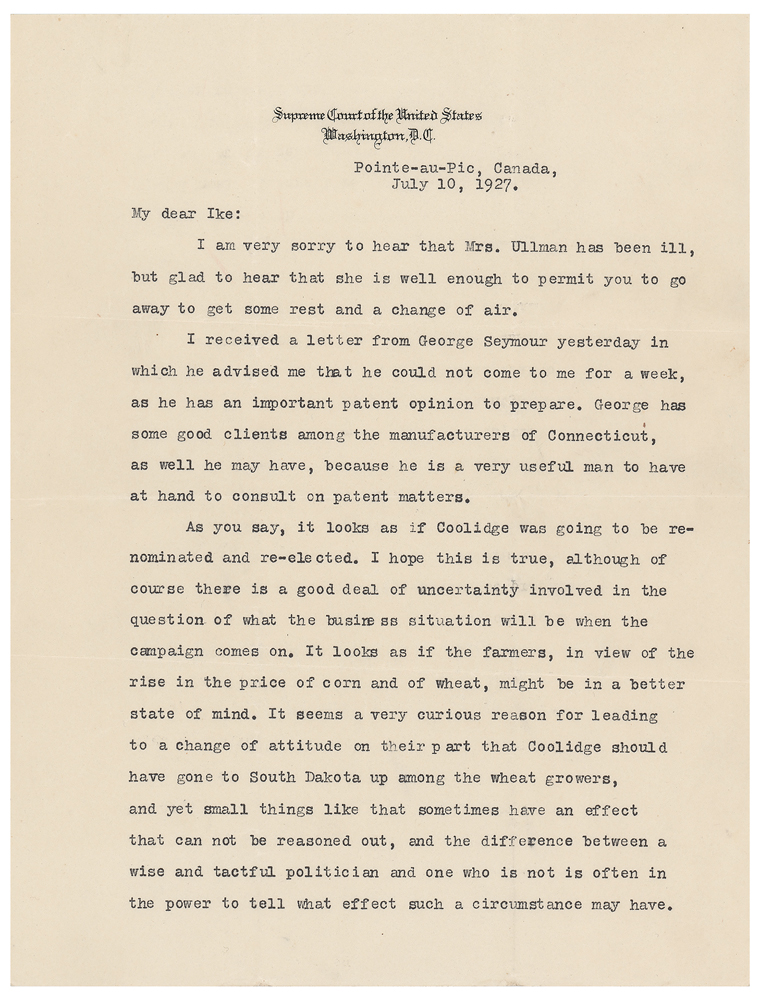 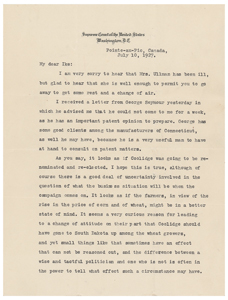 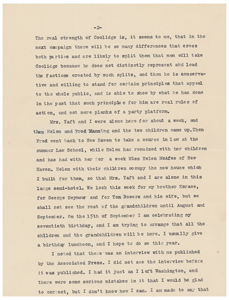 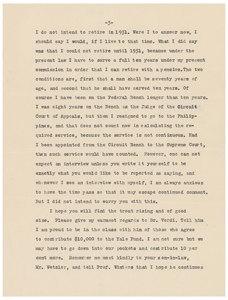 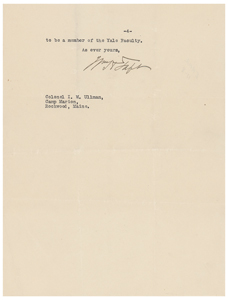 Taft weighs in on the "real strength of Coolidge" before the 1928 election: "Principles for him are real rules of action, and not mere planks of a party platform"

TLS signed “Wm. H. Taft,” four pages, 8 x 10.5, Supreme Court of the United States letterhead, July 10, 1927. Letter to Col. Isaac M. Ullman, in part: "As you say, it looks as if Coolidge was going to be re-nominated and re-elected. I hope this is true, although of course there is a good deal of uncertainty involved in the question of what the business situation will be when the campaign comes on. It looks as if the farmers, in view of the rise in the price of corn and of wheat, might be in a better state of mind…The real strength of Coolidge is, it seems to me, that in the next campaign there will be so many differences that cross both parties and are likely to split them that men will take Coolidge because he does not distinctly represent and lead the factions created by such splits, and then he is conservative and willing to stand for certain principles that appeal to the whole public, and is able to show by what he has done in the past that such principles for him are real rules of action, and not mere planks of a party platform…I noted that there was an interview with me published by the Associated Press. I did not see the interview before it was published. I had it just as I left Washington, and there were some serious mistakes in it that I would be glad to correct, but I don’'t know how I can. I am made to say that I do not intend to retire in 1931. Were I to answer now, I should say I would, if I live to that time. What I did say was that I could not retire until 1931, because under the present law I have to serve a full ten years under my present commission in order that I can retire with a pension…I was eight years on the Bench as the Judge of the Circuit Court of Appeals, but then I resigned to go to the Philippines, and that does not count now in calculating the required service, because the service is not continuous…one can not expect an interview unless you write it yourself to be exactly what you would like to be reported as saying, and whenever I see an interview with myself, I am always anxious to have the time pass so that it may escape continued comment." In fine condition. Provenance: The Malcolm S. Forbes Collection of American Historical Documents, Christie's.