The rare, landmark Hollywood contract that begat Gone With the Wind 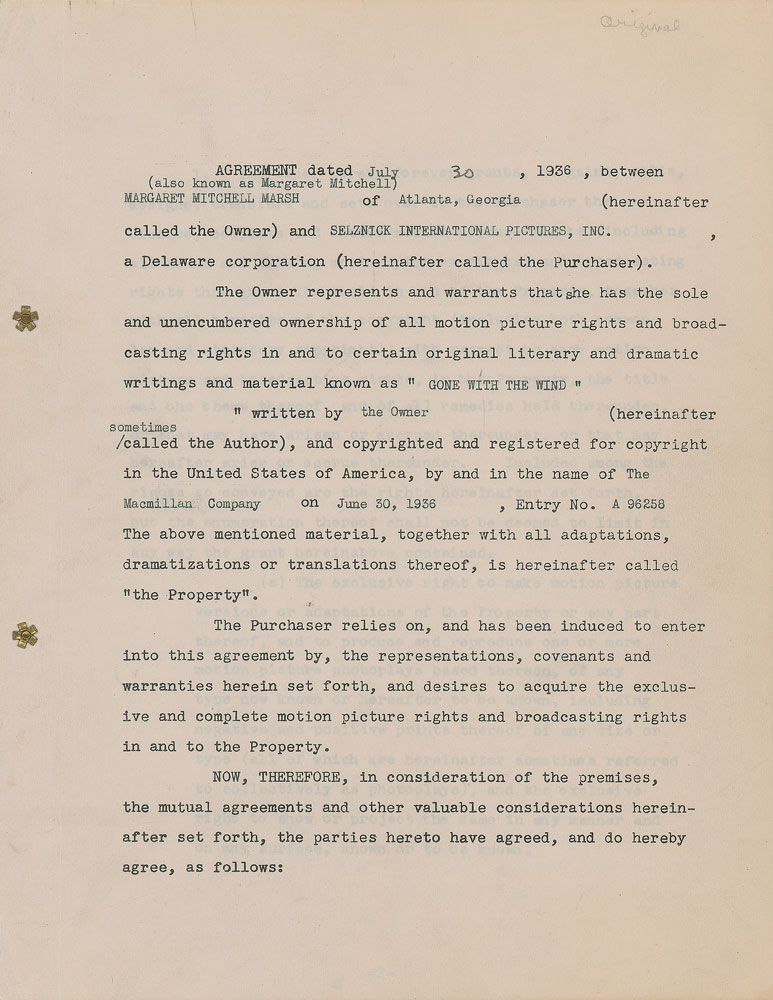 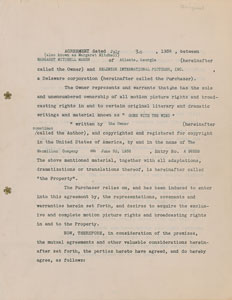 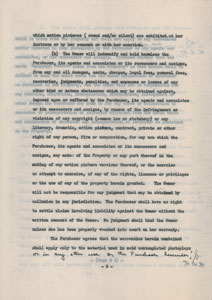 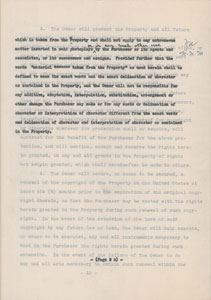 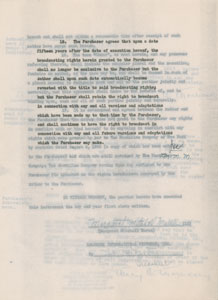 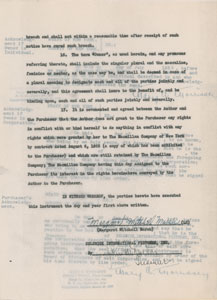 The rare, landmark Hollywood contract that begat Gone With the Wind

Historic DS, signed “Margaret Mitchell Marsh,” eighteen pages, 8.5 x 11, July 30, 1936. Agreement between Mitchell and Selznick International Pictures, in which the author affirms that she has unencumbered ownership "to certain original literary and dramatic writings and material known as 'Gone With the Wind,'" and assigns the motion picture and broadcasting rights to Selznick for $50,000. Signed at the conclusion in full by Mitchell, who also initials three pages, "M. M. M." Countersigned by Selznick International's treasurer John Wharton, who also adds his initials three times. In fine condition.

From the moment it was known that Selznick International Pictures had secured the motion picture rights to her seismically popular novel Gone With the Wind, Margaret Mitchell was swept up into a wind storm for the rest of her life.

This is the ultimate document in the Gone With the Wind film universe and one of the few truly historic and exceptional Hollywood contracts as well as an historic literary document. It is the exceedingly rare and important agreement selling the novel's film rights to Selznick for $50,000. It is the only known, signed copy in private hands.

The 18-page contract between Margaret Mitchell Marsh of Atlanta and Selznick International Pictures (SIP) of Culver City is dated July 30, 1936. Mitchell has signed and John Wharton (company treasurer from 1935 to 1940) has signed for SIP. Changes in three places are initialed by both parties. The front page of the agreement has the pencil notation "original" in the upper right corner and the last page is the signed notary form for the State of New York attesting to the fact that both parties signed. This contract is believed to be the Selznick International Pictures copy.

By June 1936, positive reviews for Mitchell's novel were appearing across the country. The frenzy had begun. And so, after warning SIP that she thought it would be impossible to make a motion picture from the novel, she signed the above contract, granting to Selznick International Pictures 'the exclusive, complete and entire motion picture and broadcasting rights, including television, in the property known as Gone With the Wind.' In adjusted dollars, GWTW is still the domestic box office leader with over $1.8 billion.

Apart from being ground zero in the birth of the iconic film, this agreement is also significant because there are almost no GWTW documents signed by Mitchell. With this contract Selznick had landed the film rights to the biggest novel of the day, some say the century, paying the largest fee ever paid to that time for a first work of fiction. Being the 'Holy Grail' of Gone With the Wind film documents, it is the true nucleus of one of the most popular films of the twentieth century and the supreme touchstone to the ultimate Hollywood deal of the Golden Age.