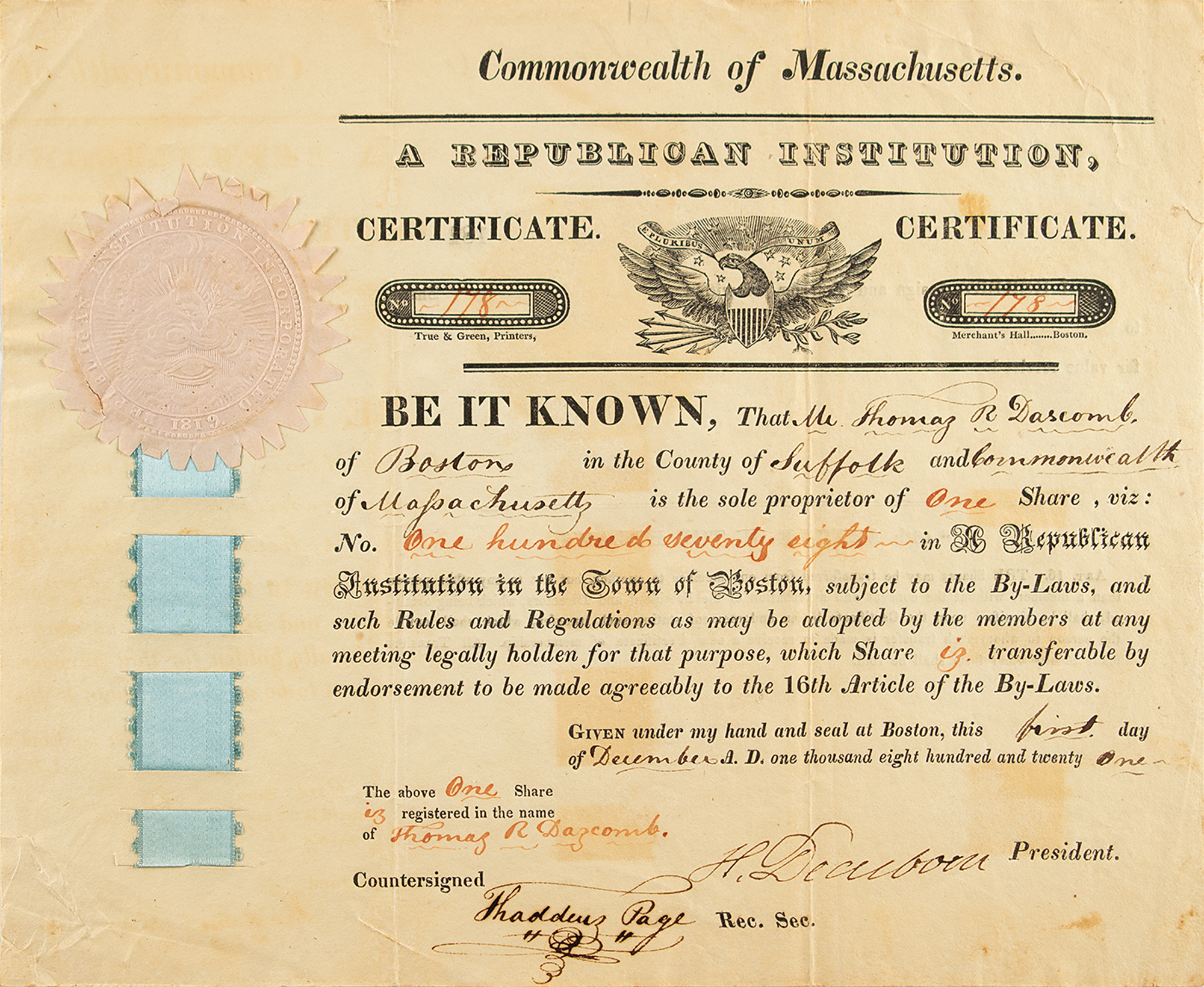 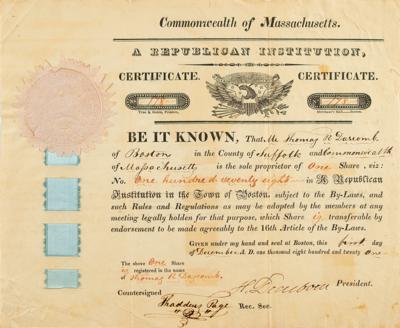 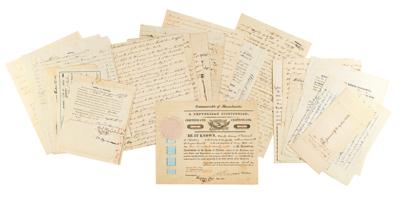 Archive of 26 documents related "A Republican Institution in the Town of Boston," dated from 1818 to 1892, including two early documents signed by Henry Dearborn as president of the organization.

This interesting archive of materials relates to "A Republican Institution in the Town of Boston." Chartered in February 1819, the Institution's purpose was to promote political thought and discussion. The organizers insisted that it was "absolutely necessary that the Republicans of the Town of Boston should be possessed of some respectable building wherein they may meet together to transact their business, and also a place to receive their Brethren from all parts of the Union." To acquire a building, they agreed to sell four hundred shares in the Institution for $25 each, and one person could purchase only up to four shares.

The Republicans were opposed to the Federalists and originally favored a strict construction of the Constitution and were jealous of the rights of the states. At the time A Republican Institution was founded, their candidate James Monroe was President of the United States, and Republicans had a majority in both houses of Congress. However, in Massachusetts, Federalists had control of state government under Governor John Brooks. In 1824 the Institution began to refund to members the amounts they had paid if they wished to withdraw, and the majority did, greatly reducing the membership. In 1893, A Republican Institution had sixty-three members, one of whom had been a member since 1841, but most of whom had joined in the 1880s or 1890s.

The first president of A Republican Institution was General Henry Dearborn, a veteran of both the Revolutionary War and the War of 1812, the fifth Secretary of War of the United States from 1801 to 1809, and the Senior Officer of the United States Army from 1812 to 1815. This archive includes two early documents signed by Dearborn as president.

--P. P. F. Degrand, Manuscript Document Signed, Resolutions, n.d., ca. 1818. 2 pp., 7.25 x 12.25, in part: "The Committee to whom was referred the subject of a Constitution for the Republican Institution beg leave to Report, that they have given due consideration to the business for which they were appointed, and in their opinion it will require considerable time to accomplish an instrument of so much importance. And as it is necessary to take some immediate measures for the collection of the Instalments, they take the liberty to submit for your consideration the following Resolutions"
[6 resolutions, all accepted.]

--Copy of A. Dunlop letter giving legal opinion, October 20, 1823. 2 pp., 7.75 x 12.75, in part: "I am of opinion that the provision in the 12th article of the Bye Laws is void, and that the only mode in which delinquent subscribers can be compelled to pay Instalments due is by actions against them. The usual mode of compelling payments of instalments is by a provision in the Charter of incorporation authorizing the sale of shares and this is clearly good, but in the charter of the Institution there is no such provision. Of course if the Subscribers are bound to pay their Instalments, they are debtors to the Corporation & may be sued."

--Jonathan Simonds and J. H. Thayer, Manuscript Document Signed, Report of Audit of Accounts of William B. Bradford, Treasurer, November 12, 1828. 2 pp., 8 x 9.75, in part: "Your Committee are compelled further to state that the late Treasurer refuses to pay over the funds of the Institution to his Successor in office, unless your committee will allow a compensation for time devoted to paying off those members who withdrew, between the 3d August & 30th Septr 1826, a claim, that your Committee consider, they were not only unauthorized to concede, But contrary likewise to the By-laws of the Institution."

--Manuscript Document, Resolution on Death of John W. Cumings, March 4, 1892. 2 pp., 8 x 10, in part: "His long service in the management of our Institution made his relation with its members a very close one and endeared him to all our hearts. In losing him we have lost a wise adviser and a warm friend."