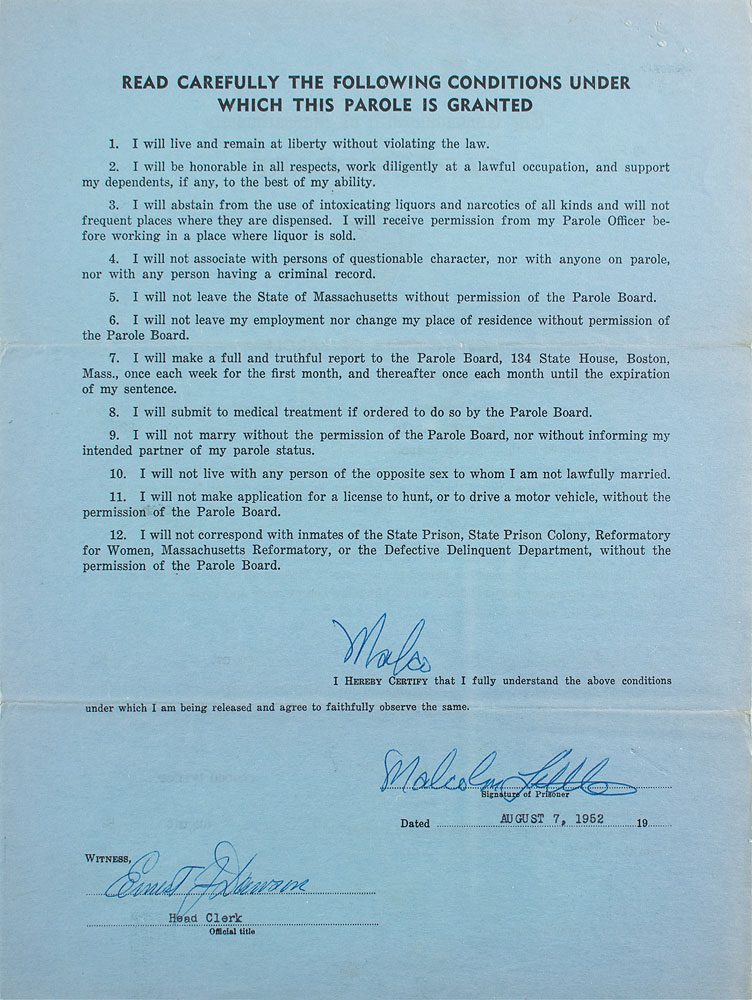 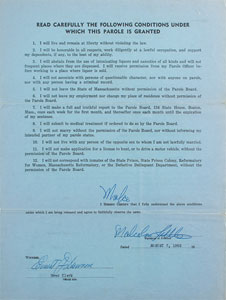 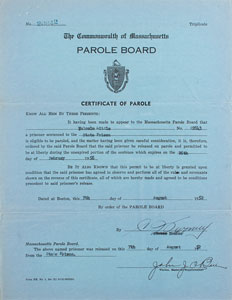 DS, signed “Malcolm Little,” one page both sides, 8.5 x 11, August 7, 1952. A certificate of parole from the Commonwealth of Massachusetts, issued as parole triplicate No. 20842, which reads, in part: "It having been made to appear to the Massachusetts Parole Board that Malcolm Little, No. 22843, a prisoner sentenced to the State Prison is eligible to be paroled, and the matter having been given careful consideration, it is, therefore, ordered by the said Parole Board that the said prisoner be released on parole and permitted to be at liberty during the unexpired portion of the sentence which expires on the 26th day of February 1956. Be it also know that this permit to be at liberty is granted upon condition that the said prisoner has agreed to observe and perform all of the rules and covenants shown on the reverse of this certificate, all of which are hereby made and agreed to be conditions precedent to said prisoner's release…The above named prisoner was released on this 7th day of August 1952, from the State Prison." Signed on the reverse in blue ballpoint, "Malcolm Little," who has mistakenly added a partial signature above. In fine condition.

Malcolm Little was found guilty of larceny and breaking and entering in 1946, and began serving his eight-to-ten year sentence at Charlestown State Prison in February. He made efforts to reform and educate himself while there, and with his sister Ella began a letter-writing campaign in hopes of getting transferred to the Norfolk Prison Colony. He ultimately found success, and was transferred to Norfolk on March 31, 1948. In The Autobiography of Malcolm X, he described the colony as 'comparatively, a heaven, in many respects,' observing: 'Norfolk Prison Colony represented the most enlightened form of prison that I have ever heard of. In place of the atmosphere of malicious gossip, perversion, grafting, hateful guards, there was more relative ‘culture,’ as ‘culture’ is interpreted in prisons. A high percentage of the Norfolk Prison Colony inmates went in for ‘intellectual’ things, group discussions, debates, and such.' He joined the weekly debate team, where he honed his oratorical skill, and devoted much of his time to studying in the prison library. Most importantly, it was during his sentence that Malcolm discovered the Nation of Islam. In August 1952, after seven years served, Malcolm Little left prison as Malcolm X, a devout member of the Nation of Islam and a committed disciple and pupil of Elijah Muhammad. A significant document that quite literally and figuratively represents the liberation of Malcolm Little.