The final letter from Cézanne, written three days before his death 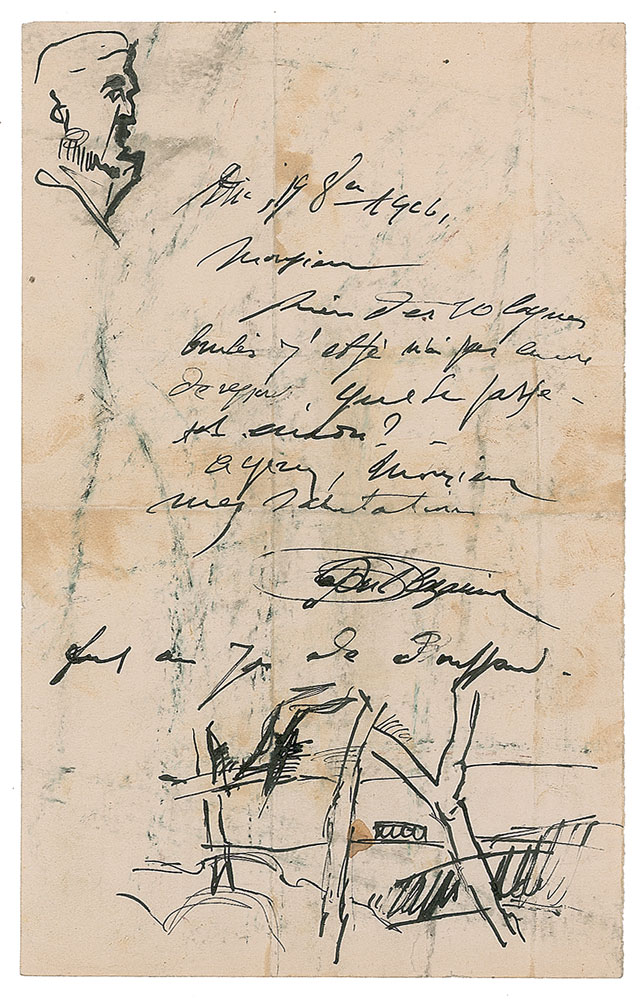 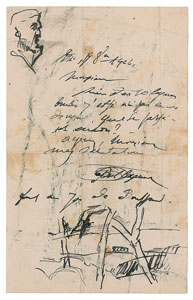 The final letter from Cézanne, written three days before his death

Extraordinary ALS in French from Paul Cézanne, written on October 19, 1906, just three days before his death at the age of 67, one page, 5.5 x 8.75, which boasts a pair of boldly penned original ink sketches to the top and bottom portions; the upper sketch appears to be a self-portrait in profile, and the lower, which bears a resemblance to that of his unfinished work ‘Les Grandes Baigneuses,’ or ‘The Bathers,’ seems to show leaning branches or fencing through which the observer can detect a small structure in the distance.

The letter, written from Aix and addressed to a color merchant, contains a request for 10 of some variety of lacquer (translated), "I have not yet received a response. What is going on? Sending you, sir, my regards." In very good condition, with intersecting folds and scattered staining and soiling.

The final letter published in Alex Danchev’s 2013 work The Letters of Paul Cézanne dates to two days prior on October 17, 1906. The note is addressed to the same color merchant and reads as follows: ‘A week has gone by since I asked you for ten burnt lakes no. 7, and I have had no reply. What is going on? A reply, and a speedy one, I beg you.’

Two days earlier on the 15th, Cézanne was caught in a downpour while working in a field between the Chemin des Lauves and the rugged Mont Sainte-Victoire Range. He continued undeterred for two hours before opting to return home, eventually collapsing on a country road and being discovered by a passing cart. The two riders, who identified the unconscious man as Cézanne, quickly delivered him into the care of his housekeeper, Madame Bremond. Upon awakening, Cézanne, eager to complete his rain-delayed work, purportedly inquired if the sun had resumed shining. Stricken with pneumonia, he attempted to paint the following day, but fainted in the process and was placed in bed, the location from which this letter was ostensibly written. A somber note from the fading artist, and very possibly the last letter to come from the hand of Cézanne.