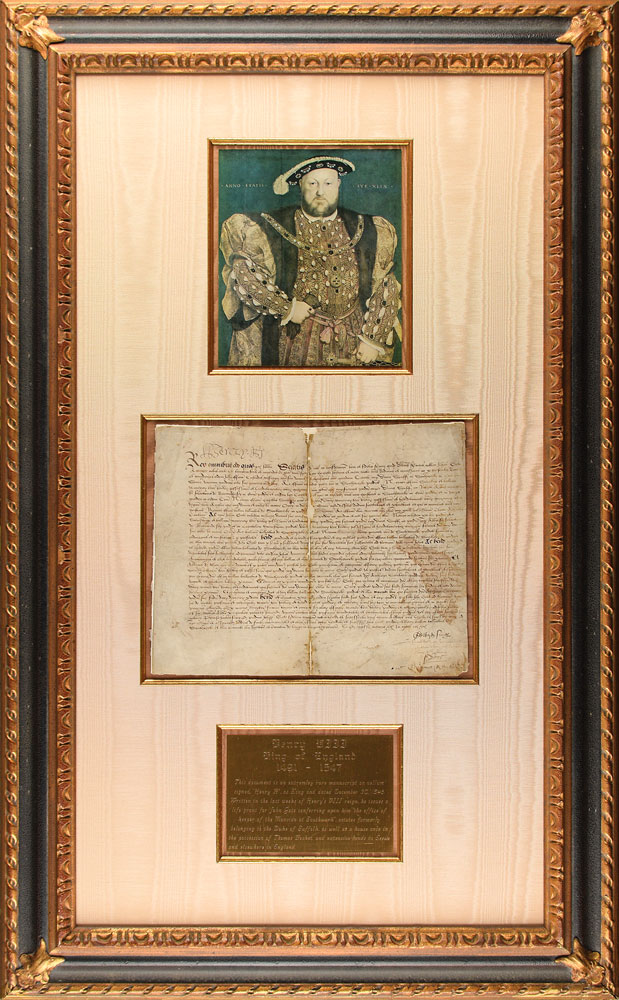 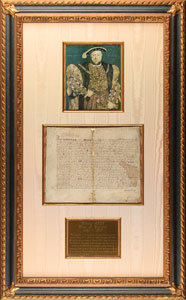 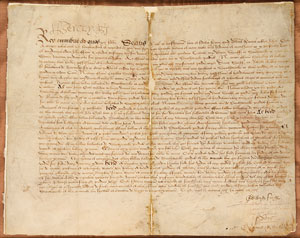 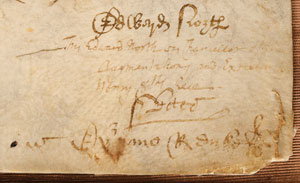 King of England from 1509 until his death in 1547, remembered for his role in the English Reformation, his six marriages (and his beheaded ex-wives), and his radical changes to the English Constitution. Extremely rare vellum manuscript DS, signed “Henry R,” one page, 13 x 10.5, December 30, 1546. In the last weeks of his reign, King Henry VIII issues a life grant for John Gate "of the office of Keeper of the Mansion in Southwarke," formerly belonging to Charles Brandon, Duke of Suffolk. Also conferred upon him are the estates formerly belonging to the Duke of Suffolk, as well as the house once in possession of Thomas Becket, and extensive lands in Essex and elsewhere in England. Signed at the head by King Henry VIII, and countersigned at the foot by Edward North, Chancellor of the Court of Augmentations. Impressively mounted, matted in silk, and framed with a portrait and descriptive plaque to an overall size of 26.5 x 42.5. In very good condition, with soiling and staining, and paper loss and separation along the central vertical fold (expertly reinforced on the reverse); the signature is clean and unaffected. The document was professionally conserved by J. Baldwin Conservation. Also accompanied by a vellum leaf, now separated from the main document, with later annotations on the history of the piece.

The "Mansion in Southwarke," also known as Suffolk Place, was originally built in the 15th century and rebuilt in 1522 in a fine Renaissance style by Charles Brandon, 1st Duke of Suffolk. In 1536, he exchanged it with King Henry VIII for Norwich Place on the Strand. This document holds a special significance, as it marks the same day that the final revision to the will of King Henry VIII was made. The will was signed using the 'dry stamp,' under the control of Anthony Denny and John Gates, rather than the king's own manual signature, leading some to question its authenticity. The debate about whether the king was physically well enough to sign at the time seems put to rest by the presence of his 'sign-manual,' or personal signature, on this document from the same date. Since he was indeed capable of signing, speculation will continue about the reasons for using the 'dry stamp' to finalize his will—a significant constitutional document that had implications on the line of succession in the House of Tudor.