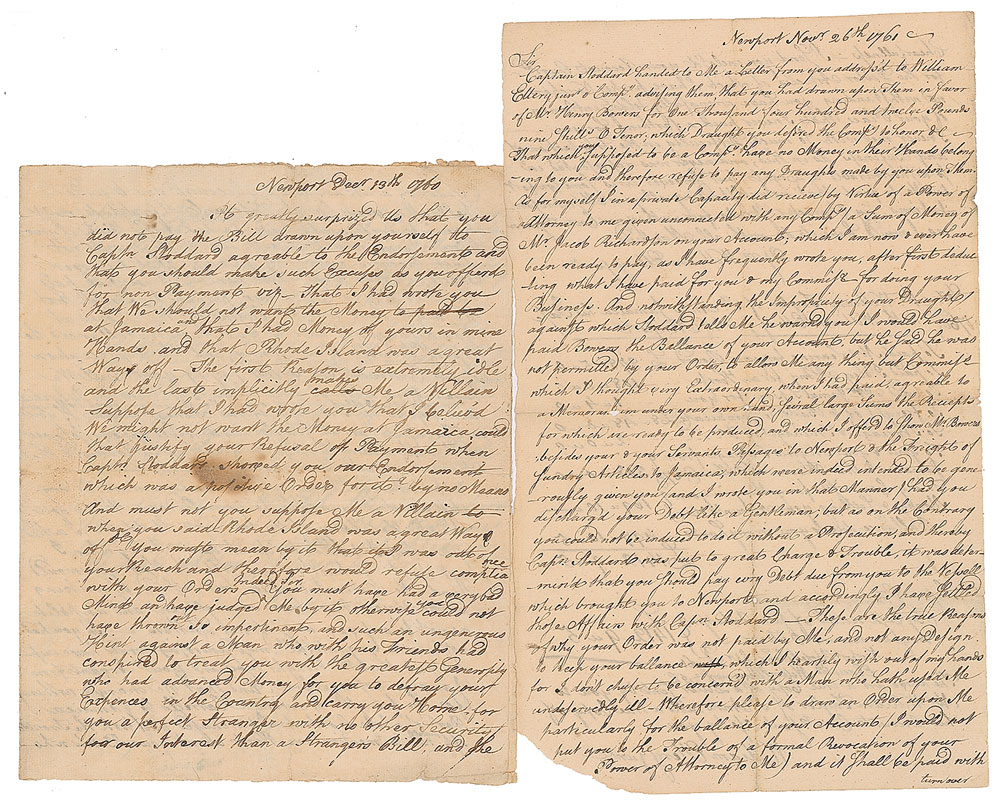 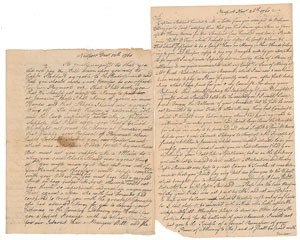 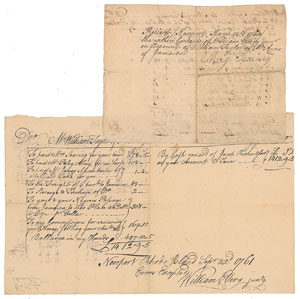 Group lot of four items signed by Rhode Island signer William Ellery, which includes two autograph letters and two autograph documents, dated between 1759 and 1761, all of which relate to a debt owed to Ellery by William Taylor of St. Ann's, Jamaica. The lot includes: a manuscript bill for board, horse-keeping, and laundry services due from Taylor to Mary Searing, 7.5 x 5.75, dated September and October [1759], with reverse bearing a statement in the hand of Ellery dated March 18, 1760, who adds his signature in the third person; an ALS, three pages on two adjoining sheets, 7.5 x 9.5, December 13, 1760, written from Newport, Ellery rather angrily denouncing Taylor's excuses for not paying his bill, noting that “Obligations you are Under to Us and your Duty in order that you may retrieve your Character and appear in the Light of an honest Man”; a manuscript document signed twice "William Ellery junr," 11.75 x 7.5, dated September 22, 1761, which details Taylor's robust bill of 1412 pounds; and an ALS, one page both sides, 7.25 x 11.75, November 26, 1761, consisting of a more detailed demand for payment of the above bill, in part: “I never met with so much Difficulty in the Transaction of any Business as in this, and never was represented in so dishonorable a Light; but however it is some Comfort to Me to find notwithstanding all your Misrepresentations, my Character stands fair with your Countrymen as I would have it do with all Mankind.” Also included is a manuscript receipt in another hand for payment received from Ellery for Taylor's horse-keeping and 2 "Dolphins" of cheese, dated December 31, 1759. In overall fine condition. An exceptional little archive that offers an early glimpse into Ellery’s life as a 34-year-old Newport merchant some 15 years before he signed the Declaration of Independence; on August 2, 1776, Ellery seated himself next to the Second Continental Congress' secretary Charles Thompson in order to witness the expression of each man as he signed what Benjamin Franklin said would most assuredly be their death warrant. Ellery remarked that he observed ‘undaunted resolution in every countenance.’