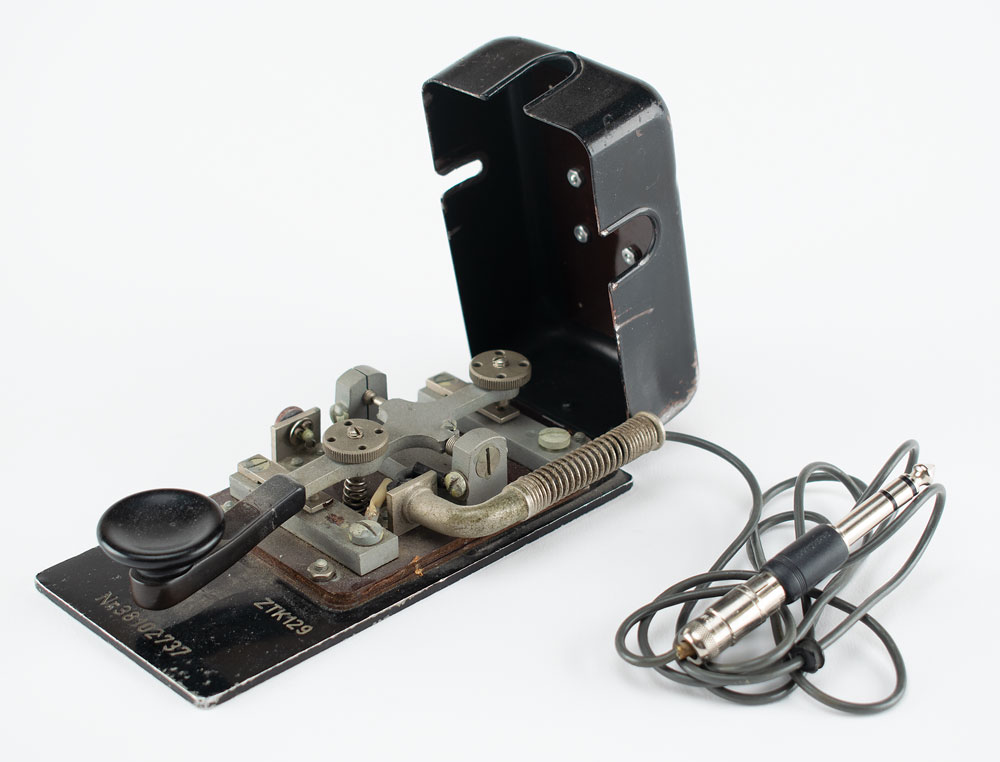 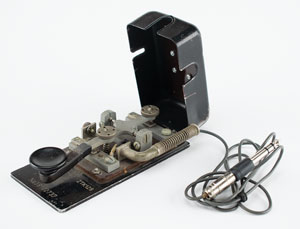 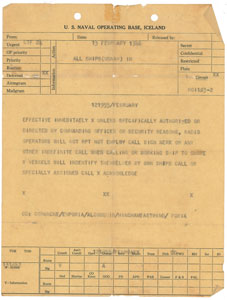 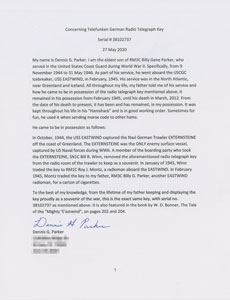 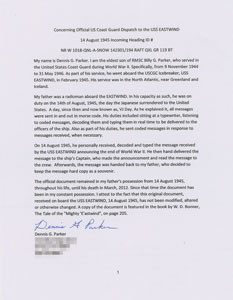 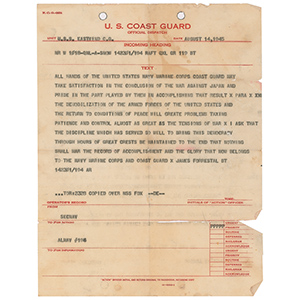 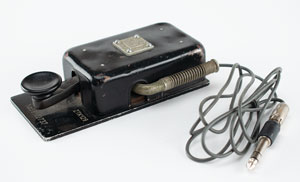 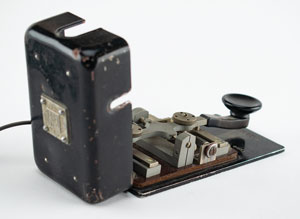 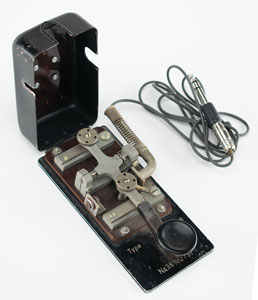 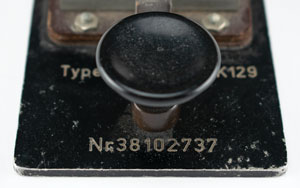 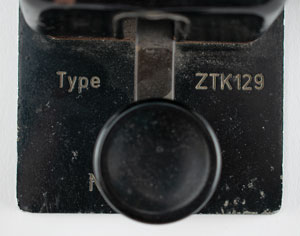 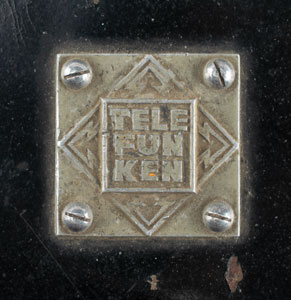 Historic pairing of World War II items—a telegraph key recovered from the captured German trawler Externsteine in 1944, and an official Coast Guard 'VJ Day' dispatch from August 14, 1945—originating from the collection of RM3C Billy Gene Parker, who served on the USCGC Icebreaker Eastwind in February 1945. In October 1944, the Eastwind had captured German trawler Externsteine off the coast of Greenland; this was the only enemy surface vessel captured by US naval forces during World War II.

The German Telefunken telegraph key recovered from the Externsteine measures 2.75″ x 5.5″ x 1.5″, and is marked "Type ZTK129, Nr 38102737." The cable has been modified to use an RCA plug, and includes a 1/4″ adapter. A later "Billy Parker, 45-46" label has been applied to the bottom of the key. Accompanied by a letter of provenance from the son of Billy Parker, in part: "In October, 1944, the USS EASTWIND captured the Nazi German Trawler EXTERNSTEINE off the coast of Greenland. The EXTERNSTEINE was the ONLY enemy surface vessel, captured by US Naval forces during WWII. A member of the boarding party who took the EXTERNSTEINE, SN1C Bill B. Winn, removed the aforementioned radio telegraph key from the radio room of the trawler to keep as a souvenir. In January of 1945, Winn traded the key to RM1C Roy J. Montz, a radioman aboard the EASTWIND. In February 1945, Montz traded the key to my father, RM3C Billy G. Parker, another EASTWIND radioman, for a carton of cigarettes."

The official US Coast Guard dispatch is one page, 8 x 10.25, issued by Secretary of the Navy James Forrestal and received by the USS Eastwind on August 14, 1945. In part: "All hands of the United States Navy Marine Corps Coast Guard may take satisfaction in the conclusion of the war against Japan and pride in the part played by them in accomplishing that result. The demobilization of the armed forces of the United States and the return to conditions of peace will create problems taxing patience and control almost as great as the tensions of war. I ask that the discipline which has served so well to bring this democracy through hours of great crests [sic: crisis] be maintained to the end that nothing shall mar the record of accomplishment and the glory that now belongs to the Navy Marine Corps and Coast Guard."

The dispatch is also accompanied by a letter of provenance from Billy Parker's son, in part: "My father was a radioman aboard the EASTWIND. In his capacity as such, he was on duty on the 14th of August, 1945, the day the Japanese surrendered to the United States. A day, since then and now known as, VJ Day. As he explained it, all messages were sent in and out in morse code. His duties included sitting at a typewriter, listening to coded messages, decoding them and typing them in real time to be delivered to the officers of the ship. Also as part of his duties, he sent coded messages in response to messages received, when necessary. On 14 August 1945, he personally received, decoded and typed the message received by the USS EASTWIND announcing the end of World War II. He then hand delivered the message to the ship's Captain, who made the announcement and read the message to the crew. Afterwards, the message was handed back to my father, who decided to keep the message hard copy as a souvenir."

In very good to fine condition, with light staining, creasing, and a tear to the dispatch. Includes an additional dispatch on "US Naval Operating Base, Iceland," on February 13, 1946, directing operators not to use call signs to identify their ships.