Accepting an ivory cane for his campaign against slavery 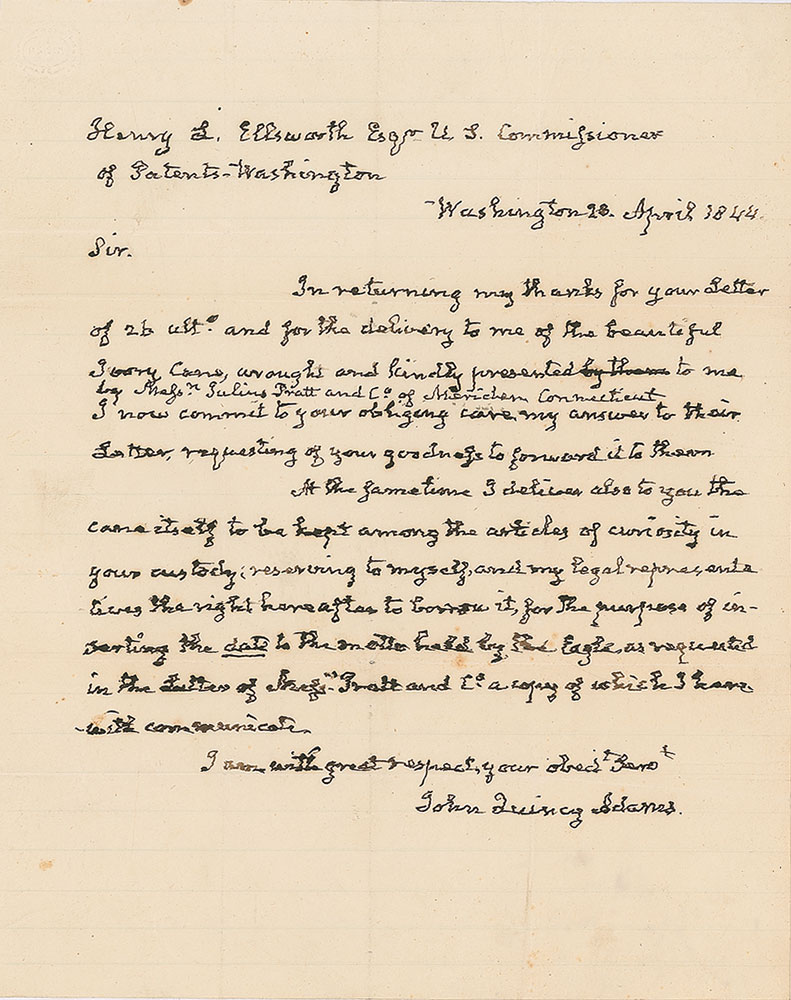 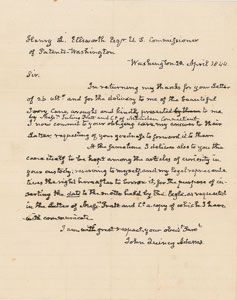 Accepting an ivory cane for his campaign against slavery

ALS, one page, 7.75 x 9.75, April 28, 1844. Letter to U.S. Commissioner of Patents Henry Leavitt Ellsworth, accepting the famous ivory cane that was presented to him in honor of his campaign to defend the right to protest slavery and end the U.S. House of Representatives Gag Rule. In full: "In returning my thanks for your Letter of 26 ulto. and for the delivery to me of the beautiful Ivory Cane, brought and kindly presented to me by Messr. Julius Pratt and Co. of Meriden Connecticut. I now commit to your obliging care my answer to their Letter, requesting of your goodness to forward it to them. At the same time I deliver also to you the cane itself to be kept among the articles of curiosity in your custody; reserving to myself, and my legal representatives the right hereafter to borrow it, for the purpose of inserting the date to the matter held by the Eagle as requested in the Letter of Messr. Pratt and Co. a copy of which I herewith communicate." In fine condition, with multiple intersecting folds.

The Gag rule prevented the discussion of the abolition of slavery in the U.S. House of Representatives in 1836. John Quincy Adams led the campaign in repealing the Gag Rule in 1844. Julius Pratt and Company, the country’s leading importers of ivory and outspoken abolitionists, gifted the ivory cane through Henry Leavitt Ellsworth to Adams for his successful efforts. Upon Adams’ death, he bequeathed the cane to the U.S. Patent Office and it currently stays on exhibit at the Capitol by the Smithsonian.

The present letter and ivory cane is referenced a great deal in literature, including John Quincy Adams’ Memoirs: Volume XII: 'I answered the letter of Julius Pratt & Co., of Meriden, Connecticut, which accompanied their present of an ivory cane to me. I answered also the letter of Henry L. Ellsworth, Commissioner of Pensions, with which he delivered the cane to me. I took these letters, together with a copy of the letter from Pratt & Co., and the cane, leaving them all with Mr. Ellsworth; the cane to be kept in custody of the Commissioner among the curiosities of the office, until the right of petition shall be restored by the extinction of the gag-rule in the House of Representatives. The donors of the cane request me, when that event shall occur, to have the date of it added to the motto held by the eagle on the top of the cane. In depositing the cane at the Patent Office, I reserved to myself, and my legal representatives, the right to borrow it hereafter, to have the date added to the motto, when the fact shall be realized; and then, that the cane be finally deposited in the office. Mr. Goodwin, of Hartford, was at the office with Mr. Ellsworth, who promised to forward my letter to Pratt & Co., and to keep the cane safely.'