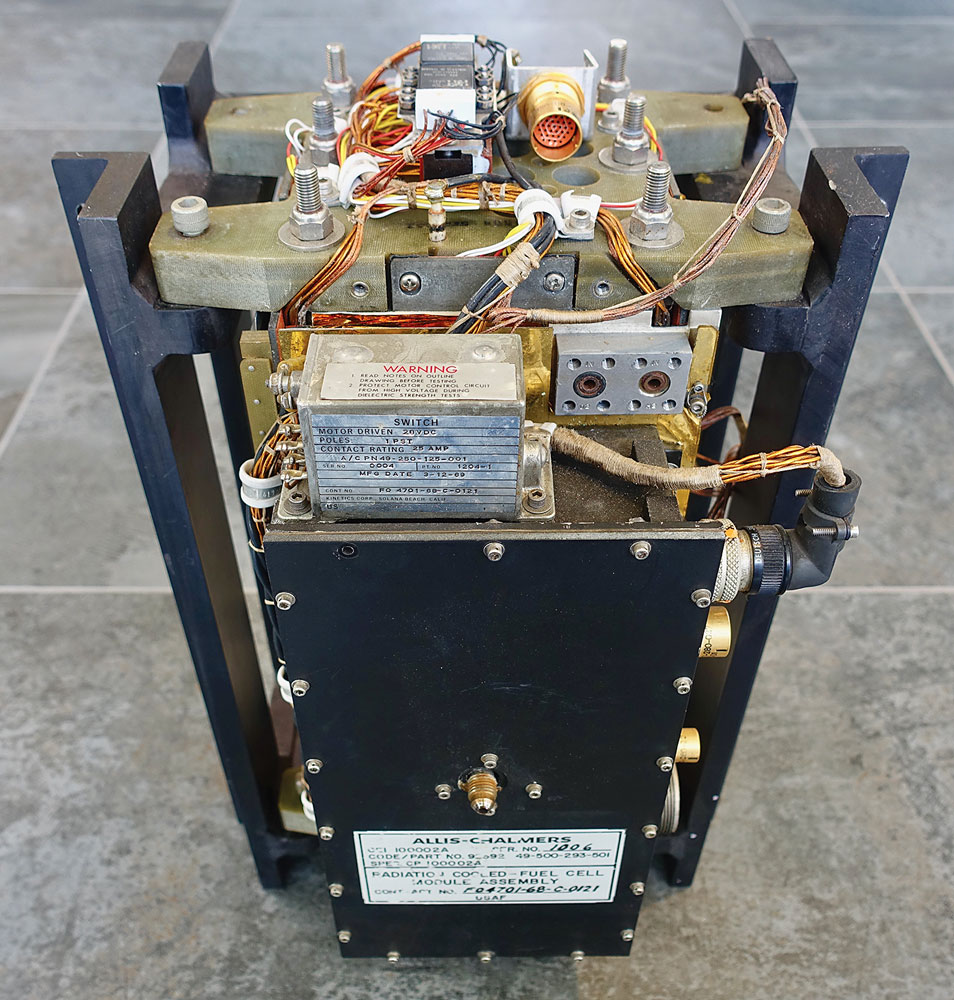 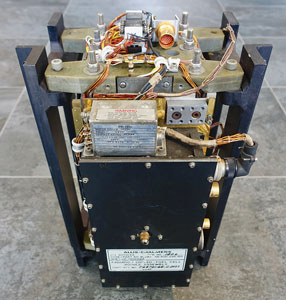 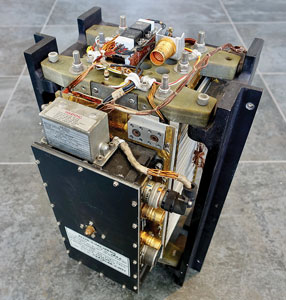 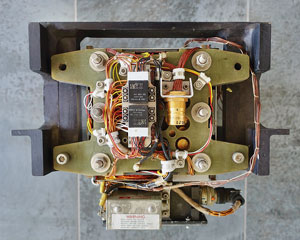 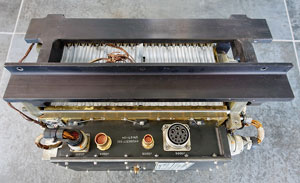 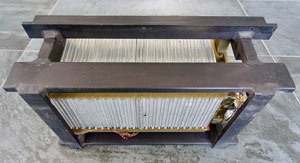 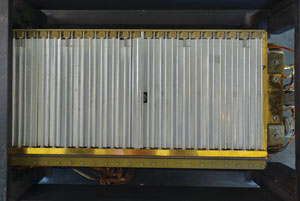 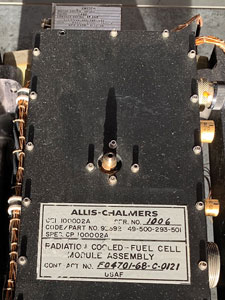 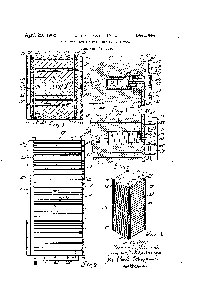 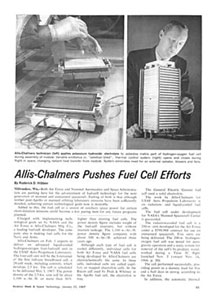 Allis-Chalmers Radiation Cooled Fuel Cell Module Assembly developed for unmanned NRO and USAF Spacecraft, weighing 50 lbs and measuring approximately 17.5″ x 12″ x 10.5″ in its handling frame, with identification plate reading: "Allis-Chalmers, CEI 100002A, Ser. No. 1006, Code/Part No. 92592 49-500-293-501, Spec CP 100002A, Radiation Cooled Fuel Cell Module Assembly, Contract No. F04701-68-C-0121, USAF." This contract covers the transfer of 'approximately $250,000 of special fuel cell hardware' to the Air Force Aero Propulsion Laboratory (AFAPL) Fuel Cell Facility at Wright Patterson AFB from the NRO’s Air Force Office of Special Projects (SAFSP SP-6 R&D). The design requirement for this fuel cell assembly was simplicity—it eliminated an external radiator, blower, and fans, instead using louvers to regulate temperature. This novel design was covered by an Allis-Chalmers patent. The 28 cells in each module combine to operate between 22 volts and 30 volts, and are wired in series for redundancy in case one fails. In very good to fine condition. This piece will be crated and shipped from California; the buyer is responsible for all associated costs.

Further details are offered in the Congressional Record for the U.S. Senate, April 4, 1967: 'The radiation-cooled fuel cell is a 200-W unit developed for the Air Force under a $598,968 contract for use on unmanned space craft. Five units are being delivered. The 200-W, hydrogen-oxygen fuel cell was tested for zero-gravity operation and a static system for removal of the cell's by-product, water, worked during a Titan 3C flight launched Nov. 3, 1966. The cell performed successfully, providing power to a dummy load for five and a half days in zero-g, according to the Air Force. In addition, the automatic thermal control system on the cell maintained it at a constant 200F temperature despite thermal cycling caused by the earth's dark-light side.

The radiation-cooled fuel cell developed for unmanned satellites for the Air Force by Allis-Chalmers weighs 30 lbs. Design requirement was simplicity. This is achieved by eliminating an external radiator, blowers and fans. Each fuel-cell module is self-sufficient, requiring no auxiliary subsystems other than the reactants supply. The cell is constructed so that low-emittance outer louvers cover completely high emittance surfaces of the fuel cell. During use in orbit, the louvers open and close like Venetian blinds, changing the radiant heat transfer from the module. The louvers are Operated by thermal actuator. As the temperature of the module increases, the louvers expose more and more of the high-emittance inner surface. When the temperature falls, the louvers close, reducing the amount of surface exposed and conserving heat generated within the module to maintain the desired operating temperature range of 190F to 220F. The hydrogen anode of the cell contains a platinum catalyst, while the oxygen cathode uses a silver one. The water removal plate, the oxygen and hydrogen plate are gold and nickel-plated magnesium.

The 30-lb., 200-W Allis-Chalmers radiation-cooled fuel cell is 15-3/4 in high and 7 x 7 in. in cross-section. The 28 cells in each module combine to operate between 22 v. and 30 v. Redundancy in the fuel cell in the event one individual cell fails is accomplished by series-parallel electrical connections.

In the 30-day to possibly 90-day mission time envisioned for the fuel cell, representative curves usually show large spikes or peak power periods lasting for short periods, with relatively medium constant power drains between the peaks. Average power consumption on a representative mission is usually about one-half peak power onboard. For these reasons a modular fuel-cell arrangement in which one set of fuel cells takes care of the spikes or high-power consumption periods is favored chiefly for its inherent reliability.