Amazing Apollo 16 'spare' Core Tube Cap—"One of only a handful of objects on earth that was ever driven aboard a car on the Moon!" 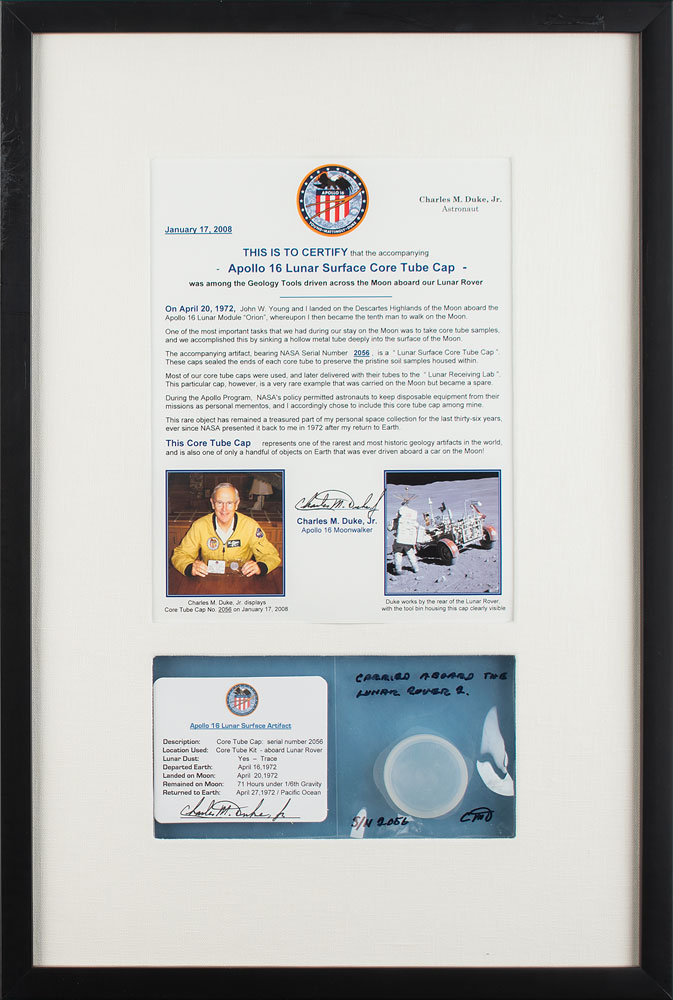 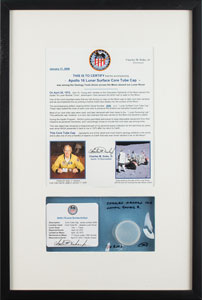 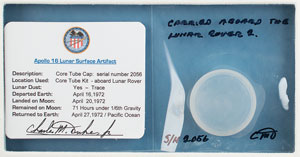 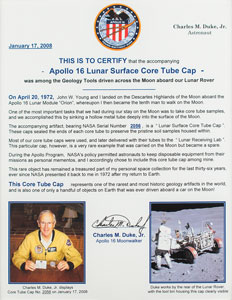 Amazing Apollo 16 'spare' Core Tube Cap—"One of only a handful of objects on earth that was ever driven aboard a car on the Moon!"

Charlie Duke’s flown ‘Core Tube Cap’ carried to the lunar surface during the Apollo 16 mission. The clear plastic cap, 2″ in diameter, marked “S/N 2056” on the top, traveled to the moon inside the Modularized Equipment Stowage Assembly (MESA) of the Lunar Module (LM) Orion. After successful lunar touchdown, the cap was then secured within the Lunar Hand Tool Carrier attached to the rear of the Lunar Rover, where it would remain for all three of the mission’s lunar surface EVAs, amounting to over 20 hours of otherworldly exploration. The cap is housed in a transparent pouch initialed and flight-certified in black felt tip by LM Pilot Duke, “Carried aboard the Lunar Rover 2, S/N2056, CMD,” and is joined by an “Apollo 16 Lunar Surface Artifact” card, signed in black felt tip, “Charles M. Duke, Jr.,” which lists information relative to cap “2056,” in particular the presence of “Trace” lunar dust and its full lunar residency of 71 hours.

Also included with the cap is signed certificate of authenticity dated January 17, 2008, which features an image of Duke holding the cap and artifact card, and states: “This is to certify that the accompanying Apollo 16 Lunar Surface Core Tube Cap was among the Geology Tools driven across the Moon aboard our Lunar Rover…One of the most important tasks that we had during our stay on the Moon was to take core tube samples, and we accomplished this by sinking a hollow metal tube deeply into the surface of the Moon. The accompanying artifact, bearing NASA Serial Number 2056, is a ‘Lunar Surface Core Tube Cap.’ These caps sealed the ends of each core tube to preserve the pristine soil samples housed within. Most of our core tube caps were used, and later delivered with their tubes to the ‘Lunar Receiving Lab.’ This particular cap, however, is a very rare example that was carried on the Moon but became a spare…This rare object has remained a treasured part of my personal space collection for the last thirty-six years, ever since NASA presented it back to me in 1972 after my return to Earth. This Core Tube Cap represents one of the rarest and most historic geology artifacts in the world, and is also one of only a handful of objects on earth that was ever driven aboard a car on the Moon!” The cap, card, and certificate are all archivally cloth-matted and framed to an overall size of 15.5 x 23. In fine condition.