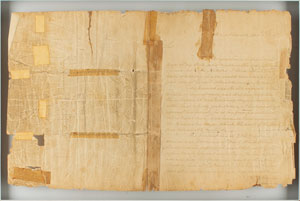 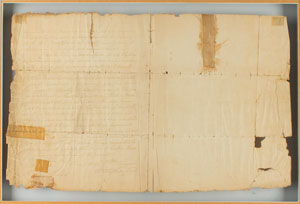 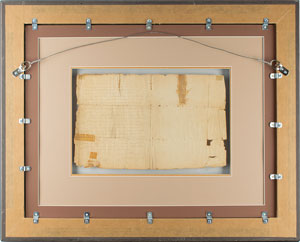 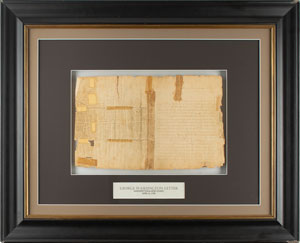 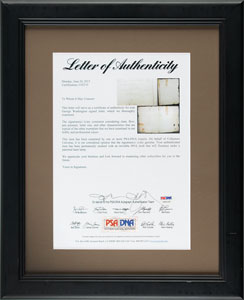 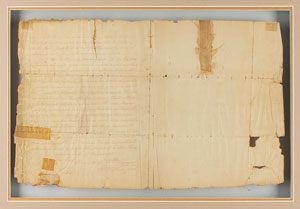 ALS signed “Go: Washington,” one page both sides, 7.75 x 10, April 8, 1798. Letter to inventor Oliver Evans, who had introduced some improvements to his mill at Mount Vernon in the early 1790s. In full: "As you have some knowledge of my Mill: and much in the way of being acquainted with Millers, I have taken the liberty of asking, if you could recommend a good one, of honest sober character, to me.

My present one stands engaged to the middle of August only, and it is not probable the agreement will continue longer: because, altho’ he is a pretty good Miller, & I have no charge against his honesty, he is far from being an active & industrious man; and because he is endeavouring to raise his wages, which the work of the Mill will not enable me to do.

His present lay is $166⅔ dollars pr annum and provision of Meat, Bread & Fish found him in sufficient quantities, and by specification, to prevent disputes. He has a Cow allowed him for Milk, and wood without restriction, laid at his door. His house, Garden and other conveniences you will recollect are adequate to a Man in his line; and a Coopers shop at hand, and a considerable Distillery at the spot (but this is not mentioned by way of inducement) has just commenced work.

With this information, if, on the terms beforementioned, you could recommend a character whom you conceive would suit me, it would be doing me a kindness. A Married man with a small family would be prefered; and it would be needless to observe, to you, how essential honesty, sobriety & industry are, in the person employed. It is not my wish that a Miller should be absolutely engaged. The one I now have will remain until the Middle of August; but I am desirous of knowing, & as soon as enquiry can be made, if a good one could be had, on what terms, and whether he would contract to be here by the time abovementioned.

This letter will go under cover to Colo. Clemt Biddle of Phila. whom I have requested to converse with you on the subject matter there of, and to inform me of the result." Addressed on the integral leaf in Washington's hand, "Mr. Oliver Evans in Philadelphia, To the care of Colo. Biddle in that City." Impressively matted and framed with glass on both sides to an overall size of 31.5 x 25.5. In good condition, with tears, stains, soiling, overall creasing, and areas of paper loss (primarily to the edges, some of which exhibit very old tape repairs), as well as chips to corner of the frame. Accompanied by a full letter of authenticity from PSA/DNA, matted and framed to an overall size of 13.5 x 16.5.

The recipient of this letter, Oliver Evans, was a notable early American inventor who made pioneering contributions in the fields of automation, materials handling, and steam power. He spent much of the 1780s developing and improving an automatic flour mill, a design first adopted along Delaware's Brandywine River. Washington, having observed the mills in action while visiting Joseph Tatnall in Brandywine Village in 1790 to pay respects for services rendered during the Revolution, recruited Evans to convert his Mount Vernon gristmill to the new format. A fascinating letter associated with Washington's business at Mount Vernon.