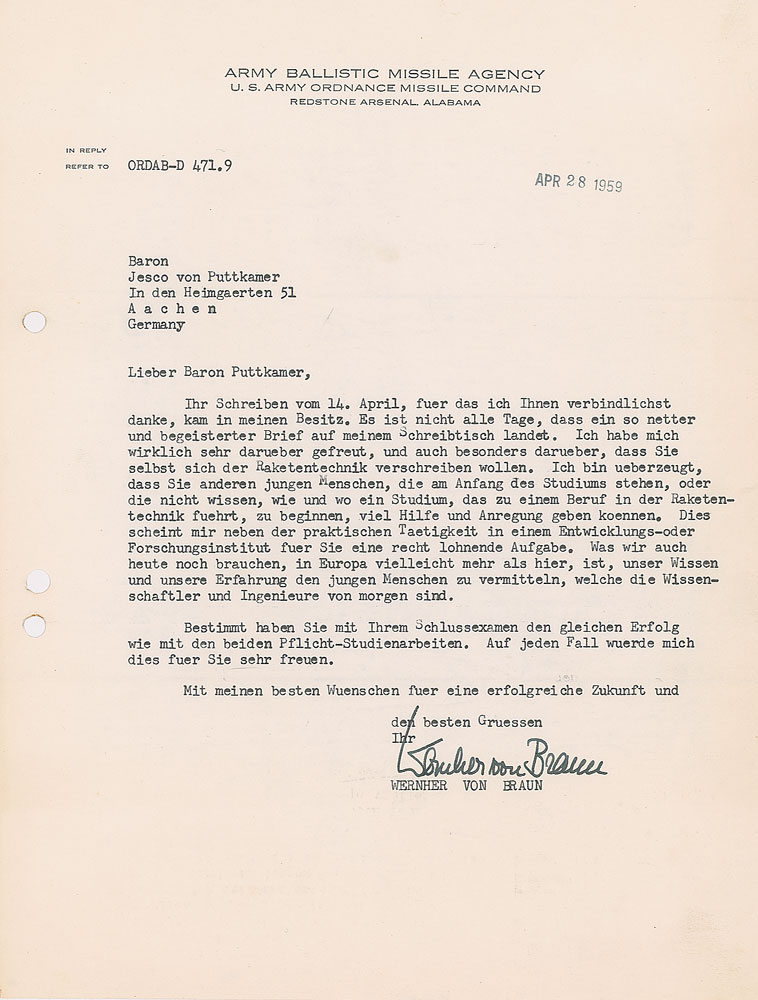 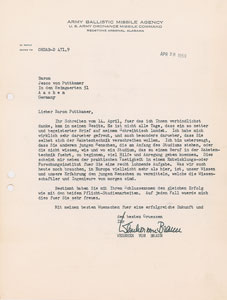 TLS in German, one page, 8 x 10.5, Army Ballistic Missile Agency, Redstone Arsenal, Alabama letterhead, April 28, 1959. Letter to Jesco von Puttkamer, a German-American aerospace engineer and senior NASA manager, with Von Braun mistakenly addressing Puttkamer as “Baron,” confusing him with his father of the same name. In full (translated): “Your letter of April 14th, for which I thank you most sincerely, came into my possession. It is not every day that such a nice and enthusiastic letter ends up on my desk. I was really happy about it, and especially that you wanted to commit yourself to rocket technology. I am convinced that you will be able to give a lot of help and inspiration to other young people who are just starting their studies or who do not know how and where to start a course that leads to a profession in rocket technology. In addition to the practical activity in a development or research institute, this seems to me a quite worthwhile task. What we still need today, perhaps more in Europe than here, is to convey our knowledge and experience to the young people who are the scientists and engineers of tomorrow. You will certainly have the same success with your final exam as with the two compulsory coursework. In any case, I would be very happy for you. With my best wishes for a successful future and best regards." In fine condition, with scattered light creasing, and file holes to the left edge. Accompanied by the original mailing envelope.

Jesco von Puttkamer (1933-2012) was born in Leipzig, the son of Baron Jesco von Puttkamer, a Nazi operative during WW2, who ran Hitler’s propaganda machine in the Far East and later moved to Canada after being imprisoned for his war crimes. Puttkamer (the son) earned a degree in mechanical engineering at Aachen Germany before von Braun brought him to Huntsville, Alabama in 1962, to work at the Marshall Space Flight Center as an engineer and program manager in charge of long-range planning of deep-space flights. Puttkamer was an ardent advocate of manned space exploration and SETI, the search for extraterrestrial intelligence. He worked with von Braun on the Saturn V rocket, which was used in the first moon landing of Apollo 11, and in 1974 he transferred to NASA Headquarters in Washington and became a technical manager for the International Space Station. Also a science fiction writer, Puttkamer served as the technical advisor for Star Trek: The Motion Picture in 1979, and his novelette, The Sleeping God, was included in an anthology of works based on the series, Star Trek: The New Voyages 2.