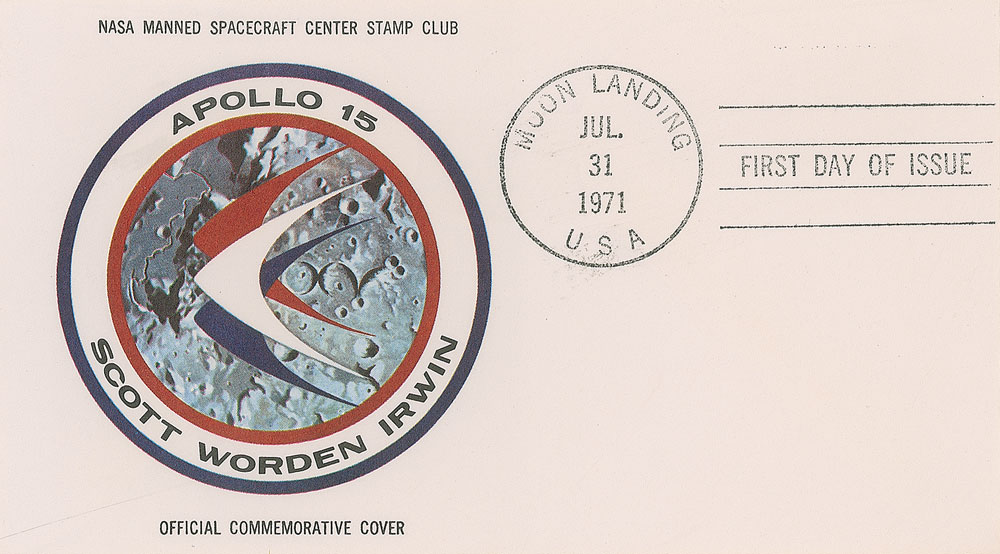 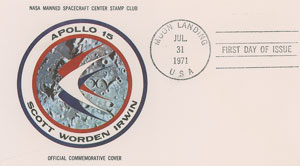 Extremely scarce NASA Manned Spacecraft Center Stamp Club commemorative cover with a color cachet of the Apollo 15 mission insignia, featuring a first day of issue trial cancellation for Apollo 15's second day of lunar exploration, reading: "Moon Landing, Jul. 31, 1971, U.S.A." The cover was created before the flight by Dr. Matthew Radnofsky. In fine condition. This is one of three known trial cancellations with this date.

The U.S. Postal Service had two postmarks with an adjustable date made for Apollo 15 and sent them to the Moon. Before the flight, Matthew Radnofsky made a few trial cancellations of both with the following date settings:

On August 2, 1972, CDR Dave Scott opened the very first post office on the moon and cancelled an envelope at the request of the U.S. Postal Service. Like an unused reserve envelope, it is stamped with a hand-perforated proof of the new 8-cent dual postmark 'A Decade of Achievement,' meaning ten years of success in space. Dave Scott decided to use the “United States on the Moon” postmark. The stamp impression was weak, however. He thus imprinted a second—albeit not better—postmark below. This ceremony was broadcast live on TV. At the same time on Earth, these new stamps were issued at post offices in Kennedy Space Center, Florida, in Houston, Texas, and in Huntsville, Alabama.