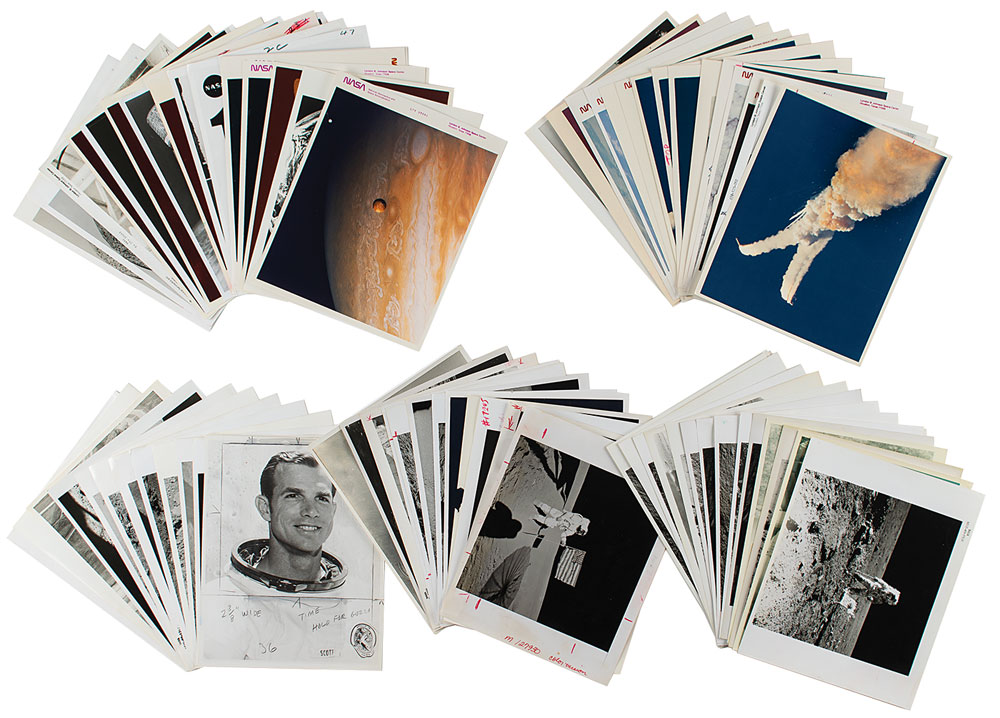 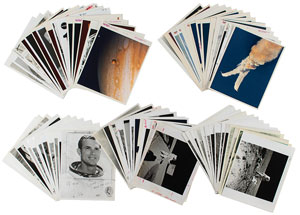 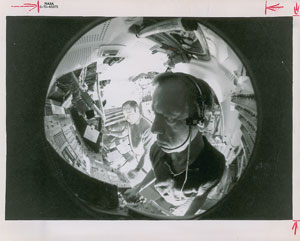 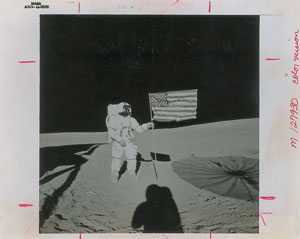 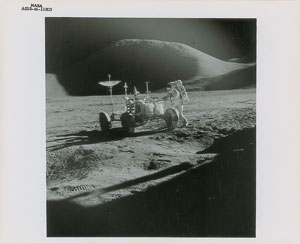 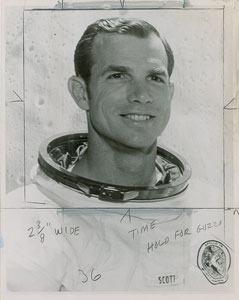 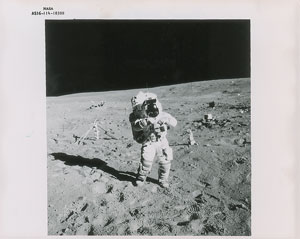 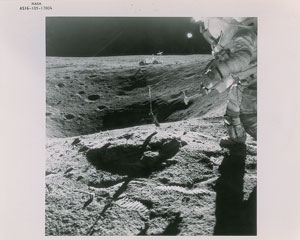 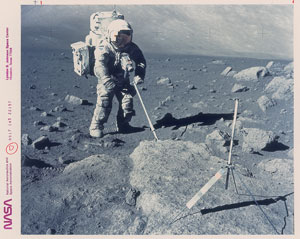 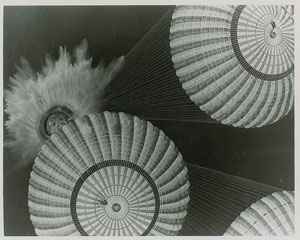 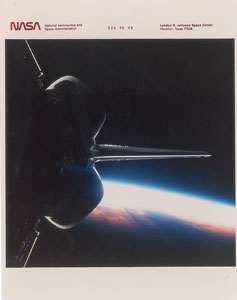 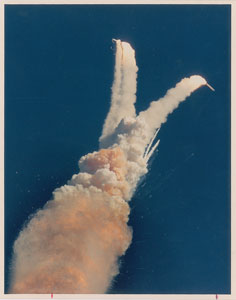 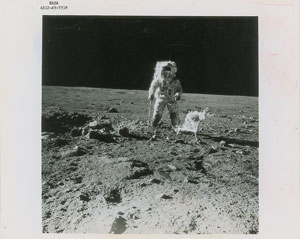 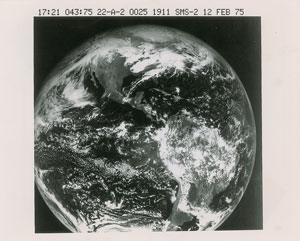 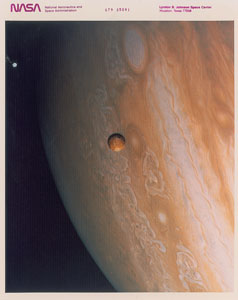 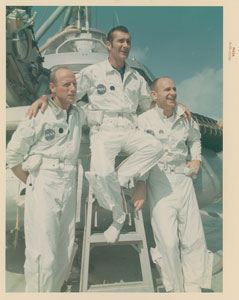 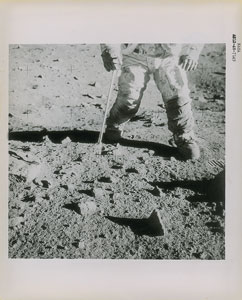 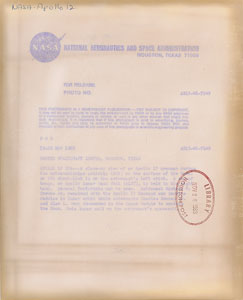 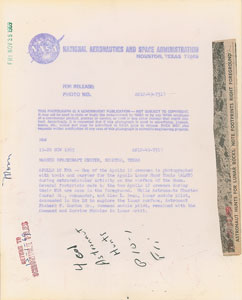 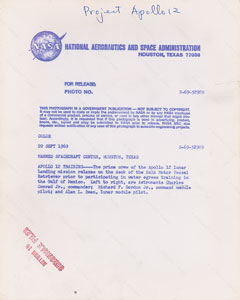 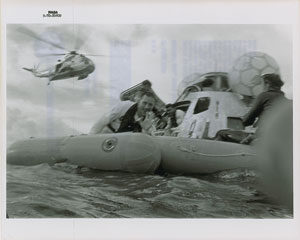 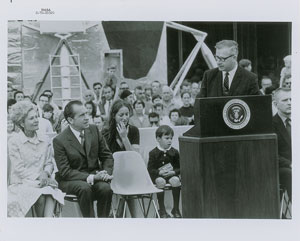 Collection of 87 vintage official NASA photos honoring Apollo missions 12-17 and the Space Shuttle program, glossy and silver gelatin, each approximately 8 x 10 or 10 x 8, with the large majority of the photos bearing NASA caption text, annotations, and press stamps to reverse.

Apollo 12 (19) — comprised of 15 black-numbered photos, two color red-numbered examples (both with “Kodak” watermarks), and two unnumbered, all with NASA caption text to reverse, with a total of 16 featuring either “Return to: Chronicle Files” or “Library, Houston Post” stamps. Image subjects consist mostly of EVA photos from the second manned lunar mission.

Apollo 13 (3) — all black-numbered photos with NASA caption text and notations to reverse. Image subjects include two from the recovery scene and one of President Nixon at the Manned Spacecraft Center to present the Presidential Medal of Freedom to the Apollo 13 Mission Operations Team.

Apollo 14 (12) — includes nine black-numbered examples; two of the unnumbered photos bear NASA caption text on the reverse, and the reverse of seven photos feature “Houston Chronicle Library,” “Return to: Chronicle Files,” or “Library, Houston, Texas” stamps. The majority of the photos are EVA images from the third moon-landing mission.

Apollo 15 (12) — includes ten black-numbered examples; the reverse of four photos have NASA caption text and nine have “Library, Houston Post” or “Return to: Chronicle Files” stamps. The majority of the photos are EVA images from the fourth moon-landing mission.

Apollo 16 (4) — group of four black-numbered photos, with one bearing NASA caption text to reverse, and two with “Library, Houston Post” or “Return to: Chronicle Files” stamps. Image subjects include: three lunar EVA experiments and the insignia for the fifth moon-landing mission.

Apollo 17 (2) — a color satin-finish red-numbered photo of Harrison Schmitt collecting lunar samples during an EVA, with NASA caption text, “This Paper Manufactured by Kodak” watermarks, and a “Library, Houston, Texas” stamp to reverse; and a glossy photo of the Apollo 17 splashdown in the Pacific Ocean, which bears NASA caption text to reverse.

Space Shuttle (15) — includes seven color red-numbered and one black-numbered examples, with the reverse of each photo bearing press labels or stamps and either NASA caption text or “Kodak” watermarks. Image subjects include: an EVA conducted by astronaut Sherwood C. Spring; the launch of an Earth Orbital Space Shuttle in December 1971; an aurora in the Southern Hemisphere as viewed during the STS-51-B mission; and six color photos of the tragic Challenger explosion of the STS-51-L mission.

Also included are 20 photos of various images and illustrations of celestial bodies and NASA satellites, with five color red-numbered and three black-numbered examples, and the reverse of every photo bearing either NASA caption text or “Kodak” watermarks; the reverse of five photos contain press stamps. Photos include images of Earth, Jupiter, Saturn, and Mars as taken by the Synchronous Meteorological Satellite 2, and the Mariner and Voyager 1 and 2 space probes, the TIROS VIII meteorological satellite, and a 1970 solar eclipse seen over Wallops Station. In overall very good to fine condition, with creases, chips and wear to edges, and some photos bearing editorial marks and notations to the image side.