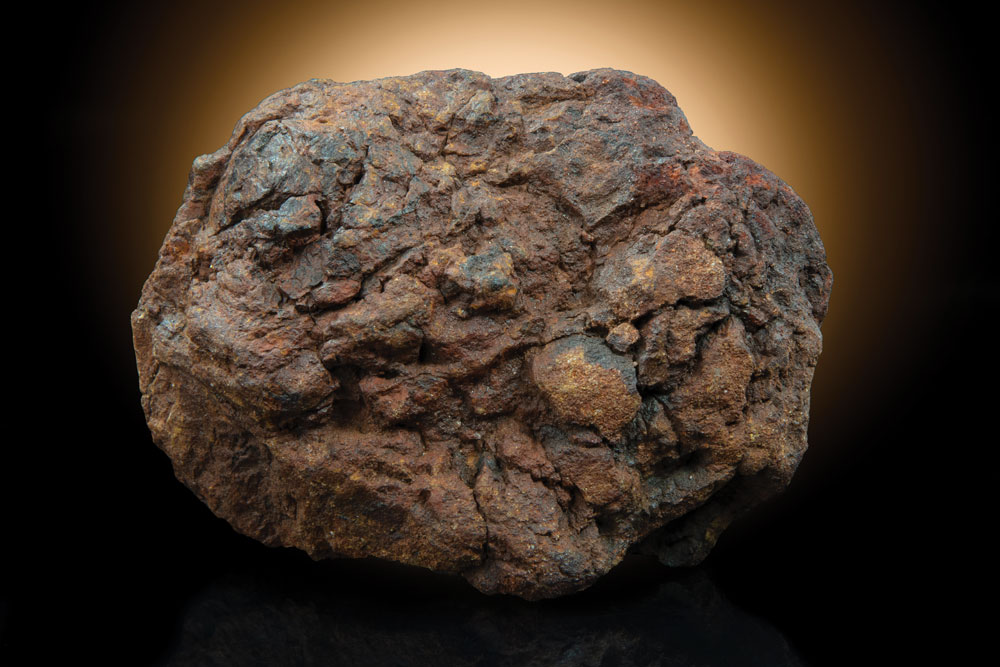 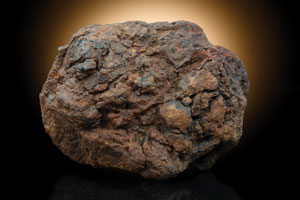 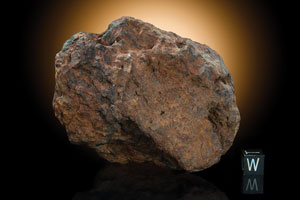 Iron meteorite. IIIAB. Western Australia, first recognized 1947. Complete weathered individual. Weighing 391.8 grams and measuring 94 mm x 72 mm x 44 mm. If there ever was a meteorite history story that has it all, it may well be Wolf Creek. While perhaps not the prettiest of meteorites to look at, Wolf Creek has an extraordinary backstory. Meteorites have been through a lot: they likely survived an asteroidal collision and / or ejection from their parent body by another meteorite impact. They have been chilled to near absolute zero in deep space, partially melted by their subsequent fall to Earth, survived an impact with our planet and—in many cases—gone on to endure cutting, grinding, or other academic processes in the laboratory.

As a result, you might imagine that crater-forming iron meteorites would be tough enough to last forever...but you would be wrong. There are close to 200 officially recognized meteorite craters on Earth, but only about 15 of those have produced actual meteorites. This is due to the fact that, despite their resilience and density, even nickel-iron meteorites will weather away given enough time—and most craters on Earth are extremely old, in the millions of years.

Wolf Creek (sometimes spelled “Wolfe Creek”) was, for decades, believed to be about 300,000 years in age, making it the second-oldest crater (after Monturaqui, Chile) to have generated recoverable meteorite fragments. In comparison, Arizona’s celebrated Meteor Crater is an estimated 25,000 to 50,000 years old, while the Henbury Crater field in Northern Australia is only about 4,500 years old. Recent work using exposure dating (how long a rock on Earth has been subjected to cosmic radiation) has revised Wolf Creek’s estimated age to about 120,000 years. It still retains its place as the second-oldest crater to have produced meteorites, and it is also the second largest, after Canyon Diablo.

But Wolf Creek doesn’t only interest meteorite researchers and collectors. It is a site of mythic cultural importance and has long been revered by Aboriginal Australian peoples as a sacred locale. Known to Aborigines as “Kandimalal,” the crater has many times been represented in spiritual paintings. It features in Aboriginal Dreaming mythology, which relates that the crater’s circular shape was created when a giant rainbow snake emerged from the ground. Intriguingly, another regional myth tells that Wolf Creek is the place where the evening star fell out of the sky and landed on Earth!

As Wolf Creek is at the far end of the scale demonstrating how long meteorites can physically survive on Earth, it has scientific interest. Specimens are reddish-brown in color and terrestrialization has resulted in them taking on a characteristic desert rose-like aspect and shape, as is well demonstrated by this example of 391.8 grams.

Wolf Creek is a must-have for those who collect iron meteorites associated with craters, or historic meteorites, but specimens are difficult to obtain. Given the crater’s spiritual, religious, and historic importance, it is now illegal to remove meteorite material from the site or, in fact, to export any meteorites from Australia without written government approval (Note that this specimen was legally exported with an official permit). Wolf Creek features in modern mythology as well: It gave its name to, and is seen, in the Greg McLean horror film from 2005 as well as a sequel, Wolf Creek 2 (2013). And one last intriguing fact: Wolf Creek was first recognized by scientists in 1947—the same year the Sikhote-Alin meteorite fell to Earth [SEE LOTS 2460 to 2462], forming the world’s largest crater field. In other words, Wolf Creek is the sacred space rock that has it all. Accompanied by a certificate of authenticity from Aerolite Meteorites.