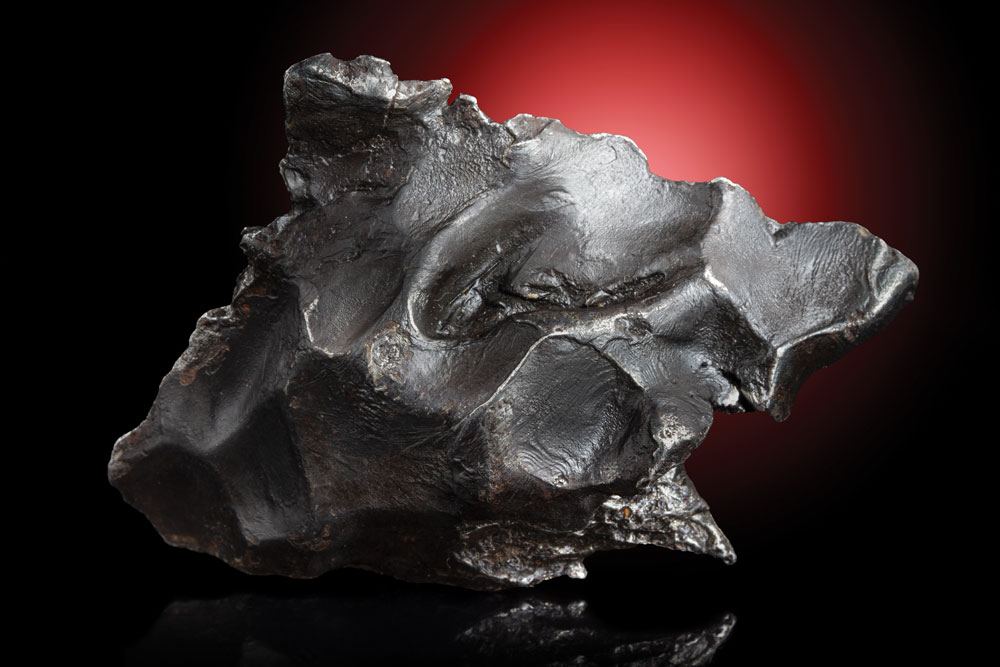 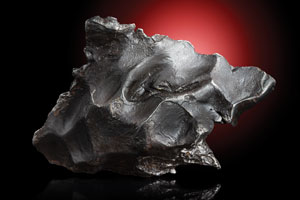 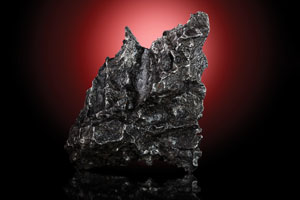 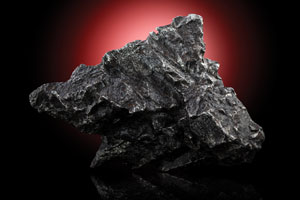 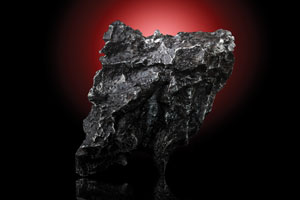 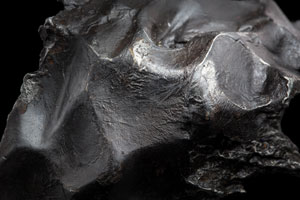 Iron meteorite, IIAB. Witnessed fall February 12, 1947, eastern Siberia. Rare shrapnel / individual hybrid. Weighing 157.8 grams and measuring 73 mm x 58 mm x 26 mm. This rare and very desirable specimen shows characteristics of both shattered (shrapnel) and whole (individual) meteorites, suggesting that it exploded close to Earth’s surface, after initially having its outside sculpted by ablation. One face represents the exterior of a large individual prior to fragmentation, as indicated by the large, overlapping regmaglypts on its surface. The angular reverse face represents the interior and is visible only because the larger mass was torn apart during flight.

It has been rumored in both the film and meteorite worlds that the jagged asteroidal mass seen ominously approaching Earth in the action-packed science fiction blockbuster Armageddon was modelled on the Sikhote-Alin meteorite fall of 1947. And it’s easy to imagine why that might be true. At some time in the distant past and, perhaps as much as 250,000,000 miles from Earth we posit that two asteroids collided. One mass, weighing about 70 tons, drifted through the cold spaces between planets for millions of years, ultimately freezing to minus 454 degrees Fahrenheit.

Two years after the end of the Second World War, on a cold and snowy February evening, the dense mass crashed into the warm atmosphere of planet Earth, at 25,000 m.p.h. or more. The shockwave reportedly knocked over forest workers, as twisted shards of metal rained down among snowy pines. Melted, torn, and blasted, these fragments so resembled the remnants of wartime bombing that they were named shrapnel. Others landed as complete pieces, their surfaces rounded and sculpted by ablation into fantastical shapes, and covered or partially covered with scalloped indentations called regmaglypts or thumbprints. These sculpted pieces, known as individuals, present beautiful natural formations and comprise only about 20% of all recovered masses.

The fall site was studied in detail and Russian academics excavated 180 of 200 identified impact pits and craters. In later years, amateur and professional meteorite hunters scoured the fall site using metal detectors while braving ticks, snakes, Siberian tigers (and, some claim, the Russian mob). But the site, now thoroughly hunted, is exhausted and no new meteorites from this—the world’s largest crater field—are to be found. And the extent of that crater field has often been cited as an example of why we must take steps to protect Earth from future asteroid impacts; had such an impact occurred in a densely-populated area, the effects would have been devastating.

An easy favorite among experienced collectors, Sikhote-Alin is an extremely rare witnessed fall iron and many individuals display the classic characteristics of meteorites: regmaglypts, orientation, rollover lips, and even impact pits from in-flight collisions with other meteorites. These intriguing visitors from space are survivors from the greatest meteorite fall in recorded history. Accompanied by a certificate of authenticity from Aerolite Meteorites.