Never-before-seen handwritten lyrics from Dylan, penned after a visit with Woody Guthrie in May 1962 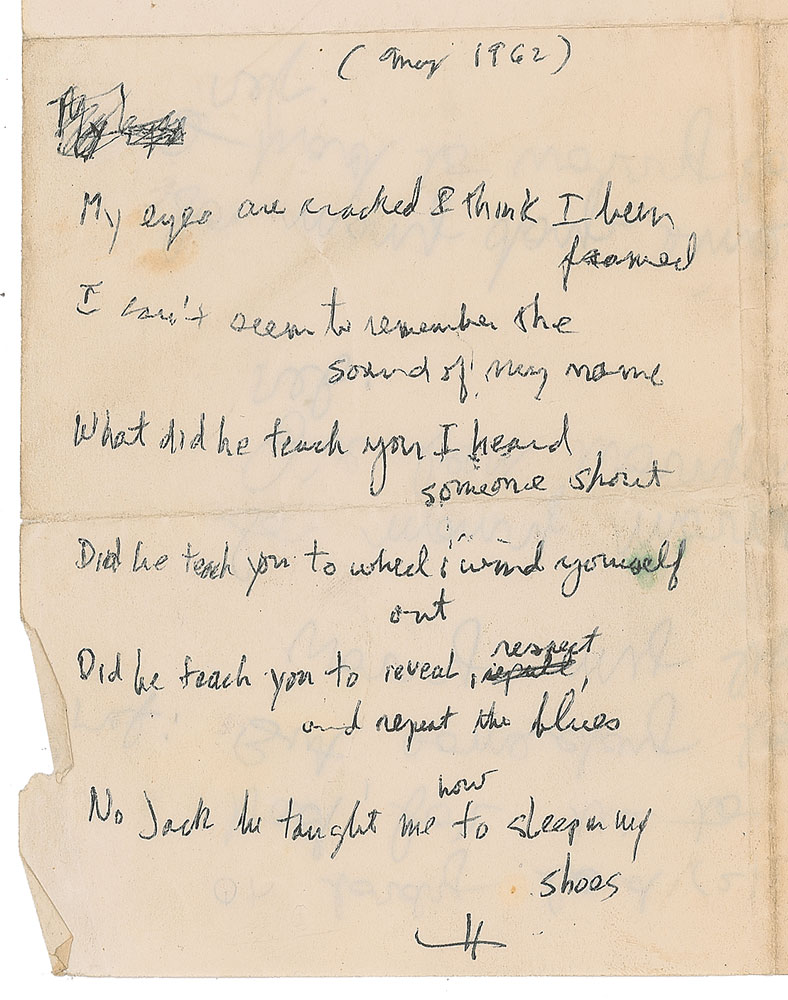 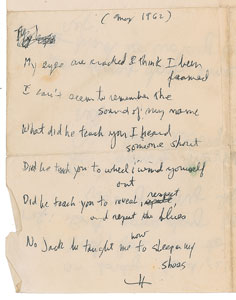 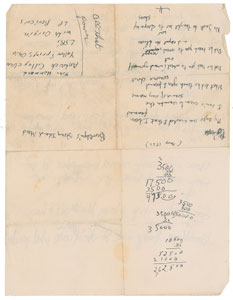 Never-before-seen handwritten lyrics from Dylan, penned after a visit with Woody Guthrie in May 1962

Handwritten lyrics and notes by Bob Dylan, accomplished in black ballpoint on an off-white 8.5 x 11 sheet, unsigned, May 1962. The lower left panel of the sheet features lyrics to an untitled song, which reads, in full: “My eyes are cracked I think I been framed / I can’t seem to remember the sound of my name / What did he teach you I heard someone shout / Did he teach you to wheel & wind yourself out / Did he teach you to reveal, respect, and repent the blues / No Jack he taught me how to sleep in my shoes,” with Dylan adding the date above “(May 1962).” In the adjacent right panel, Dylan has penned an apparent song title, “Brooklyn’s Stony Island Mind,” and upside down in the upper left panel Dylan has jotted down a variety of math equations. Notes in the lower right panel, “John Hammond, Antioch College, Ohio, Yellow Springs, Ohio, LSR’s, with Origin, LP Reviews, all that power,” are in another hand, and the reverse of the sheet features handwritten lyrics for the blues standard ‘Worried Life Blues,’ which is accomplished in pencil in an unknown hand (ostensibly John Hammond, Jr.). In very good to fine condition, with soiling, ceasing, and intersecting folds.

These lyrics directly originate from a road trip made by Dylan, Dave Glover, and John Hammond, Jr., when the trio visited Woody Guthrie at the Brooklyn State Hospital in the spring of 1962. Although the title to the right, “Brooklyn’s Stony Island Mind,” is likely a play on Guthrie and his former Coney Island home, the lyrics are actually about Dylan’s experiences with blues legend Big Joe Williams, who Dylan mentions in a letter to Glover dated February 16, 1962, which is also being offered as part of the Glover Collection.

In an interview transcript for the 2005 documentary No Direction Home, Glover affirms that Dylan wrote these lyrics from the backseat on their return trip to Greenwich Village: ‘[Hammond] was driving, I was in the front seat, and Bob was in the back. And at some point he started scribbling out something on a piece of paper...It was like a little poem thing. We were talking about Big Joe Williams. Cause he’d met Big Joe in Chicago, and I played with Big Joe Williams [too]...And I thought [the lyrics] really summed up Big Joe Williams, you know, and Bob’s attitude towards it too.’ Unpublished lyrics by Dylan are exceptionally rare, with this example all the more impressive given its early date and its intimate association to not one but two musical idols.