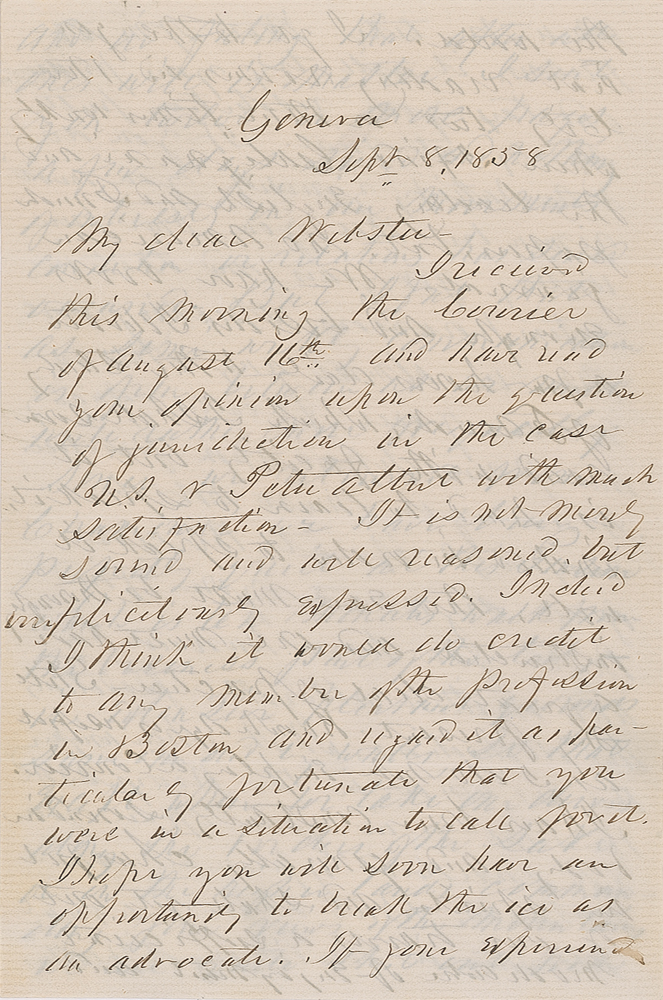 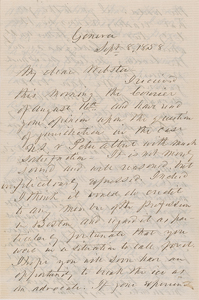 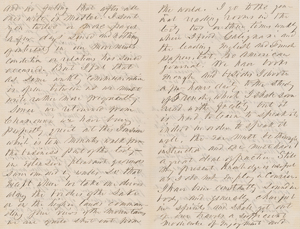 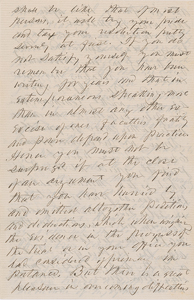 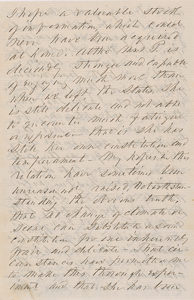 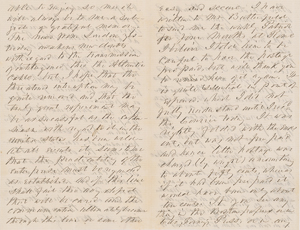 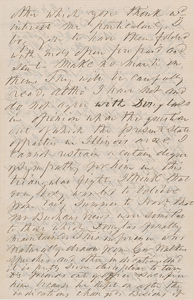 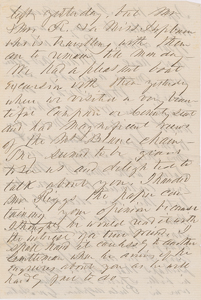 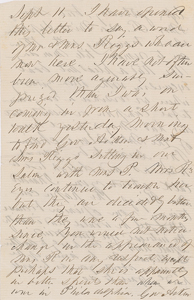 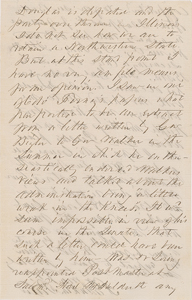 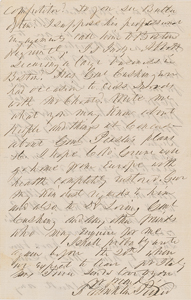 Lengthy ALS, twelve pages, 5.25 x 8.25, September 8 and 11, 1858. Written from Geneva, Switzerland, a letter to his former private White House secretary Sidney Webster, in part: "I received this morning the Courier of August 16th and have read your opinion upon the question of jurisdiction in the case of U.S. v. Peter Albert with much satisfaction. It is not nearly sound and well reasoned, but implicitly expressed. Indeed I think it would do credit to any member of the profession in Boston and regard it as particularly fortunate that you are in a situation to call for it. I hope you will soon have the opportunity to break the ice as an advocate. If your experience shall be like that of most persons, it will try your pride and tax your resolution pretty severely at first. If you do not satisfy yourself you must remember that you have been writing for years and that in extemporaneous speaking more than in almost any other exercise of ones faculties, facility and power depend upon practice. Hence we must not be surprised if at the close of an argument you find that you have hurried by and omitted altogether positions and deductions, which when weighing the evidence in the progress of the trial or in your office you had considered of primary importance. But there is a great pleasure in overcoming difficulties and in feeling that after all one's will is master.

I sent you twelve or more pages a few days since and nothing of interest in our movements condition or relations has since occurred. But I feel that as since weekly communication is open between us we must write rather more frequently. Since we returned from Chamonni we have been perfectly quiet at this Pension which is ten minutes walk from the business part of the city, in extensive pleasant grounds surrounded by walls, so that, except when we take our drives along the borders of the lake or in the higher lands commanding fine views of the mountains we are quite shut out from the world. I go to the general reading rooms in the City two or three times weekly where I find Galignani and the leading English and French papers, but, no American journal. We have books enough and besides I devote a few hours daily to the study of French, which I shall soon read with facility but it is hard to learn to speak it, indeed in order to speak it well, the ear must be thoroughly instructed and one must have great deal of practice. Still my present knowledge is useful as I do not employ a courier.

I have been constantly sound in body and generally cheerful in spirit and shall get out of our travels a sufficient modicum of enjoyment and I hope a valuable stock of information, which could never have been acquired at home. Altho' Mrs. P. is decidedly stronger and capable of enjoying much more than when we left the states she is still delicate and not able to encounter much fatigue or exposure, that is she still has her own constitution and temperament. My hopes in this relation have sometimes been…raised, notwithstanding the obvious truth, that no change of climate or scene can substitute a sound constitution for one inherently frail and delicate. That circumstances have permitted me to make this thorough experiment and that she has been able to enjoy so much will always be to me a subject of grateful memory.

The news from London yesterday awakens new doubts with regard to the transmission of intelligence thro' the Atlantic Cable, but, I hope that the threatened interruption may be quite removed and that the truly great experiment may be as successful as the enthusiasm with regard to it in the United States has been wild. At all events it seems to me that the practicality of the enterprise must be regarded as established, and if this line shall fail thro' any defect that will be cured and the communication ultimately become through this line or some other easy and secure.

I've written to Mr. Butterfield to send me the weekly Patriot for four months at Rome. I believe I told him to be careful to have the postage prepaid, but will thank you to remind him yet again. It is quite essential in point of expense, which I did not fully understand until I recd' the Courier today…If you see anything in the Boston papers or in Colo. Forney's Press, or in any other which you think wd. interest me particularly I beg you to have them folded with ends open prepaid and sent. make no mark in them. They will be carefully read although I have not and do not agree with Douglas in opinion upon the question out of which the present state of parties in Illinois move, I cannot restrain a degree of sympathy for him in this triangular fight. I think that everybody wanted to believe from early summer to Novr. that Mr. Buchan's views were similar to those which Douglas finally maintained. The inference was naturally drawn from Gov. [Robert J.] Walker's [territorial governor of Kansas] speeches and other indications, and it is pretty severe discipline to turn D's friends out of office & sacrifice him because he kept on after the indications changed. Besides if Douglas is defeated and the party overthrown in Illinois I do not see how we are to retain a northwestern state. But at this point I have no very ample means for an opinion." Pierce follows with another message on September 11th, mentioning the visits of "Mr. & Mrs. Riggs," "Gov. Aiken," and "a Miss Hepburn." In fine condition.

Pierce’s “sympathy” for incumbent Illinois Senator Stephen A. Douglas was not without reason; despite Pierce snatching away his nomination hopes at the 1852 Democratic National Convention, Douglas campaigned tirelessly for Pierce across the Midwest, assisting him in his defeat of Whig candidate Winfield Scott in that year’s presidential election. The “triangular fight” to which Pierce refers is presumably Douglas’s uphill battle for his Senate reelection, simultaneously appealing to the masses while warding off the rise of Republican Party candidate Abraham Lincoln, with whom he shared the famed ‘Lincoln-Douglas debates of 1858,’ and the enmity of President James Buchanan, a Democratic rival with whom he clashed over the admission of Kansas as a slave state. Douglas, ultimately, emerged victorious, earning 54 electoral votes to Lincoln’s 46 in the 1859 Illinois election.