Sun Yat-sen on fundraising for humanitarian aid and the Kuomintang party through "theatrical plays, a Tag Day, a bazaar which lasted a week and carried on entirely by women" 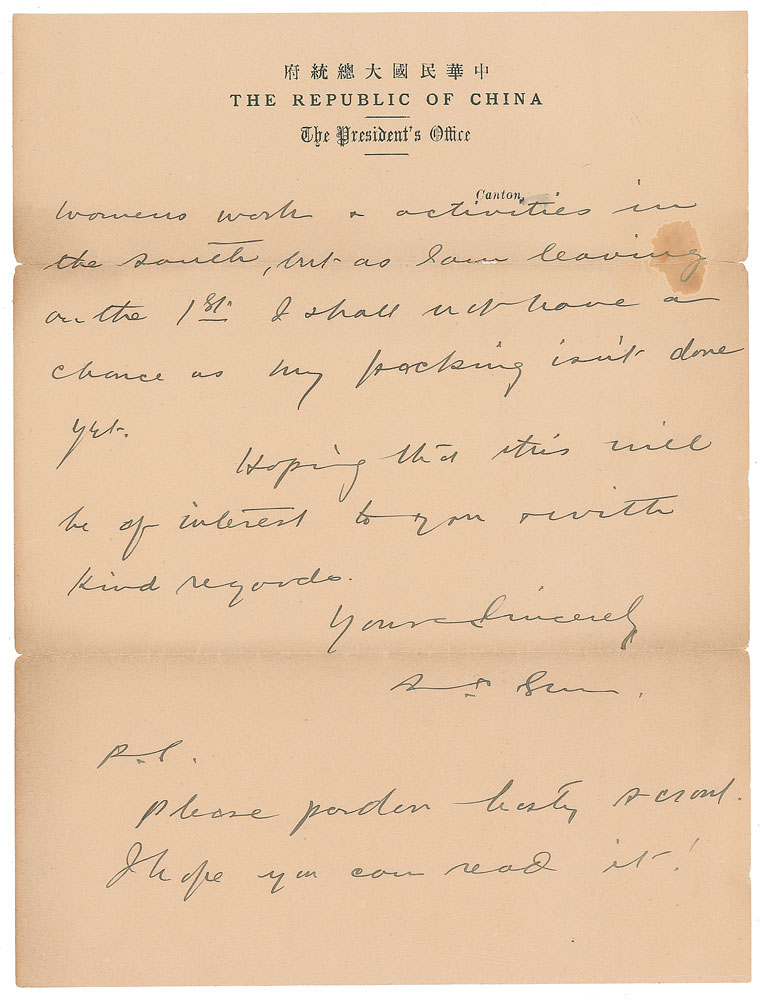 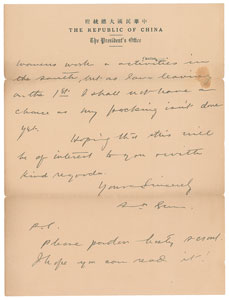 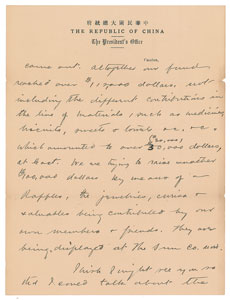 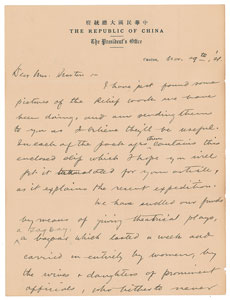 Previous Lot
Next Lot
This lot has closed
Estimate: $100000+

Sun Yat-sen on fundraising for humanitarian aid and the Kuomintang party through "theatrical plays, a Tag Day, a bazaar which lasted a week and carried on entirely by women"

Founding father and first president of the Republic of China (1866-1925). ALS in English, signed “Y-S Sen,” three pages, 8 x 10.5, The Republic of China, President's Office letterhead, November 29, 1921. Letter to the journalist Mrs. Morton, regarding acts of humanitarian relief, photos of which he has just encountered and is sending her, along with a document explaining his recent failed Northern Expedition. He also discusses their success in raising money for humanitarian aid and for the Kuomintang party by organizing various events, such as theatre performances and a bazaar. He finishes by expressing his regret not being able to meet with her and discuss women’s actions in southern China due to his departure two days later. In full: "I have just found some pictures of the Relief work we have been doing, and am sending them to you as I believe they’ll be useful. In each of the packages there contains this enclosed slip which I hope you will get it translated for your article, as it explains the recent expedition. We have swelled our funds by means of giving theatrical plays, a Tag Day, a bazaar which lasted a week and carried on entirely by women, by the wives & daughters of prominent officials, who hitherto never come out. Altogether our fund reached over $112,000 dollars, not including the different contributions in the line of materials, such as medicines, biscuits, sweets and donuts &c, &c, which amounted to over $30,000 dollars, at least. We are trying to raise another $100,000 dollars by means of Raffles, the jewelries, curios & valuables being contributed by our own members & friends. They are being displayed at the Sun Co. now. I wish I might see you so that I could talk about the women's work & activities in the south, but as I am leaving on the 1st I shall not have a chance as my packing isn’t done yet. Hoping that this will be of interest to you & with kind regards…P.S. Please pardon hasty scrawl. I hope you can read it!" In fine condition, with a small stain to the last page, and some short splits to the fold ends.

The "Sun Co." mentioned was a retail concern founded in Sydney, Australia, by the Chinese expatriate Cai clan who gradually expanded their operations to mainland China. In 1912, a Sun Co. store opened in Hong Kong, and another in 1916 in Guangzhou. Following their success in the south, the Sun Co. expanded to Shanghai in 1936: their enormous department store on Nanking Road boasted the first passenger escalators in the Far East. A fascinating and significant letter by Sun Yat-sen.