Between meals with John Singer Sargent, Monet takes in Queen Victoria's state funeral: "What luxury of gold and colours, and the gala carriages, the teams of horses. My eyes nearly hurt" 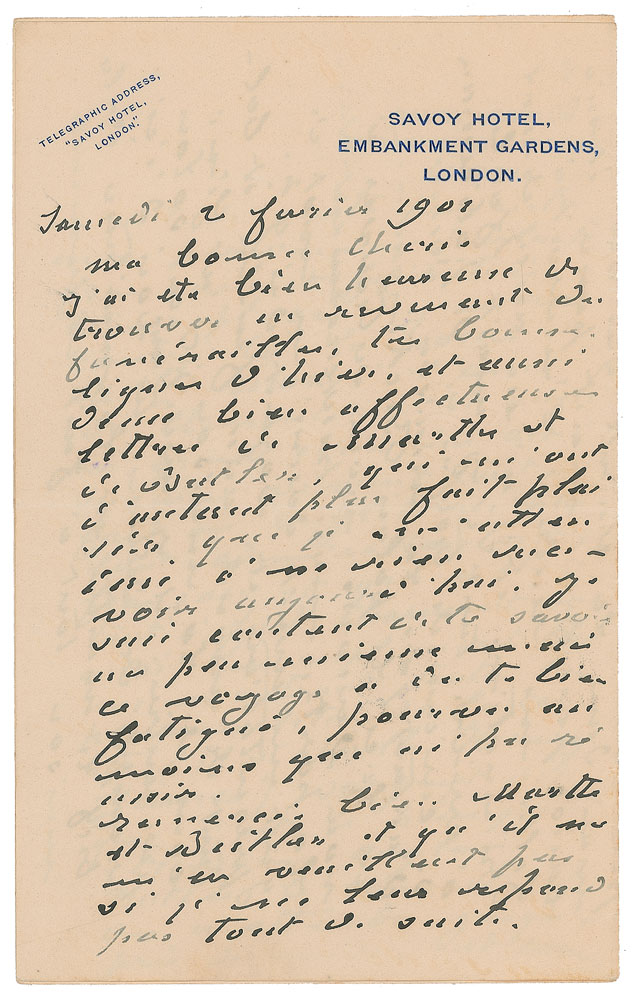 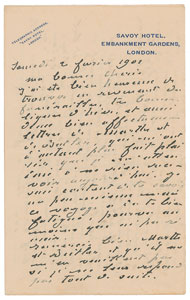 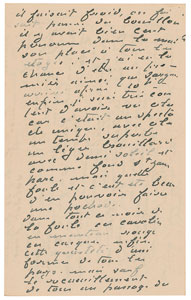 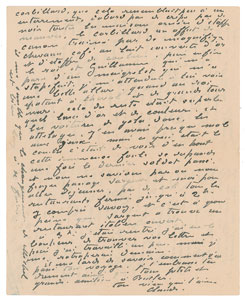 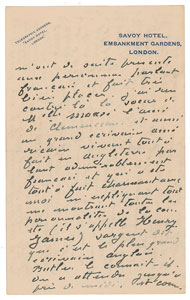 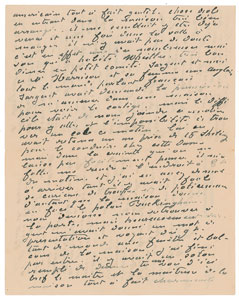 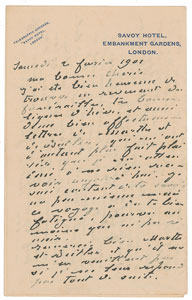 Between meals with John Singer Sargent, Monet takes in Queen Victoria's state funeral: "What luxury of gold and colours, and the gala carriages, the teams of horses. My eyes nearly hurt"

ALS in French, signed “Your old man who loves you, Claude,” eight pages on two sets of adjoining sheets, 5 x 8, Savoy Hotel letterhead, February 2, 1901. Lengthy letter to his wife Alice, commenting on the funeral of Queen Victoria (which he had observed earlier that day), meeting the writer Henry James, and attending a dinner hosted by John Singer Sargent at a house once occupied by James McNeil Whistler. In part (loosely translated): "When I came back from the funeral, I have been very happy to find your good lines of yesterday, as well as two affectionate letters of Marthe and of Butler, which have given me more joy as I did not expect to receive something today. I am content to know that you are a little better, but this journey must have distressed you…Give my thanks to Marthe and Butler and that they won’t take amiss if I don’t reply to them immediately.

Now I have to return behind, to give you an update of my deeds and exploits. Thursday, dinner, Hunter, still charming, is endearing, dinner in a very chic restaurant at Piccadilly, all the ladies in black, décolleté costumes. And you can imagine the extravagance of Mme Hunter and her daughter. Besides that a very cheerful dinner and finished the evening at her’s. She had come for the funeral, tomorrow in Germany, and she will be in London again the 12th, this time with her married daughter and her son-in-law, the brother of Mr. Williamson, who has asked after you…

Yesterday evening, quite charming dinner at the friend’s of Sargent, an American painter, quite nice. Strange thing: As I entered the very well-arranged house, it seemed to me that I had been there before, and once in the dining room, there was no doubt. It is indeed one of the numerous houses in which Whistler has lived. Very good dinner in small company, Sargent and me and Mr. Harrison and his wife, an Englishwoman, everybody talking French.

Sargent had asked the permission to take me to a house to see the funeral cortege, but the difficulty consisted in re-joining each other in the morning to go there and the impossibility to find a cab this morning. He had reserved one for the price of 15 shillings to take him to that lady. But in fear that one wouldn’t let me easily pass, I had to repair to the place at 8 o’clock in the morning. And I had quite difficulties to arrive there, as there were so many watchers, soldiers and policemen, all the more because the house is facing the Buckingham Palace. We should have met at the door, but fortunately Sargent had given me a password, and seeing at 9 o’clock already so many people at the windows and balconies, I finally entered the house. There was a parlour full of ladies—you see me. Now in short: The master and the mistress of the house, very charming, indeed, presented me to French speaking people and placed me very well. I met there the sister of Miss Monsé, the friend of Clemenceau, as well as a great American writer, living in England, indeed, speaking French admirably well and who was charming with me, indeed, explaining to me everything, showing to me all the personalities of the society (his name is Henry James). Sargent says that he is the greatest English writer. Does Butler know him? We waited until after noon. And as it was cold, one let pass a soup. There were about 100 people in the building, distributed on all floors. And I was lucky to be on the first one, as well as Sargent, who finally arrived after 10 o’clock. I’m very content to have seen this, for it was a unique spectacle, at the same time excellent weather, a light mist with a half-sun and as setting the St. James Park, but what a crowd! And it would have been fine to make a sketch of it.

In all the blackness of the crowd these horsemen in red cloaks, with helmets, moreover this quantity of uniforms of all countries. But apart from the contemplativeness of everyone during the passage of the hearse, all this scarcely resembled a funeral. At first no crepe, no black, all buildings decorated with mauve cloths, the hearse was a gun carriage drawn by magnificent horses, white coffee covered with gold and coloured cloths. Then finally the king and William, who appeared to me astonishingly slim. I expected him to have an elegant appearance. Regarding the king, impressing on his horse and by his big stature, that was furthermore excellent. What luxury of gold and colours, and the gala carriages, the teams of horses. My eyes nearly hurt. But the high point was to watch from above that immense crowd dissipating once the last soldier had passed. And we didn’t know where to blaze a trail, Sargent and me, to go to lunch. No cab, all the restaurants closed until 2 o’clock, the Savoy, too. Narrowly Sargent found an open Italian restaurant.

I was back at 3 o’clock. I had the luck to find your letters and then I have worked a little. But I will recommence tomorrow. I long to know how your journey has been. I tenderly embrace you, as well as all the small and big ones. Greetings to Butler." In fine condition. Accompanied by an export certificate from the French ministry of culture. Boasting a multitude of art-world associations and offering splendid first-person impressions of a historically significant event—the funeral of the UK's then-longest-reigning monarch—this is a truly remarkable letter by one of history's great painters.