Armstrong and Asimov, lecturers aboard the 'Voyage to Darkness' solar eclipse cruise 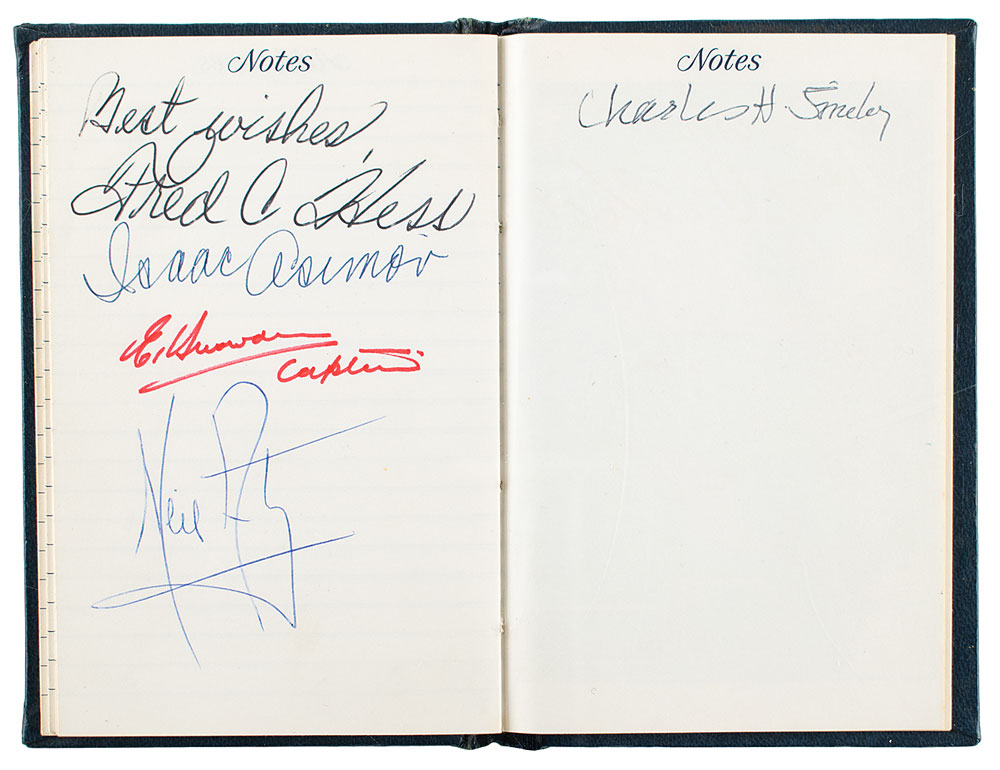 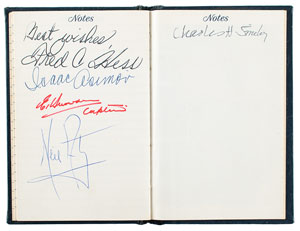 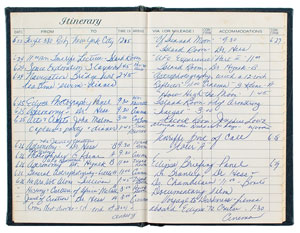 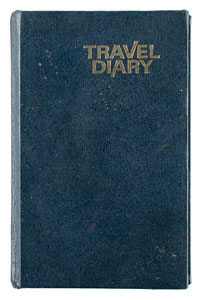 Armstrong and Asimov, lecturers aboard the 'Voyage to Darkness' solar eclipse cruise

Leather-bound travel diary, 4 x 6.25, carried aboard the SS Canberra during its 1973 voyage to Africa to witness a total solar eclipse, signed inside on the same page in ballpoint, “Neil Armstrong” and “Isaac Asimov.” The page is also signed by astronomer Fred Hess and the ship’s captain, Eric Snowden, with the adjacent page signed by astronomer Charles Hugh Smiley.

June 24th - “Everyone was excited at seeing Scott Carpenter; cameras clicked endlessly for 5 minutes. His lecture was uninteresting and he ventured into oceanography the last ½ hour.”

June 25th - “After lunch we heard Isaac Asimov; he’s a very good speaker, but his hair is absolutely terrible. ‘Ancient View of the Universe’ was the subject.”

June 27th - “After lunch we had our first lecture with Neil Armstrong, boy, did the cameras go off! At one point, there were so many flashes that it looked like he was in a room with a psychedelic strobe light! He is not as good as Isaac Asimov or Dr. Hess—went into a lot of technical detail. Much better than Scott Carpenter though.” In fine condition.

On June 22, 1973, the fully booked SS Canberra and ‘Voyage to Darkness’ cruise departed New York City and set course for the West African coast to intercept one of the longest total solar eclipses of modern times. A week later, on the morning of June 30th, the moon moved in front of the sun and created a lunar shadow that caused more than a 100-mile wide path of totality, which began off the South American coast, moved east across the Atlantic Ocean and the African continent, and halted somewhere over the Indian Ocean. Among the Canberra's distinguished lecturers were Apollo 11 moonwalker Neil Armstrong, Mercury astronaut Scott Carpenter, and science writer Isaac Asimov, who chronicled his first eclipse experience in his autobiography In Joy Still Felt.

In a subsequent letter, Asimov wrote of the cruise: ‘I was on the Canberra en route to the shores of Africa to see a total eclipse of the Sun. The trip there and back included 16 days of lectures and astronomy-related activities. Ted Pedas was Education Director of the cruise and it was owing to his organizational ability and endless hard work that everything went as smoothly as a well-oiled machine. Years later, I still meet people who recall the cruise and the success it was. Never did so many people have so steadily good a time without any of the activities usually associated with a cruise. They were being educated and loving it.'