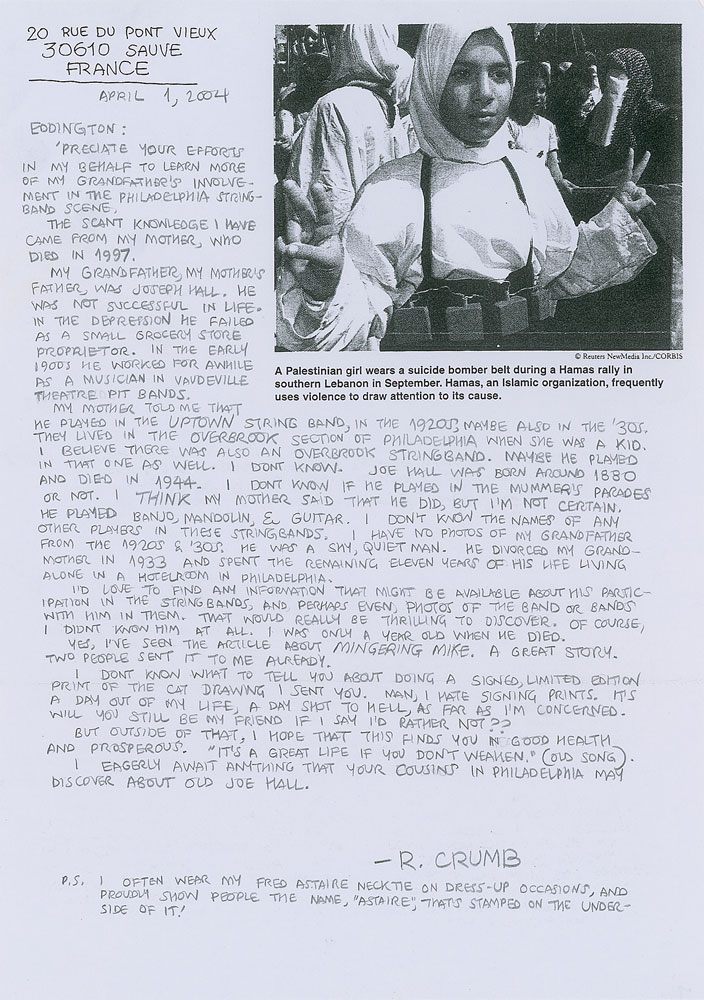 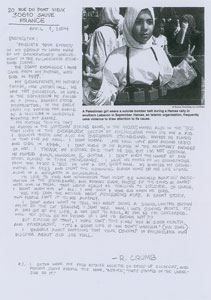 ALS in pencil, signed “R. Crumb,” one page, 8.25 x 11.75, personal stationery sheet (with image of a Palestinian girl during a Hamas rally), April 1, 2004. Written from Sauve, France, a letter to Utah artist and Highland High School art instructor Patrick Eddington, in part: "'preciate your efforts in my behalf to learn more of my grandfather's involvement in the Philadelphia string band scene. The scant knowledge I have came from my mother, who died in 1997. My grandfather, my mother's father, was Joseph Hall. He was not successful in life. In the Depression he failed as a small grocery store proprietor. In the early 1900s he worked for a while as a musician in Vaudeville theatre pit bands. My mother told me that he played in the Uptown String Band, in the 1920s, maybe also in the '30s. They lived in the Overbrook section of Philadelphia when she was a kid. I believe there was also an Overbrook string band. Maybe he played in that one as well. I don't know. Joe Hall was born around 1880 and died in 1944. I don't know if he played in the mummer's parades or not. I think my mother said that he did, but I'm not certain. He played banjo, mandolin, & guitar. I don't know the names of any other players in these string bands. I have no photos of my grandfather from the 1920s & '30s. He was a shy, quiet man. He divorced my grand mother in 1933 and spent the remaining eleven years of his life living alone in a hotel room in Philadelphia. I'd love to find any information that might be available about his participation in the string bands, and perhaps even photos of the band or bands with him in them. That would really be thrilling to discover. Of course, I didn't know him at all. I was only a year old when he died. Yes, I've seen the article about Mingering Mike. A great story. Two people sent it to me already. I don't know what to tell you about doing a signed, limited edition print of the cat drawing I sent you. Man, I hate signing prints. It's a day out of my life, a day shot to hell, as far as I'm concerned. Will you still be my friend if I say I'd rather not??" Crumb adds a brief postscript at the conclusion: "I often wear my Fred Astaire necktie on dress-up occasions, and proudly show people the name, 'Astaire,' that's stamped on the underside of it!" In fine condition. Accompanied by the original hand-addressed mailing envelope, with Crumb incorporating his surname in the return address field.